FETO's Civil Administrators and their Trips Abroad before the Coup Attempt

The trips, relationships, meetings and other evidence are strong enough to prove FETO members’ finger in the coup attempt, whereas the false denials of this evidence just functions as another form of evidence, which shows how the group members still continue to utilize a common tactic to escape punishment. 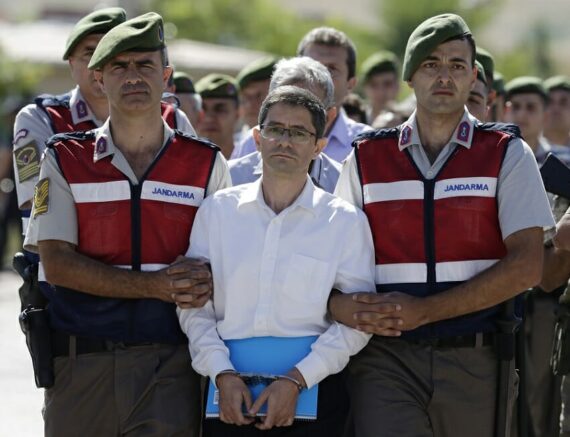 On 15th of July 2016, a coup attempt was foiled in Turkey that was allegedly carried out by the Fetullah Gülen Terrror Group (FETO), led by Fetullah Gülen, the cult leader living in the US. Indeed, the group’s bad record on democracy is not new. Previously Gülen had openly supported the September 12, 1980 military coup with his article “Son Karakol” (“The Last Outpost”) published in the Sızıntı Magazine on October 1, 1980 – the first FETO publication that began in 1979. During the post-modern military coup of February 28, 1997, which targeted Necmettin Erbakan, the Prime Minister of Turkey and the leader of the Welfare Party, Gülen presented the pro-military Hürriyet daily with the headline: “You botched, just submit”. However, this attitude was interpreted by many as an effort by the group to establish a good relationship with the “real” authority in the country, rather than interpreting it as a sign of the group’s tendency to overtake the whole military institution to rule over the country. The group was going to try a military coup nearly two decades after, but this time by themselves.

During the coup attempt, FETO employed its civil administrators, called imams, who functioned under a strict organizational hierarchy that enabled them to exercise effective control over its affiliated state personnel. These imams were appointed as supervisors to various judges, prosecutors, military and police officers, who submitted to their commands. Hierarchical statuses of imams over these personnel were determined according to their closeness to Fetullah Gülen, to whom supernatural powers were attributed.

The Role of Civil Administrators in the Planning of the Coup

The most extensive indictment on the July 15 coup attempt, the Akıncı Indictment classifies the civilians at the Akıncı Airbase, the headquarters of the coup attempt, into two categories: “Civilian Suspects” and “Civilian Administrator Suspects”. Fetullah Gülen, Adil Öksüz, Kemal Batmaz, Hakan Çiçek, Nurettin Oruç and Harun Biniş are named as civil administrator suspects. Civil administrator suspects were caught together with the military personnel at the Akıncı Airbase on the morning of July 16, 2016.

These figures were caught on security footage and there are testimonies about their presence at the airbase. They are purported to have dictated who was going where, which actions were to be taken and which targets were to be attacked with helicopters and warplanes carrying high-ranking officers at the mess of the 143rd Fleet at Akıncı Airbase. Hakan Çiçek, a suspect, has accepted that he was present at Akıncı Airbase, claiming that he was invited there for a social event by Commander Ahmet Özçetin, who is another suspect of this case. According to the indictment, they were actively involved in the preparation of the coup.

Testimonies recorded in the indictments state that the coup was planned at secret meetings led by Adil Öksüz, who was to inform Gülen about these meetings. Öksüz is claimed to have organized meetings abroad as well. Along with confessions and testimonies, the embankment analysis and flight records of Öksüz support these claims. Adil Öksüz is among the most prominent names in FETO and among the closest persons to Gülen. Demonstrating their relationship, investigations have revealed that there is footage in which Öksüz was sitting in Gülen’s chair, with a group of children as an audience.

Attending the last meeting on July 9, 2016, Lieutenant Colonel Turgay Sökmen asserted that “a coup preparation with the participation of all forces was underway, that he would continue his work where he was going and that there weren’t any issues”. Öksüz led the prayer before the meeting and spoke on religious subjects. In one of his speeches, he said that “one of the first things to do on July 15 was to free [FETO] members out of the prisons they are incarcerated with the forces that was tasked with this duty”. In another speech, he said “my friends, I have just spoken with our elder [Fetullah Gülen], he sends his regards to all of you. I will be leaving for Istanbul on Saturday or Sunday and then will go abroad. If everything is fine, I will be seeing our elder on Tuesday and will return here on Wednesday or Thursday”.

Rear Admiral Halil İbrahim Yıldız, talking about the same meetings, said that there were some preparation meetings in Ankara and that Northern Sea Area Commander Read Admiral Ömer Faruk Harmancık told him that there was an almost-finished coup plan. Moreover, Harmancık told Yıldız that the plan was to be carried out on either July 15 or 22. According to Yıldız’s statements, during the meeting that Öksüz was present, it was asserted that the coup would take place after 03:00 o’clock. After this, Harmancık told Öksüz that everything was ready and Öksüz suggested he go to the US in order to show the coup plan to Fetullah Gülen in person. There are many testimonies and statements from both suspects and witnesses validating the roles of FETO member civil administrators during the coup preparation process.

There are three important trips abroad by civilian suspects at the same date during the process of preparation for the coup. Suspect Harun Biniş was unable to make these trips as he was being tried at the Ankara 2nd Heavy Penal Court under the charge of illegal wiretapping for FETO/Paralel Devlet Yapılanması (PDY).

The first trip was undertaken when Öksüz, after the first coup preparation meeting on December 27, 2015, travelled to the United Kingdom on December 31. It seems that Batmaz was also in the UK, meanwhile, Hakan Çiçek and Nurettin Oruç were in Germany at that time. It is possible to surmise that they were feeling the pulse of FETO members in other countries right after the coup preparation meeting.

Secondly, after the meeting on March 14, 2016, there was a trip abroad between March 17-21, 2016. Besides FETO administrators Öksüz, Oruç, Çiçek and Batmaz, the highest-ranking suspect General Akın Öztürk’s son-in-law Lieutenant Colonel Hakan Karakuş also joined this travel. Following this travel to the US, it was observed that on the very same day, March 21, 2016, Gülen wore a khaki robe reminiscent of military uniforms and relayed the information on the coup with a secret message embedded in his statement published on the website www.herkul.org

Lastly, two days before the coup attempt, between July 11 and 13, Batmaz and Öksüz travelled to the US on the same plane. This travel is confirmed by entrance-exit analysis and flight records, and it was right before the coup took place. Witness statements assert that the date and hour of the coup approved by Gülen was at 03:00 on July 16. Plane tickets and the security footage also confirm this.

Beside these three important trips, Batmaz has 9 trips coinciding with other coup suspects and 7 of them with Adil Öksüz. Moreover, all civil administrator suspects, including Batmaz, claim that they do not know each other and that this is nothing but a coincidence. This is believed to have been a common tactic utilized by the accused suspects to hide their links to the organization.

Indeed, the footage of Batmaz and Öksüz at the airport two days before the coup shows the following: Batmaz leaving the plane and waiting for Öksüz to leave the plane, then both come together and Batmaz coming towards Öksüz while Öksüz is checking his baggage, talking with each other while walking, Batmaz looking at his back (probably to check whether they are being followed), exiting the airport and walking across the road together. Yet, even though Batmaz accepts that it is him on the footage, he claims he does not know Öksüz; moreover, he states that he does not remember some 925 phone calls he had with Adil Öksüz.

The trips, relationships, meetings and other evidence are strong enough to prove FETO members’ finger in the coup attempt, whereas the false denials of this evidence just functions as another form of evidence, which shows how the group members still continue to utilize a common tactic to escape punishment.

Fatma Sümer graduated from Istanbul University Faculty of Law in 2012. After completing her MA in Public Law, she is currently pursuing her PhD at Marmara University. Sümer is currently a Research Assistant in the Law and Human Rights Directorate at SETA, Ankara.