As part of the investigation Turkey and Russia conducted jointly, Russia asked to examine the PC belonging to Mevlut Mert Altintas with a different method, and eventually the deleted data were found. Among the data, the Russian delegation found that two files were given the title "Fetullah Gulen," 690 files with the title "Hizmet," a term that literally means "service" which FETO calls itself, and four files with the title "FETO." 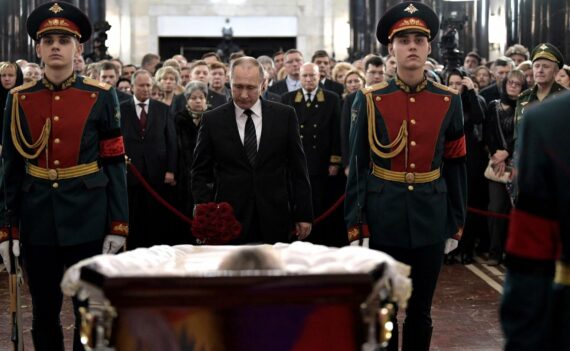 When the Russian Ambassador to Turkey Andrey Karlov was assassinated during an exhibition he attended in Ankara, many groups particularly in the Western media likened the incident to the assassination of the Archduke Franz Ferdinand of Austria, the potential heir to the Austro-Hungarian throne, which triggered World War I. They certainly have a point in drawing such an analogy since many similar assassinations throughout history brought about wars. Also, many claimed that the assassination would cause a serious tension in the volatile and incipient Moscow-Ankara alliance, which did not come out right.

Turkish President Recep Tayyip Erdogan and Russian President Vladimir Putin agreed that the assassination of Karlov was motivated to diminish Turkey-Russia relations. On the night of the incident, both presidents stated that the assassination was a provocation aiming to hamper the normalization process in bilateral relations, adding that they agreed to form a joint committee on the subject. Upon that, a delegation consisting of 18 Russian officials visited Turkey to join the committee that investigated the murder. Putin said that the assassination is surely a provocation and they want to identify who instigated it. Russia bestowed a Hero of Russia honor on Karlov, who was appointed to Ankara three years before his death and endeavored to restore ties between the two countries during his term in office.

The perpetrator, who was obviously aware that he could not stay alive after shooting the ambassador in the art gallery, screamed: “Don’t forget Aleppo, don’t forget Syria” just after shooting Karlov. Police later killed him. The perpetrator, Mert Altıntas, was a 22-year-old policeman who had served in Ankara’s riot police unit. Although his profile did not give any clue about his affiliation to a terror group like Al-Nusra or Daesh, his possible links to these terror groups were investigated. Eventually, the data collected on his background and networks indicated that the hitman was a member of the Gulenist Terror Group (FETO). Although it is not easy for a foreigner to understand, another hint was unraveled which made it clear for Turkish people that it was another typical act of FETO. An episode of a TV series titled Nizama Adanmis Ruhlar (The Souls Devoted to the Order), which was aired in December 2014, on FETO-owned and now defunct STV channel, showed that a Russian Ambassador was assassinated in an art gallery, which is curiously identical to Karlov’s murder.

There were more findings, but they remained insufficient for the prosecutor. The investigation continued. The perpetrator’s PC hard disc was examined but it turned out that all his files were deleted. As part of the investigation Turkey and Russia conducted jointly, Russia asked to examine his PC with a different method, and eventually the deleted data were found. Among the data, the Russian delegation found that two files with the words “Fetullah Gulen,” the leader of FETO, 690 files with the word “Hizmet,” a term that literally means “service” which FETO calls itself, four files with “FETO”, and one file with “Nur Community” were deleted from his computer.

The delegation also searched for the words “Al Qaeda,” “Al Nusra,” and “Daesh” among the deleted files but found no results. Following the meetings held between the Russian delegation and the Ankara Chief Prosecutor’s Office, Ankara Public Prosecutor Adem Akinci, who ran the Turkish leg of the investigation, started the works to identify the FETO unit Altintas was affiliated with. It was found that the person Altintas was answerable to is a teacher who is currently jailed pending trial in Ankara as part of another FETO case. The prosecutor’s office issued an arrest warrant for the person considering his possibility of acquittal.

In a statement released on the subject, the prosecutor’s office expounded that Altintas was a FETO operative and that according to the findings the assassination was organized by FETO. According to the prosecutor’s office, FETO members planned the assassination in a way to show the hitman as an Al Qaeda member for several months before the incident.

The case file has been completed. Upon the demand of the Ankara Public Chief Prosecutor’s Office that has run the investigation on the assassination of Karlov on December 19, 2016, Ankara 2ndCriminal Court of Peace issued arrest warrants for Fetullah Gulen, Serif Ali Tekalan, Cemal Karata, Cengiz Ozkan, Emrullah Uslu, Hamza Sevinc, Murat Tokay and Temel Alsancak for “pre-meditated murder” and “attempt to overthrow the constitutional order.”

Thus, another file has been conveyed to the U.S. as regard to the extradition of Gulen, who currently resides in Pennsylvania, U.S. As the U.S. intelligence service has not collapsed, they must certainly know about this international terror group leader who has been living in the U.S. for 18 years. For Russia, on the other hand, FETO has been labelled as a group “made in the U.S.,”  even when FETO was perceived as a “legitimate” group in Turkey. We will see what happens next.