Putin agreed that the joint work of Russia, Turkey and Iran as guarantors of the Astana peace settlement process for Syria had already given results. He emphasized, however, that the long-term stabilization efforts in Syria should be strengthened, especially with regard to a political settlement. 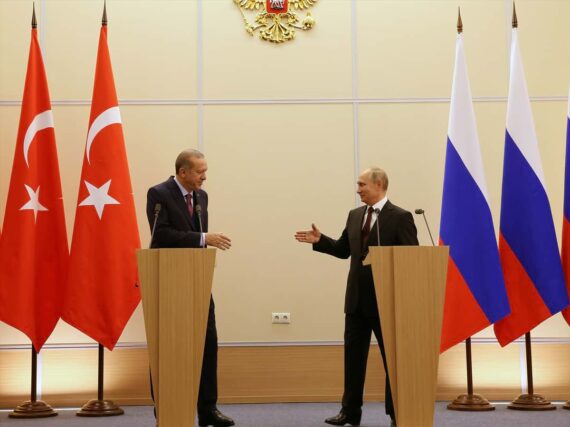 President Erdogan arrived to the Russian Black Sea resort of Sochi on Monday morning. This is Erdogan’s third visit to Russia and the sixth meeting with Putin this year. The two leaders discussed Russian-Turkish bilateral relations, the joint fight against terrorism and the Syrian peace settlement.

Erdogan stated that relations between Ankara and Moscow were pleasing as they have reached “a very advanced level.” During the visit an agreement to focus on political rather than military solutions for Syria was also made.

Putin underlined that bilateral relations between the two states have been restored since the downing of the Russian warplane by Turkey over the southern Turkish border, two years ago.

He added that the two sides are likely to fully compensate the decline that occurred in the trade volume over the last year. The reason behind this optimism is that the trade volume between Turkey and Russia has increased by 36 percent in the first 9 months of 2017.

Emphasizing that certain limitations should be lifted in order to accelerate the increase in trade volume, Putin told reporters that during the meeting with Erdogan, they discussed in detail the issue of removing remaining restrictions on agricultural products.

Affirming his counterpart, Erdogan said that “in order to reach the target we declared as 100 billion dollars, we have to remove all obstacles including the visa before our businessmen. It is of great importance that the visa exemption is restored.”

Turkey’s Akkuyu Nuclear Power Plant to be launched in 2023

President Putin stated that the issues of strategic cooperation were also discussed at the meeting and that the construction of the Akkuyu Nuclear Power Plant is currently on the top of the political agenda.

He said that the construction by Rosatom will begin soon, and that the projected date for the completion of the plant is 2023 – the 100th anniversary of the Republic of Turkey.

Focus on a political solution in Syria

The two leaders also discussed regional and international issues, including recent developments in the Syrian crisis.

“We believe that the Astana meetings and de-escalation zones have contributed to a certain extent to reduction of violence in this region,” Erdogan stated.

“We have agreed that at present, grounds allowing us to focus on the political solution of the [Syrian] issue have emerged,” he said, also pointing out that Ankara stresses the importance of the joint statement by Putin and his US counterpart Donald Trump on Syria, issued after the recent contacts of the two leaders in Vietnam.

Putin agreed that the joint work of Russia, Turkey and Iran as guarantors of the Astana peace settlement process for Syria had already given results. He emphasized, however, that the long-term stabilization efforts in Syria should be strengthened, especially with regard to a political settlement.