“The world is increasingly becoming chaotic, where power relations are less clear, universal values are being eroded and the rule of law is being undermined. Accordingly, it appears that the world is leading into a new order, or a new global dis-order.” 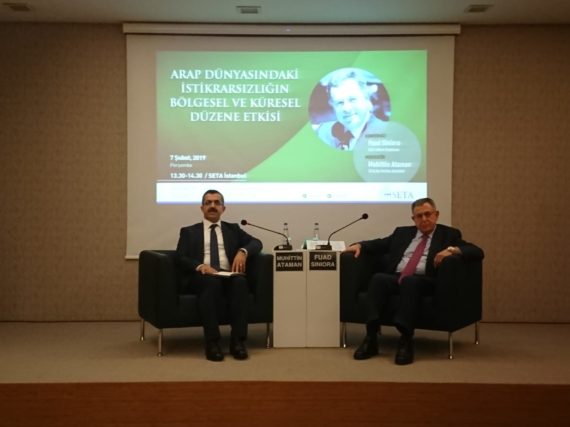 Fouad Siniora attended the SETA Foundation in Istanbul for a special lecture on the Middle East under the title “The Effect of Instability in the Arab World on Regional and Global Stability.”

Fouad Siniora was the former Prime Minister of Lebanon, and governed the country from 2005 to 2008. He stepped down on 9 November, 2009, in favour of Saad Hariri.

After an opening speech of the SETA Foundation’s Director of Foreign Policy Muhittin Ataman, Siniora began his speech by highlighting how he moved from the banking sector into politics, but that he was always fond of politics since his childhood. Prior to his role as prime minister, Siniora was Lebanon’s Minister of Finance and is now the leader of the parliamentary group, the Future Movement.

Fouad Siniora underlined how the world is going through changes and immense repercussions, which he described to a “period that is characterized by the absence of global leadership, less cooperation, more uncertainty and lower levels of trust in national and international institutions.”

“The world is increasingly becoming chaotic, where power relations are less clear, universal values are being eroded and the rule of law is being undermined. Accordingly, it appears that the world is leading into a new order, or a new global dis-order.”

Explaining the current situation in the Arab world and the region’s position in terms of international politics, Fouad Siniora described the Middle East as “the crossroad of three continents and the cradle of major civilizations.”

Siniora listed what he believed the most important events to shape politics to be in the Middle East. Among this list was the 1948 Nakba, the events of 1967, which saw Israel occupy more Arab lands, the invasion of Iraq, the Arab Spring, and the impact of technological evolution in the field of telecommunications, which he believed “led among other things to the collapse of fear and silence” in the region.

According to Siniora, the most important problem of the Middle East is the current Palestine problem. The former PM highlighted how the structural policies of Israel are forcing Palestinians to flee their homes. More, criticizing the U.S. move to recognize Jerusalem as the capital city of Israel and the decision to cancel funding to those in need in the occupied Palestinian territories, Siniora emphasized that the fact that the new definition of Palestinian refugees only include those that were actually born in Palestine, is a structural way to slowly but surely see the dismantling and diminishing of this state.

According to Siniora the invasion of Iraq is what allowed for the region to be characterized by sectarian conflicts. Criticizing Iran for its sectarian policies, he simply stated that “We are all Muslims. What’s going to happen when you convert people from one sect to another. Is this how you are going to measure your success?”

Finalizing his speech, Fouad Siniora insisted on continuous reforms, which will lead to stable growth in the region. For this to happen, according to the former PM, the “Arab world desperately needs new approaches.”