According to Ifop pollsters, Macron is expected to receive 51% of the votes and Le Pen 49% on April 24. However, abstentions in the second round may change this. 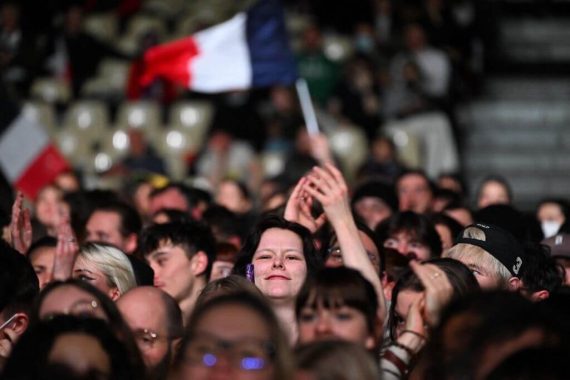 In the first round of France’s presidential election on April 10, incumbent Emmanuel Macron and Marine Le Pen came out on top, securing their places in the second round of voting, which will be held on April 24.

Macron’s result was the best first-round performance for an incumbent president since 1988. He gained more votes than in the 2017 first round. There is no doubt that his warnings of the need to hold voters back from the far right and his role in the Ukraine-Russia war both played a big part in his success.

However, Le Pen also scored higher than in 2017, especially in the last few weeks of her campaign when, instead of putting Muslims on the agenda, she focused on the high costs of living and inflation, something that concerns most voters.

Now, with all the votes counted, Macron has over 27% and Le Pen has less than 23.1%. Far-left leader Jean-Luc Mélenchon came third, with close to 22% of the votes.

Although this year’s election did not exceed the 2002 record levels of abstentions, which stood at 28%, the percentage of voters who abstained this time remained high at 26% which corresponds to 12.8 million from around 49 million eligible voters. This time the abstention rate was higher than in the first round five years ago.

The abstention among the younger population was higher this year than in the previous elections. According to Ipsos-Sopra Steria estimates, the age group with most abstentions was voters between 25 and 34 (46%).

Yasser Louati, a French political analyst, believes that voters abstain from voting mainly because they don’t have faith in politicians.

“We have millions of people living under the poverty line, COVID19 killed more than 150,000 people. We have institutions that are being discredited, people don’t believe in institutions, politicians are not trusted, journalists are not trusted,” he told Politics Today.

“Instead of addressing these questions and how we can make our institutions more legitimate, how we can address poverty, we have debates over Muslims. Such as, do Muslims belong here? Are Muslims like us?” he noted.

For Louati, the decision to vote is a difficult process because he believes it comes down to voting for the lesser of two evils. He asks, “Why do I always have to vote for the lesser evil? You are not bringing solutions. You are constantly asking us to choose between the bad and the evil.”

Another important reason of the high abstention is the fact that this election is considered to be moving further to the right. Even though Macron seems to be a centrist politician, his implementation of policies is no different than the far-right parties when it comes to Muslims. For example, his so-called Anti-separatism Bill that was introduced in 2021 led to nearly 30 mosques being shut down in less than a year.

With almost six million French Muslims, France has the largest Muslim population in western Europe. However, research indicates that due to discrimination, racial violence, and far-right politics against Muslims, many highly educated Muslims emigrate from France to secure freedom and job opportunities for themselves and their families.

Amal Benkerroum, a Muslim woman entrepreneur, who is thinking of leaving France, told us, “I don’t know if I will vote on Sunday. I don’t know who to vote for.” She added, “If Le Pen becomes the next president of France, I am going to leave France because that means the community that we are living in doesn’t want us and we are not welcome.”

With the second runoff only a week away, France is faced with two choices. However, most young people feel that neither Macron nor Le Pen can represent them. Four days after the first round, several hundred students took to the streets chanting “Neither Macron nor Le Pen!” Most of them voted for the hard-left leader Mélenchon, and they complain about not having a suitable candidate in the second round who represents them.

According to Ifop pollsters, Macron is expected to receive 51% of the votes and Le Pen 49% on April 24. However, abstentions may increase in the second round mostly due to the fact that the 2022 French election has been driven by fear rather than hope. Although Macron is calling on people to vote for him in order to block the far right, the gap is very narrow and it is the first time in French history that the far right is so close to winning.

Nisa Efendioglu is a journalist working at TRT Haber. Previously working as a diplomatic correspondent, she currently presents a news show related to world news every weekday. She holds two master degrees from the London School of Economics and Galatasaray University. Efendioglu speaks English and French and she conducts high-level interviews with world leaders and politicians and produces special news packages on different issues.