Muslims in France are struggling to decide which candidate to vote for in the election. 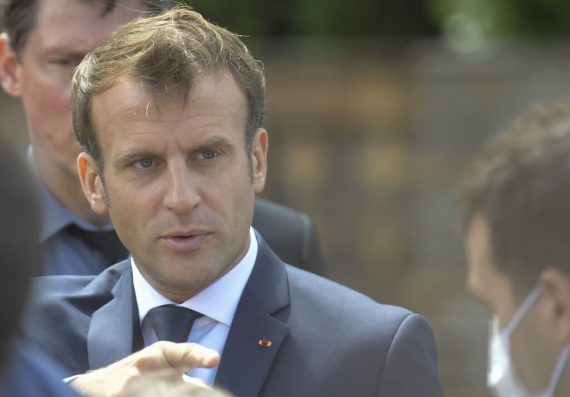 French President Emmanuel Macron accompanied by his wife (not seen) leave after voting for the second round of municipal elections today in Pas-de-Calais, France on June 28, 2020. Photo by Francois Pauletto, Anadolu Images

France will choose its new president in April of this year. Current president Emmanuel Macron has not yet announced his candidacy, but he is expected to announce it officially soon. There are around 40 candidates who will run for the election.

While far-right politicians in France have been already mobilized, Macron, who was elected in 2017 with great expectations, wants to be re-elected. No prediction for a future election is easy, and neither is predicting whether Macron will be elected again. To this end, we need to have a brief look at Macron’s four-year term in office.

Emmanuel Macron faced many challenges in domestic politics after he was elected in 2017. The yellow vests protests and the COVID-19 pandemic were the most important tests. In November 2018, civil protests broke out against the rising fuel prices and living costs. The police response was violent and used disproportionate force against civilians participating in the protests, leading to severe criticism of the Macron administration.

The Macron government did not prevent the excessive violence by the security forces, but on the contrary, made legal arrangements for the use of violence. The General Security Law emerged as a reaction to the protests and was approved in France’s National Assembly, empowering security forces and justifying the use of excessive force to defend and protect themselves.

Macron failed another test in the fight against the COVID19 pandemic. His administration couldn’t efficiently overcome the socio-economic problems that emerged due to the pandemic, reducing confidence in Macron’s leadership. As a result, La République En Marche! (LREM) founded by Macron suffered a great defeat in the municipal and regional elections that took place in 2020 and 2021, respectively. LREM fell short of expectations and lost big cities such as Lyon, Marseille, and Paris to the Greens and Socialists, respectively.

According to recent polls, Macron is expected to receive around 26 percent of the votes in the first round. Far-right politician Le Pen follows him with around 17 percent of the votes and the racist Zemmour, notorious for his hate speech targeting Muslims, ranks third with approximately 16 percent. Although Zemmour is not a strong candidate for now, he may ally with Le Pen against Macron in the second round.

Polls for the second round, expected to take place on April 24, estimate that Macron will be re-elected by receiving approximately 55 percent of the votes. This projection, which reflects similar results to the 2017 election, shows that the strongest candidate in the elections is still Macron despite all his failures. However, considering that the polls do not always give accurate results and the election is more than one month away, a completely different picture may emerge in April, contrary to the forecasts.

Islamophobic aspects of the candidates

The Islamophobic views of prominent candidates such as Macron, Le Pen, and Zemmour in the lead-up to the election point to a serious threat to Muslims in the country. In fact, the marginalization and securitization of Muslims in France since the September 11 terrorist attacks reveal that the French governments follow an institutionally Islamophobic stance.

The Islamophobic views of prominent candidates such as Macron, Le Pen, and Zemmour in the lead-up to the election point to a serious threat to Muslims in France.

More recently, Macron’s government has closed down 17 mosques with vague claims of violating security laws or not meeting the required safety standards, and has surveyed nearly 90 mosques. Moreover, the government pressured the French Council of the Muslim Faith (CFCM) to sign a charter of “Republican values” as a part of its so-called French Islam project.

With elections drawing near, the French government is looking for ways to appeal to far-right voters. For instance, on February 5, 2022, they officially introduced the Forum of Islam in France (FORIF) that took over from the CFCM. What’s controversial about this forum is that all its members will be handpicked by the government, evidently undermining the political representation of Muslims in the country.

As part of their far-right ideology Marine Le Pen and Eric Zemmour are quite notorious for holding both Islamophobic and anti-Semitic stances. Both oppose the presence of Islam and Muslims in France. More extreme than Le Pen, Zemmour calls for the assimilation of Muslims and demands that French Muslims renounce their faith.

Muslims in France are struggling to decide which candidate to vote for in the election. Whatever the outcome of the election is, difficult days lie ahead for French Muslims, which comprise around 10 percent of the population. The worst-case scenario is a far-right candidate coming to power. Then Muslims would face innumerable difficulties including facing more violent acts in the coming years.

How might the election results affect relations with Turkey?

It seems that two political/ideological factions stand out in the French presidential elections. The first is the relatively moderate line represented by Macron, and the other is the far-right line represented by Le Pen and Zemmour. If Macron is re-elected, as seems probable at the moment, the current tense atmosphere in Turkish-French relations may continue. More specifically the tensions in Libya, Syria, and the Eastern Mediterranean, where the concerned parties are in direct confrontation, are likely to remain.

The second scenario would be catastrophic. If the far right comes to power in France, then, there would be a paradigm shift in France’s relations with Turkey. Turkish-French relations cannot remain healthy under a Turkophobic and Islamophobic government. In such a scenario, ideological motives would dominate the relationship and the bilateral relations may come to a breaking point. Therefore, Macron’s victory in the presidential election seems the more preferable option for Turkey.