Statements made by politicians and similar moves in order to gain potential votes from far-right, anti-Islamic and populist circles just polarize the country while excluding Muslims in Germany. 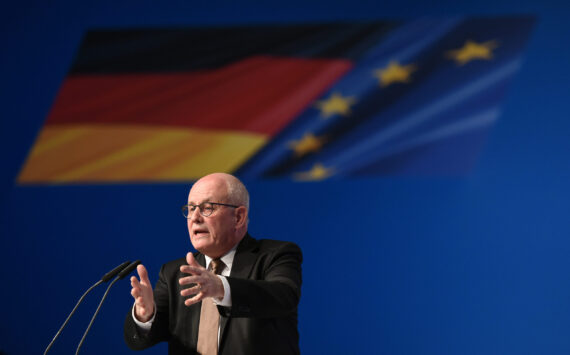 The Chairman of the CDU/CSU parliamentary group, Volker Kauder speaks during the 29th annual congress of the Christian Democrats (CDU) on December 7, 2016 in Essen, Germany. Getty Images

It is not so long ago that Germany’s Federal Minister of the Interior stated that Islam does not belong to Germany. In addition, his party, the CSU’s Bavarian leader Markus Söder recently announced that crosses must be hung in all Bavarian state’s government buildings, stating that the move is a “commitment to Bavarian identity and culture.” Besides the fact that his first act as the new leader of the Bavarian government is most probably violating the constitution’s neutrality, and on the other hand, most of the four million Muslims in Germany would actually have no problem with Söder’s act of emphasizing Christianity, there are also some other statements by politicians which are also quite disputable.

For instance, a leading federal politician from Chancellor Merkel’s ruling CDU party, Volker Kauder, made a speech on 27 April about the freedom of religion at Germany’s federal parliament, the Bundestag. Kauder said something very strange which has to be addressed in detail. In his speech Kauder used these words: “As we –of course– give Muslims the possibility –and we are supporting this– to build their mosque and to worship in it, as part of freedom of religion; we demand that the Christians can also build their small churches in Turkey, my dear ladies and gentlemen.”

Before addressing this statement, it has to be mentioned that Kauder is heading the strongest parliamentary group in the German Bundestagand his party CDU is a member of the coalition government ruling the country. Generally, people would thus expect that a high-profile and influential politician from such a central party in one of the wealthiest countries in the world prefer legitimate and reasonable words. However, this did not happen. Let me explain why.

Kauder’s statement is very problematic from some basic points.

First, he said that “we give Muslims the opportunity…” But, whom does he mean with “we” in a country that respects the rule of law and whose constitution expects religious neutrality? If he explicitly names some people as “we,” he consequently excludes others. Does he mean “we” Germany and all its people as a whole? Or, just ethnic Germans who are Christians? Or, also Germans who are Germans due to their German citizenship? Or, just Christians independent of their nationality or ethnic origin, or, just the CDU or CSU?

Furthermore, Kauder stressed that they (“we”) give “Muslims” the possibility to build mosques in Germany. But who are these “Muslims?” And do they have a special status according to the German constitution or do they need special treatment? Does Article 4 of the German constitution (freedom of faith, conscience, and creed) not protect Muslim rights as much as it does Christian rights? Do Muslims need a tolerance range due to a constitutional lack? Or, does Kauder just mean the (approximately 3 million) Turkish Muslim population who are living in Germany or the 1 million Syrian refugees or even other German Muslim groups with a background from Morocco, Lebanon, Bosnia, Iran, Iraq etc. Or, Muslims who are actually ethnic Germans?

It’s also very absurd and not acceptable from a democratic point of view as to why Kauder requests something in the form of a precondition and response to freedom of religion in Germany. Does Germany’s constitution allow people who are not Christians or Germans to practice their religions only if the country of their origin, where they or their parents once upon a time came from, deliver the same rights? For instance, in the form of allowing to build churches and to worship in them? In the context of Turkey, his arguments are not true because churches do exist in Turkey along with Christian groups and communities. However, the question arises whether Kauder would go so far to prohibit building mosques in Germany if Muslim-dominated countries would do the same against Christians? If yes, how will he legitimize this kind of antidemocratic and unconstitutional request? As predicted, this kind of a premise has nothing to do with democratic mentality.

Thus, it must be stated that Muslims in Germany, who possess German citizenship or not, have also one of the indisputable basic rights, the freedom of religion, according to which the “undisturbed practice of religion” is guaranteed in Germany – without any precondition. Unfortunately, statements made by politicians and similar moves in order to gain potential votes from far-right, anti-Islamic and populist circles just polarize the country while excluding Muslims in Germany. Mr. Kauder can of course stand up for the demands of Christians building churches all over the world. However, he does not have the right to instrumentalize Muslims living in Germany who are under the protection of the German constitution.