Associating a terror group with Islam is scandalous. Would have DAESH been called a “humanist terror group” had the group defined itself as a humanist organization fighting for human rights? Asking Muslims to be less visible in the public by departing from this shows the absurdity of the situation. 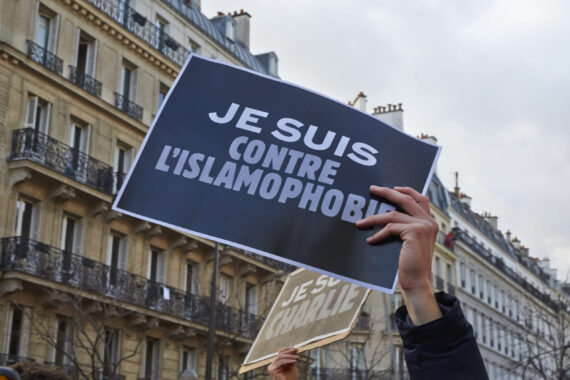 'Je suis Charlie' demonstration in Paris after the killings by islamists. Placard against islamophobia. Getty Images

These captions about Islam and Muslims are from the front covers of two French weeklies, namely Le Point and L’express – published only within a year. If you still don’t get enough dose of Islamophobia after reading these two, (because weekly magazines have higher circulations than daily newspapers in France), take a look at the other weekly or monthly magazines, daily newspapers and TV programs.

Consider also the remarks of the prominent intellectuals in the country, such as Alain Finkelkraut, Eric Zemmur, Robert Badinter, Plantu, Houllebecq and others… Or, listen to the politicians other than Marine Le Pen, including the representatives of right, left, and center groups. It is highly possible to find a whole slew of phobic hints between their lines.

After acquiring Islamophobic tendencies, it is time to get bolder. As Elizabeth Badinter argues, “one should not be afraid of being called Islamophobic and condemned for that.” After all these manipulations, it’s time to develop your own ideas, voice your own apprehensions and anxiety, make judgements without hesitation, and fabricate new fears.

In such a country, a report entitled “The Islamist Factory” was released instead of something called “The Islamophobic Factory.” Although Hakim El Karoui, a Franco-Tunisian consultant, presented in the liberal Montaigne Institute his third report under this title, the 617-page report focuses on “Islam.” His aim is to conduct a study on how to form a “French Islam” upon the demand of his old colleague President Emmanuel Macron from their years in Rothschilds’, and organize and finance the religion of Islam in a way to break the effect of Islamism in France.

When it comes to the report and Karoui’s approach, the interviews he formerly gave provide some clues. In one of his interviews, Karoui is asked: “60 percent of the Muslims believe that wearing headscarf should be allowed in schools. Isn’t this a failure?” And he answers: “No, everyone has respected and conformed to the laws. But as Marcel Gauchet says, there is a phenomenon of individualization in social relations. They regard the headscarf as a symbol of belonging, which is actually a success of the Islamists, just like the issue of halal meat. In France, 40 percent of the Muslims think that eating halal meat is among the five pillars of Islam, which is absolutely wrong.”

Although the report emphasizes that its primary purpose is to avert radicalization through the power that Islamic doctrines like Wahhabism and Salafism enjoy on social media and financial support of a number of countries, the general tone of the report suggests much more. The leading questions in the case study published in the report include the issues such as the headscarf, halal meat, virginity, obedience to men and frequency of mosque visits. It also sketches a crude outline of the view of Muslims on world politics and anti-Semitism and the countries that they are antagonistic to.

Everything presented in the report is intertwined together with a plain logic. In another interview, Karoui says: “25 percent of the Muslims in the country are against the Republican values,” whereas the newspaper interpreted this as a “shock.” While referring to the Republican values, Karoui surely means secularism a la French. Accordingly, the secularism experience of France shows that what is actually desired is an “invisible and indiscernible Islam.” Former Interior Minister Jean Pierre Chenevement, who was elected as the chair of a foundation that was established to invent a French-style Islam two years ago, summed up the situation as follows: “Muslims should freely live their faith but since we are going through hard times, they should not be very visible in public spaces.”

Associating a terror group with Islam is scandalous. Would have DAESH been called a “humanist terror group” had the group defined itself as a humanist organization fighting for human rights? Asking Muslims to be less visible in the public by departing from this shows the absurdity of the situation. As for the report, there are undoubtedly serious differences between a Muslim performing the rules of Islam and a religious belief developed by the hybrid identities in-between the West and Islam amid the dynamics and problems of the modern world that is completely disconnected from traditions.

But when looked at the Muslims through the perspective of Republican values and secularism, a mindset that does not differentiate these two or three is prevalent, which is called Islamophobia. Since this factory is operating full-time, it is not a surprise that some other doctrines have been emerging simultaneously. These two are fueled by the same engine, both the secularist world and Salafi and Wahhabi doctrines are in a battle against traditional Islam.