France witnessed a creeping cultural campaign in the shadow of security concerns that holds back any kind of criticism. It is McCarthyism with French characteristics, and it is always advanced in the name of the Republic and its values. 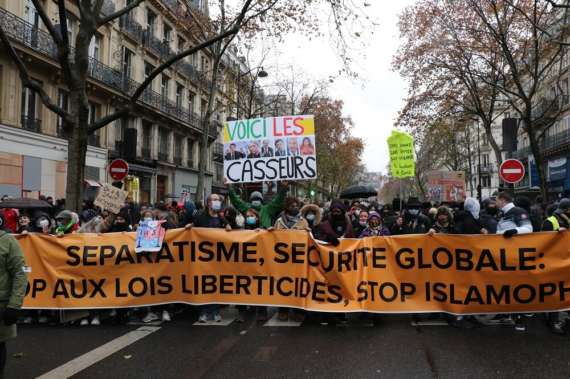 According to the official French narrative, the “values ​​of the Republic” express the citizens’ affiliation to the country and their perception of themselves. Therefore, the concept of the nation is inherent in the concept of the “Republic.”

The French concept of the “Republic” is not limited to the abstract political system and its institutions; it also evokes historical moments and symbols dating back to the French Revolution and with it comes a package of values, meanings, ideas, charters, and legislation.

On this basis, specific values and intellectual commitments are presented as conditional to the French identity, defining whether one belongs to the “French nation” or is excluded from French society. Currently, French Muslims are subjected to this trial.

In a speech on October 2, 2020, President Emmanuel Macron coined the term “Islamic separatism” by stating that the Muslim suburbs, which he described as “ghettos,” have been witnessing a tendency to secede from the Republic. He then asked the representatives of Muslim institutions in France, when he summoned them on November 18, to illustrate their commitment to a “charter of republican values” and sign it within a few days. He stipulated the inclusion of specific contents in this charter, one of which was to strictly define Islam as a belief and not a political movement.

It should be noted that Macron exclusively asked the Muslim citizens of France to declare this special loyalty to the Republic by resorting to drawing up this new charter — as if the general charters and legal texts do not suffice or make an exception for Muslims citizens, like for instance the Charte de laïcité, which has been present in every classroom for years.

Read: Islamophobia Is Now a Source of Pride in France

The campaign against “separatism” does not target mosques alone; it also pursues civil society organizations such as the Collective Against Islamophobia in France (CCIF), an organization that works against racism and discrimination.

In the context of the 2013 debate revolving around Islam and Muslims, warnings were raised about secularism being “under threat” and that “the values ​​of the Republic are in danger.”

This resulted in the “secularism charter” being issued for schools. However, the political values, which emphasize the strict separation of religion and politics, did not prevent senior French politicians from dictating a specific direction of religious practice and Muslim presence, enforced through a Council of Imams that would allow control, for example, of the sites of the imamah and the rhetoric in mosques.

The above official orders are accompanied by the cultural examination and placement of French Muslims, their mosques, and institutions under the political microscope, and successive announcements of the closure of dozens of their institutions and mosques.

The campaign against “separatism” does not target mosques alone; it also pursues civil society organizations such as the Collective Against Islamophobia in France (CCIF), an organization that works against racism and discrimination.

These developments came in the context of a wave of heightened populism that has been mounting in France since the end of the summer of 2020. On September 17, for instance, deputies boycotted a parliament meeting attended by Maryam Pougetoux, the president of the Students’ Union at the Paris-Sorbonne University (UNEF), because she is a Muslim who wears a headscarf, which allegedly contradicts the stipulated “values ​​of the Republic.”

This coincided with the start of the trial against those accused of carrying out the Charlie Hebdo attack, and the satirical newspaper’s continued publication of comics that are insulting to Muslims and their beliefs.

Following this, a number of bloody assaults took place, including the brutal murder of a French teacher and the killings in Notre-Dame de Nice by a homeless man who had just entered the country a few days prior to the attack.

France witnessed an escalation in critical attitudes towards Muslims throughout the months of autumn, during which social media, and political and cultural platforms increased speculations around the Muslim community and the linked political discourse frequently reached the point of obsession.

In the course of this quasi-McCarthyist campaign, Interior Minister Gérald Darmanin emerged at the forefront of the French administration’s hawks and made a name for himself internationally. The Spanish newspaper El País in its November 23 issue described him as “Macron’s naughty companion” (el poli malo de Macron).

In an infamous interview with French channel BFM on October 20, Darmanin expressed the fact that the existence of halal products in French supermarkets infuriates him. President Macron himself similarly criticized halal-labeled food in school canteens in his speech on October 2, labeling it as “religious lists.”

Some observers of these concerning developments began to notice the emergence of institutionalized divisions in the country driven by this obsessive discourse. Prominent political sociologist Jean-François Bayart, to name an example, monitors the emerging “Republican McCarthyism” in France and warns of manifestations of “State Islamophobia” (Le Monde, November 1).

Yet, these warnings seemed to fall on deaf ears with the advancing role of private television giving preference to selected spokespeople within this populist debate. The latter are notorious for invoking “the values ​​of the Republic” before they proceed with an escalation of hate speech and discriminatory language targeting French Muslims, who represent the largest Muslim minority in Europe.

The response to the developments regarding the state security in France during the past few years came in the form of declaring a state of emergency, coupled with the expansion of the influence of political power and the Ministry of the Interior.

Parallel to this, the term “values of the Republic” left a hard-wearing cultural imprint. Gradually, the proposals for community monitoring emerged under the pretense of monitoring early signs of extremism and what the state deems as “suspicious” among Muslim neighbors or schoolchildren in particular, paving the way for a shift in the conversation to combatting so-called Islamic separatism.

One of the possible interpretations of “separatism” in this context includes some aspects of cultural diversity and the right to difference.

However, this concept of “separatism” is hazy and loose, raising the fear that it could be abused by politicians and the executive bodies in a country where the extreme right is aggressively rising and trying to sweep the elections.

One of the possible interpretations of “separatism” in this context includes some aspects of cultural diversity and the right to difference. In any case, it is clear that some of the leading French elites are used to showing discontent with manifestations of diversity in the public sphere. Even the former French Minister of the Interior Gerard Collomb described the appearance of Pougetoux on a French television screen on May 19, 2018 as a “shocking matter” due to her being “different from French society.”

There are clear contradictions emerging from this cultural campaign of the new ruling class in France that mixes political and electoral interests and politically aligned business leaders and entrepreneurs.

The most evident example is that the same government that speaks of freedom is now seeking to restrict other freedoms and expand the powers of the police and security forces, causing nationwide fear and protest.

The brutal attack on the black music producer Michel Zecler on November 21 was a shocking point in this development, since the recorded incident brought to mind the persistent complaints of suburban residents in regard to police brutality and the suspected racist motives behind it.

Freedom of expression as a public value has increasingly been stressed during the cultural escalation in France, especially since the armed attack on the Charlie Hebdo office in 2015. At the time, President François Hollande rallied with world leaders in a march that was also joined by French Muslims and representatives of their institutions despite the fact that they were being targeted by the humiliating comics in the satirical newspaper.

These comics together with the slogan “Je suis Charlie” turned into a cultural expression linked to the values ​​of the Republic. However, the unprecedented emphasis on freedom of expression has paradoxically been accompanied by increasing insults and contempt directed at Muslims and their religion, with officials not expressing the slightest discomfort about these offenses.

Invoking freedom of expression in this selective manner has placed the French official discourse in a crisis of credibility. The French leadership ignores the reference to this freedom in other situations and does not welcome content that does not suit its taste – in fact, it even resorts to measures to curb it.

Marco Perolini, a discrimination and racism researcher at Amnesty International, wrote, “The French government is not the champion of free speech that it likes to think it is.”

Among the many examples that Perolini cites in a detailed article is the instance of a French court that convicted two men in 2019 of “contempt” after they burned an effigy of President Macron during a peaceful demonstration.

In his article, Perolini points to truths that even members of the French elites do not dare reveal under the existing cultural pressure. He writes, “The right to freedom of expression also protects the ability to criticize the choice to depict religions in ways that may be perceived as stereotypical or offensive. Being opposed to the cartoons does not make one a ‘separatist’, a bigot or an ‘Islamist’.”

What France witnessed in the fall of 2020 is not societal dialogue. It also does not appear to be a round of debate by virtue of the almost complete absence of a plurality of opinions. It is more like a creeping cultural campaign in the shadow of security concerns that holds back any kind of criticism, be it mild and timid or from outside of France. It is McCarthyism with French characteristics, and it is always advanced in the name of the Republic and its values.

Hossam Shaker is a researcher and author, consultant in media, public relations, and mass communication for a number of organisations in Europe, and he resides in Vienna. He has an interest in analysis of European and international affairs, as well as social and media issues.