The Politics of Sighting the Crescent Moon in the Muslim World

For the first time in history, Muslims have found themselves in a node of modernization, transnational sectarian networks, and state policies. 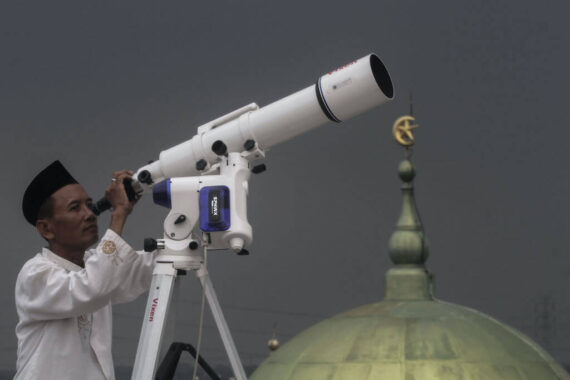 An officer from the Ministry of Religion is monitoring the Rukyatul Hilal or new moon position to determine the beginning of Ramadan in Jakarta, Indonesia on May 5 2019. Photo by Eko Siswono Toyudho, Anadolu Images

Fasting during Ramadan is one of the most important expressions of faith by followers of Islam. From sunrise to sunset, Muslims abstain from eating, drinking, and other specified human activities. Many Muslims collectively spend time during the nights and days of Ramadan performing acts of worship and, above all, reciting the Quran and repeating remembrances of God, Allah.

One of the most challenging issues in relation to Ramadan is determining its beginning and end based on the crescent moon. Since the beginning of the month is bound to sighting the moon in the lunar calendar, the exact declaration of the new month is difficult. Therefore, for many years, announcing the sighting of the crescent moon has been a challenging task. Many Muslim scholars and jurists believe that the beginning and end of Ramadan can only be determined by spotting the moon with the naked eye and that using modern tools to calculate the appearance of the crescent is not religiously valid.

However, especially in recent decades, others have emphasized the calculability of the lunar month. As a result, Muslims and Muslim-majority states are divided over the start of the month. Although it is the same as any month of the lunar calendar, the beginning and end of Ramadan is important as it determines the start and end of the month of fasting.

Declaring the sighting of the crescent moon is not the sole issue regarding Ramadan that is disputed among Muslims. Based on the sect and school of thought to which they belong, Muslim jurists also differ on various aspects of fasting during Ramadan.  These include the exact time of the beginning and end of fasting, what invalidates fasting, and the fitrah payment, a charity given to the poor at the end of Ramadan.

Among the disputed points is the challenging issue of the end of Ramadan. The day and usually its following days are among the most important feasts in most Islamic countries and Muslims living in non-Islamic countries. In recent decades and with the bureaucratization of urban life in the world, the performance of the rituals of the feast of Ramadan mostly depend on the official calendars that are enforced by the states.

In recent decades and with the bureaucratization of urban life in the world, the performance of the rituals of the feast of Ramadan mostly depend on the official calendars that are enforced by the states.

The lives of Muslims today, like those of worshippers of other religions, are shaped by a network of physical/biological, sacred/religious, and secular/political times and calendars. Muslims living in Islamic and non-Islamic countries and working in modern institutions have difficulty matching the biological time of fasting with their working hours during Ramadan. While Muslims tried to regulate their work with fasting in premodern societies, now many Muslims are forced to adapt their fasting to modern work. This unconformity has caused some Muslims to complain about this issue as their efficiency in the labor market decreases during Ramadan: they cannot compete and reach their full potential at work. On the other hand, the need to work affects their ability to worship as they would like.

Apart from having to match the biological time of fasting with the demands of the labor market, the intersection of religious time and secular/political time has also caused problems. Almost all Muslim-majority countries designate certain days to the holiday of Eid al-Fitr. This closure for administrative and economic reasons has a long history and is determined by the states long ago. It is a challenging task due to the difficulties of determining the exact time of the end of Ramadan. This is made more complicated by the fact that in some Islamic countries Muslims belong to different sects which may not declare the same day as Eid al-Fitr.

Political rivalries between the Muslim countries can be added to the sectarian sources of the dispute. Saudi Arabia, a country that hosts Mecca and Medina, the holiest places of Islam, and the center of Wahhabism, one of the most powerful sects of Islam, has always had symbolic power among Muslims. At the same time, Iran because of its Shiite majority and religious rule, Egypt because of Al-Azhar University and its long-standing influence on global Islam, and Turkey because of its legacy as one of the largest Muslim empires, all have social capital and symbolic legitimacy among Muslims.

Although none of these countries’ statesmen and officials – nor those of other countries – relate the determination of the start and end of Ramadan to identity and legitimacy competitions in the Islamic world, it is generally accepted by observers that the declaration of the first and last day of the month in each of these countries and in the countries that are under their influence is related to their competition over supremacy of the Muslim world. 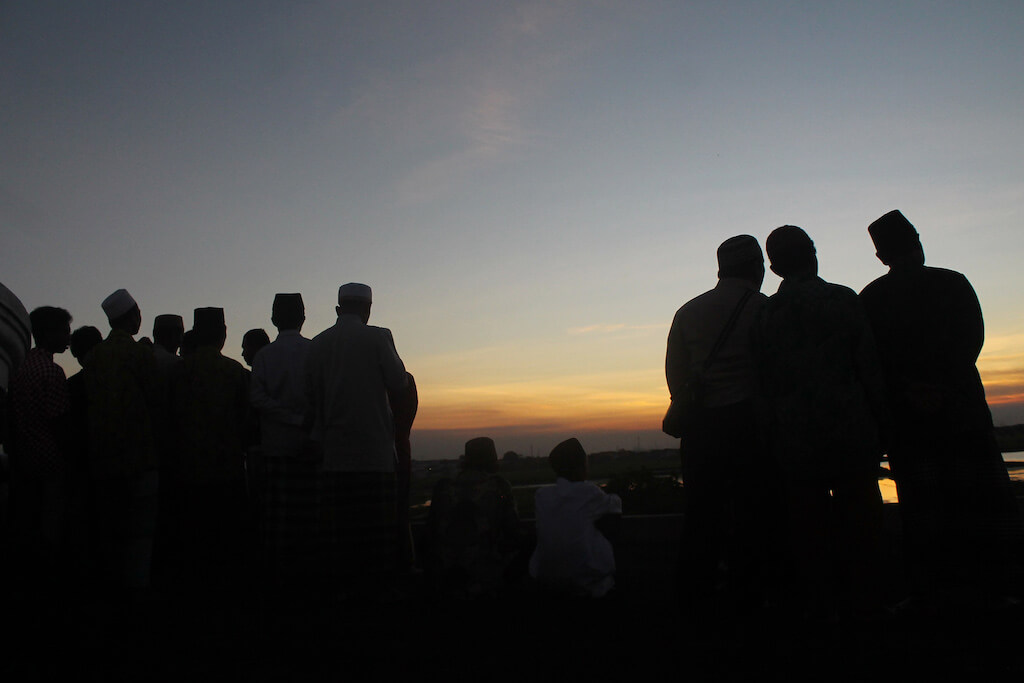 Indonesian Muslims hold a Rukyatul Hilal to see the new crescent moon that determines the start of Ramadan Holy Month on Tuesday, June 16, 2015, in Surabaya, Eastern Java, Indonesia. The country is preparing to mark the Islamic holy month of Ramadan. Photo by Suryanto. Anadolu Agency.

Due to this fact, we see that sometimes countries that are located, for the most part, on the same meridian (line of longitude), for instance Iran and Saudi Arabia, or different parts of a country (for example, Iraqi Kurdistan and the Arab regions of Iraq) declare different first and last days of Ramadan. There was also the interesting case of Muammar Gaddafi, the former Libyan leader, who always announced the Feast of Ramadan on a different day that that announced by Saudi Arabian authorities.

In Iran, the first and last days of Ramadan are declared by the Supreme Leader. The Iranian state propagates that the declaration is binding for all citizens regardless of any school of thought within the Shiism they follow.

Iranian Shiite religious scholars are an example. In Iran, the first and last days of Ramadan are declared by the Supreme Leader. The Iranian state propagates that the declaration is binding for all citizens regardless of any school of thought within the Shiism they follow. However, followers of other Shiite clerics, who consistently challenge the religious legitimacy of the Iranian state, provide their understanding of the start and end of Ramadan based on reports of the moon’s appearance received by their witnesses. Their followers do not attend the state-run feast prayers and prefer to join those held by their beloved clerics. These differences in announcing the end of Ramadan and of congregational prayers contest the state’s religious authority and legitimacy.

Transforming a local issue into a state one

Until very recently, the majority of Muslims lived in rural areas. The “local” determined many religious issues and believers solved their religious problems by referring to the “nearest” sources of authority and reference embodied in the local imam, saint, or other “men of Allah.” They generally did not know what others thought and did, even in nearby neighborhoods. Gradually and by becoming part of modern nation states, believers became connected to centers of political power. They had to adapt themselves to the state calendar. On the other hand, technological developments, such as the telephone, radio, television, and recently the internet, contributed to being notified of state decisions regarding the lunar calendar.

Muslim communities in countries where Islam is not the majority religion deal with the issue of the exact dates of Ramadan in a variety of ways. Some trust calendars prepared by international Muslim organizations, others seek the opinion of their local religious institutions, and others yet refer to the announcements of their country of origin.

In conclusion, spotting the new moon is something that any Muslim can do. However, moving away from traditions of moon sighting, which are still prevalent among Muslims in rural areas, has caused a significant dependence on state-run media. Nowadays, most Muslims do not know how and when the new moon can be sighted. Living in air- and light-polluted urban areas makes it generally impossible for millions of Muslims to spot the moon.

On the other hand, Muslims are deeply involved in state calendars and cannot easily swim against the current. Muslim states have other expediencies and interests in religious matters as well; they consider international necessities, regional realities, and their denominational structures.

A good example is Iraq. Sunnis generally obey Saudi Arabia in announcing the Feast of Ramadan, Arab Shiites generally follow their high-ranking Iraqi clerics, and a minority listens to the Iranian Supreme Leader. The Iraqi government declares the holiday to include the days heralded by the followers of both denominations.

In a nutshell, for the first time in history, Muslims have found themselves in a node of modernization, transnational sectarian networks, and state policies. They are obliged to obey state calendars, whether they live in a Muslim country or not. At the same time, they can expand their individuality by seeking information about the beginning and end of Ramadan from non-state sources via modern technologies. This has added to the rising crisis of authority among traditional Islamic actors in the contemporary world.

As a result, the fact that one cannot known with certainty when Muslims who live kilometers away from one another will celebrate the Feast of Ramadan and being obliged to live according to predetermined state calendars have led to unprecedented confusion and disputes among Muslims and Muslim-majority states. This phenomenon is another example of the Muslim world’s rising, new social, cultural, and symbolic mobility and crisis. 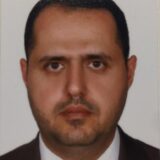 Peyman Eshaghi is a Ph.D. student of Islamic Studies at the Berlin Graduate School of Muslim Cultures and Societies (BGSMCS), Free University of Berlin, Germany. Before that, he studied at the University of Chicago, University of Ankara, and the University of Tehran in anthropology and sociology of religion. His main areas of research are hajj and pilgrimage in Islam and Iran-Ottoman relationship.