What is happening in Europe today with the rise of right-wing parties is a generational change that reflects a shift from the far-right of postwar Europe. 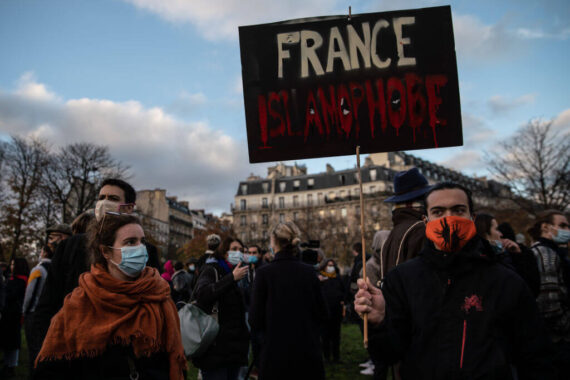 A protestor holds a placard that reads 'France Islamophobe' during a demonstration against the French government's global security bill and restrictions that target Muslim communities. Photo by Abdulmonam Eassa, Getty Images

The far-right in France has best understood contemporary national and international fluctuations, which lead to anti-Parliamentarism, anti-Semitism, or nationalism, and promotes hatred of Muslims and other minority groups in society. Since Vichy and the collaboration of French authorities with the Nazi regime, the far right has been oscillating between anti-Semitism, latent but never asserted as a political program, and anti-Arab racism, as clearly demonstrated by political scientists.

For nearly 40 years, the far-right occupied the French political scene, crystallizing under the name of the National Front. Created by Jean-Marie Le Pen, the National Front exploited the nostalgia of French Algeria, the petty bourgeoisie of the Poujadist movement, and the fears of a population hit by deindustrialization.

However, the attachment of the French youth to the far-right is no longer limited to the National Front, which turned into the Rassemblement National or the National Rally. Thanks to the communication networks and the use of social media, they can now form various small groups. Ideas of right-wing politics are becoming more mainstream and widely disseminated in the French public.

A new generation of far-right in France?

The political inclination towards the far right is traceable throughout Europe, and France is no exception. While European far-right parties present candidates aged between 20 and 30 years in order to attract young voters, in France the rising star of the National Rally is Jordan Bardella, a 24-year-old politician, a well-behaved and clean-cut young man, elected from Seine Saint Denis, one of the poorest and most ethnically mixed districts in France.

Muslims stage a solidarity demonstration for victims of the Paris Charlie Hebdo attack after the performed Friday prayers at Paris Grand Mosque in Paris, France on January 09, 2015. Photo by Onur Usta, Anadolu Images

What is happening today in Europe with the rise of right-wing parties is a generational change that reflects a significant shift from the far-right of postwar Europe. At that time, the far-right was identified with the Nazi genocides.

This movement was marginalized and finally defeated by a unified Europe. Today, right-wing candidates who address young people use an anti-Muslim discourse, which is sometimes, not necessarily always, accompanied by a pro-Christian vision of Europe.

For the young French who support right-wing parties, the fear of the European population being culturally and ethnically replaced by minorities is at the heart of their concerns.

Although fanciful, the fear of the Great Replacement has successfully gained ground in France. Theorized by the extreme right-wing writer and theorist Renaud Camus, the Great Replacement is a racist and xenophobic conspiracy theory according to which there is a deliberate process of substitution of the French and European population by a non-European population, primarily from Black Africa and the Maghreb.

This replacement implies a change of civilization and the process is claimed to be supported by the European political, intellectual, and media elite for ideological or economic reasons.

For the young French who support right-wing parties, the fear of the European population being culturally and ethnically replaced by minorities is at the heart of their concerns.

Looking at how the youth voted in the first round of the French presidential elections in 2017, Marine Le Pen won 21% of votes of people aged 18-24. She was clearly preceded by the far-left candidate Jean-Luc Mélenchon who won 30% of the votes, surpassing Macron who won 18% of the votes. In the 25-34 age group, Le Pen won 24% of the votes, like Mélenchon, but behind Macron with a percentage of 28%. In the second round, in the 18-24 age group, 66% voted for Emmanuel Macron and 34% voted for Marine le Pen, the candidate of En Marche!

This is a generation less marked by history, by successive wars, be it the Second World War or the War of Algeria.

The second reason is their support for “the ideas and solutions on immigration and integration that this party proposes.” The third reason is the impression that the “NF is the only party that cares about people’s problems. “This belief is held by +/- 17% of the general French population.

Outside the National Front

The takeover of the National Front by Marine Le Pen changed the party’s vision. She has never ceased to hold a narrow line and to hold on to a legacy while marking a distance with the sulfurous phrases and attitudes of her father Jean-Marie Le Pen. The party was renamed “Rassemblement National,” a way perhaps of betting on what unites the nation rather than what divides it.

A quest for respectability that has, in an almost mechanical way, shifted the lines. The ideological line of the National Rally officially is based on a Eurosceptic and anti-migration stance.

Read: Islamophobia Is Now a Source of Pride in France

The National Rally, in spite of the young Bardella factor, has remained a party of the elderly. The white hair of its members and sympathizers strike any observer who watches the party’s meetings. In addition, some criticized the leadership of Marine le Pen for causing the party to lose its dynamics through institutionalization and also of expelling most of its far-rightist members.

A “gentrification” is taking place, a weakening of the marginal ideas, and turning the National Rally into a party positioned in the right of the right – but not any longer in the extreme right. A term that the heiress Le Pen vigorously recuses.

In France, however, the extreme right now exceeds the National Rally alone and is embodied in various small groups. Religious groups intervene in social debates (freedom of expression in the arts, gay marriage, etc.) Civitas, also known as France Jeunesse Civitas or Institut Civitas, is a French social and political movement that defines itself as a “traditionalist Catholic lobby,” a movement “committed to the establishment of the Social Royalty of Christ in nations and among peoples in general, in France and among the French in particular.”

The movement that attracts the most attention is undoubtedly the Identitarians (Génération identitaire). This movement is characterized by its mastery of social networks, its marketing capacity – activists wear blue jackets with distinct logos – and its symbolic acts. For example, when they rally against police violence and “anti-white racism” in the Republic Square of Paris, they opened a huge banner from the roofs of houses facing the square, or when they organize “deport to the border” protests against migrants who try to cross the Italian-French border, or when they interrupt distributions of hot meals to migrants with the motto, “Ours before the others” (Les nôtres avant les autres).

The Identitarians use social networks in an interesting but efficient way. They recruit followers via online games like Fortnite, or war games, which are filled with racist conversations and conspiracy theories such as the Great Replacement. According to this conspiracy theory, people of African origin will replace the original “French” population.

This fear is often expressed in cinema, which sometimes tells us more than sociological surveys. Zombie films, such as World War Z, describe the destruction of the civilized world by enslaved hordes.

Through “raids” and “astroturfing,” the Identitarians use social networks to “lynch” a person or a community, and adeptly utilize trendy Twitter hashtags. This new, far right-aligned generation is waging “a war of influence and culture.”

The new far-right movement also worries the intelligence services. In June 2018, the newspaper Mediapart published an article and shared the results of an investigation conducted between October 2017 and June 2018.

About 50 of the individuals monitored by the French intelligence services are believed to be active or retired security officials, whether military, gendarme, or police.

Muslims stage a solidarity demonstration for victims of the Paris Charlie Hebdo attack after the performed Friday prayers at Paris Grand Mosque in Paris, France on January 09, 2015. Photo by Onur Usta, Anadolu Images

The former head of the French intelligence services, Patrick Calvar, expressed his concern about the possible role of these far-right groups. At a hearing held within the framework of the parliamentary commission of inquiry into the attacks of 2015, the then head of the DGSI (General Directorate for Internal Security) – La Direction générale de la sécurité intérieure said that he fears a confrontation between “the ultra-right and the Muslim world,” a probability that seems “inevitable” to him.

According to Calvar, “a fundamental movement is leading to the radicalization of society” in France and at the same time Europe is “in a great danger.” He stated, “That’s what worries me when I talk to all my European colleagues: we will have to, at some point, free up resources to deal with other extremist groups because confrontation is inevitable.” Calvar added, “You will have a confrontation between the ultra-right and the Muslim world – not the Islamists but the Muslim world.”

In the 1980s, the far right accused immigrants of “stealing” the work of French workers. In the 1990s, security issues structured the public debate. Henceforth, secularism, Islam, and its alleged incompatibility with the values of the Republic became the issues that fracture French society.

Meanwhile, these are no longer exclusively the concerns of the National Front. Even President Macron could speak of a “cultural insecurity” (a softer version of the Great Replacement) and some of his ministers take up ideas of the far right in France such as the vague notion of “Islamo-leftism” (to qualify an alleged alliance between Islamists and the extreme left). The far-right might not have won the electoral battle yet, but it seems to have won the battle of ideas.

Hassina Mechaï is a French-Algerian journalist based in Paris. Her areas of interest include world governance, civil society, public opinion, media and cultural soft power, the Middle East and Africa. She has worked for various French, British, African and Arab media outlets.

Also Read
French Islam: How France and the UAE Partners to Create a State Approved Religion