Further sanctions on the KRG

Iraq Planning Ministry spokesman Abdul Zohra al-Hendawi stated that “The ministry’s economic committee has decided that, from now on, only Iraq’s Baghdad and Najaf airports will be used for the import of gold and other precious metals.” 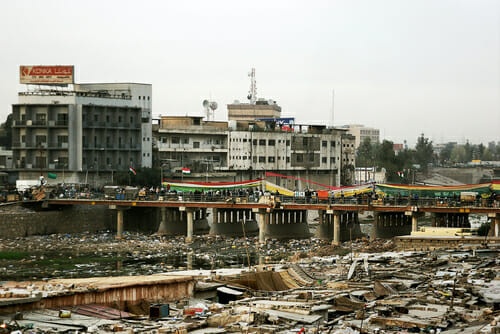 Following the Kurdish independence referendum which took place on September 25, where residents in KRG-controlled areas were asked whether they wanted to separate from Baghdad, tensions have escalated between Erbil and the central Iraqi administration.

While the results of the referendum have been announced as 93 percent in favor, the Iraqi administration have repeatedly underlined that they do not recognize the result as it is an infringement on the Iraqi Constitution.

In addition to the central Iraqi administration, Turkey, Iran and the US have openly opposed the referendum, calling for the territorial integrity of Iraq.

In most recent developments, Prime Minister al-Abadi emphasized that “The central government is solely authorized to provide security in disputed areas [of Iraq].”

While according to Iraq’s 2005 Constitution, Kurdish Peshmerga forces are answerable to the central government in Baghdad, on the ground they take their orders from the Kurdistan Regional Government.

In regards to this, Al-Abadi said “I urge Peshmerga forces deployed in these areas to refrain from fighting federal government forces.”

Gold and oil: economic limits on the KRG

Increasing political and economic sanctions on the KRG following the independence vote, on Tuesday Iraqi authorities banned the import of gold and other precious metals through airports in the northern region.

Iraq Planning Ministry spokesman Abdul Zohra al-Hendawi stated that “The ministry’s economic committee has decided that, from now on, only Iraq’s Baghdad and Najaf airports will be used for the import of gold and other precious metals.”

He added that the decision was made in order to prevent the “illegal import” of gold into the country.

In addition, Turkey’s government is considering the decision they will take on whether to continue the KRG’s oil transfer through Turkey.

Speaking at the 8th Turkey Energy Summit, Energy Ministry Undersecretary Fatih Donmez stated that while no decision has yet been made, the issue is currently on the agenda and is being examined.

He asserted that “We will decide on our stance based on instructions from the [Turkish] government. As of today, there is no decision yet, although this does not mean that there will not be one.”

Oil is a main asset of the KRG, and the regional government has enjoyed close ties with Ankara by using a pipeline stretching from northern Iraq to the Turkish Mediterranean port of Ceyhan in order to export oil.

However, following the independence referendum relations between Turkey and the KRG have deteriorated.

Also Read
Will Oman Be Ready for a Post-Oil Future?