Adding Fuel to Fire: The Politics of Power Outages in Gaza

The continuing electricity crisis in Gaza means that it is only a matter of time before another Palestinian family dies in a fire caused by candles. 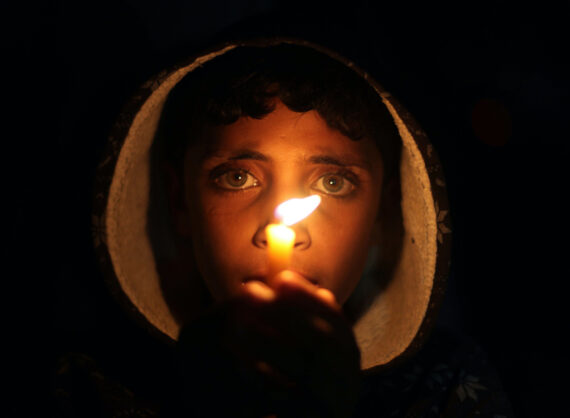 A Palestinian boy holds a candle during a protest against power cuts on November 3, 2013 in Gaza City. Gaza's lone power plant shut its generators on Friday due to a fuel shortage, a move that will likely increase already long blackout hours in the impoverished coastal territory. Photo by Ashraf Amra. Anadolu Agency.

In late June 2006, and soon after Palestinian factions captured the Israeli soldier Gilad Schalit in an attack against an Israeli military outpost southeast of Gaza, Israel started a destructive military operation in the coastal enclave to bring its solider back. One of the main infrastructures destroyed by Israel’s military operation in Gaza at the time was Gaza’s only power plant, located in the Al-Nuseirat refugee camp where I grew up.

Israel’s F-16s destroyed the power plant with a dozen missiles as my family gathered in the middle of the night to seek some sort of protection. I remember that night vividly as my mother brought us together while Israeli warplanes fired their missiles at the power plant a mile away from my family’s house. The house would shake and the screams of children at night would be heard even clearer, breaking the relative silence of the night which was violated by the sonic sounds of the Israeli warplanes.

In the same year, my youngest brother Omar was born. Today, he is 15 years old – the number of years of Israel’s siege on Gaza – and he has probably not enjoyed a single full day of electricity in his entire life in Gaza. The year 2006 saw the start of the power outages crisis in the coastal enclave, which has only got worse over the years. At the start of the crisis, electricity was cu off for four hours a day. As the demand for more electricity increased with Gaza’s population doubling by some 70,000 a year, and as fewer people were able to pay electricity bills due to the lack of jobs, the crisis has only got worse.

For years, Israel has prevented the entry of materials needed to fix the damaged power engines and the oil tanks destroyed by its warplanes. In many instances, Israel would link allowing shipments of manufactured fuel to run the Gaza Power Plant to ceasing hostilities. Meanwhile Gaza’s power plant, which produces 140 MW of Gaza’s total need of 450 MW, has rarely been able to function at full capacity. Gaza depends on other sources to cover the rest of its needs including two Egyptian and Israeli supply lines. In many instances, these two lines have gone down, and Israel has used the pretext of the security situation in the Gaza Strip to postpone fixing the Israeli supply line.

The electricity crisis has impacted all aspects of life in Gaza. From 2006 to this day, dozens of patients have passed away due to the lack of electricity in the intensive care units (ICUs).

As forest fires continue unabated in many parts of the world due to the recent heat wave, one can only imagine what this heat wave means for the people of Gaza. In a place like Gaza, where green areas are limited, and where thousands of people live in tin houses in ever-crowded refugee camps, the heat is even worse. The only place people can escape to is the Mediterranean Sea, much of which is polluted by untreated sewage water that is pumped into the sea because the only desalination treatment in the Gaza Stirp was also destroyed by Israel in 2008/9. 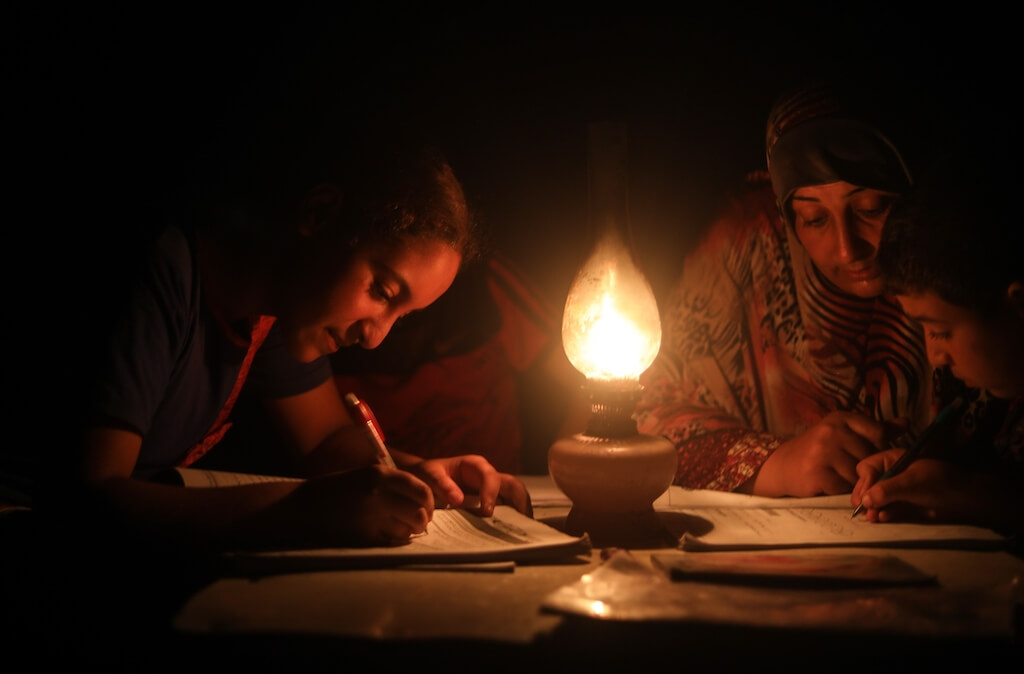 A woman helps children study under candle light during a power cut in Khan Yunis, Gaza on August 18, 2020. After Israel tightened the blockade in Gaza Strip, the only power plant in the area stopped production affecting the life especially the health sector. Photo by Mustafa Hassona. Anadolu Agency.

The power outages crisis in the Gaza Strip has created new industries, some of which have been exploited by greedy merchants. Nearly every household in Gaza has a generator. As fuel prices jumped to 7 NIS (more than $2) per liter, following the destruction of many tunnels connecting Gaza with Egypt that were used to smuggle fuel, fewer people were able to run their generators.

In 2011-2013, when Egyptian fuel reached Gaza, most people turned on their generators at the same time, creating excessive noise pollution in the overpopulated coastal enclave. As this industry developed more and with fewer people able to run their own generators in the Gaza Strip, another private industry emerged with private electricity networks and companies being established. People interested in six extra hours of electricity pay approximately $50 a month and are able to use their lights and turn on their TVs –  but not their fridges or electrical devices that consume a lot of energy.

With unemployment rates rising by the day in the Gaza Strip, only a handful of people can afford to pay their electricity bills, let alone subscribe to private electricity networks. The majority of people choose to leave their oven-like houses for the sea, which tends to be very crowded in the summer. The lack of electricity has also affected people’s ability to pump water into their tanks, creating yet another problem for Gazans.

Read: Overcrowded and Under Siege: Worrying Pandemic Scenarios in Gaza

So far, the international community has failed to provide tangible solutions to Gaza’s ongoing electricity crisis. First, it has failed to make Israel accountable and ensure it does not target Gaza’s already fragile electricity infrastructure. The international community has also failed to pressure Israel to allow the implementation of long-term projects in the Gaza Stirp that would solve the issue of power outages in the coastal enclave such as the proposal by Turkey to send a floating power plant; the proposal by Qatar to convert the power plant so that it operates on gas and to establish a gas line to provide Gaza’s power plant with the needed gas; or Algeria’s proposal to send fuel to operate the power plant.

The Palestinian division between Hamas and Fatah has added fuel to the fire in this regard. In many instances, the Palestinian governments of Gaza and the West Bank would exchange accusations over who is responsible for the crisis. Meanwhile, Israel, the occupying power, which should provide Palestinians with all needed services according to international law, acts with impunity.

The international community should hold Israel responsible and make sure that it provides Palestinians, who live under its tight siege in Gaza, with electricity.

The people of Gaza, who have experienced four major Israel offensives – the latest of which was in May 2021 and which resulted in the destruction of more infrastructure in the Gaza Stirp – deserve to live in dignity and to enjoy full, basic services. The international community should hold Israel responsible and make sure that it provides Palestinians, who live under its tight siege in Gaza, with electricity.

The denial of basic rights to the Palestinians has created a Palestinian generation that sees no hope in achieving a just solution to their plight. Meanwhile, the continuing electricity crisis in Gaza means that it is only a matter of time before another Palestinian family dies in a fire caused by candles.

Israel and the international community should fear the reaction of people like my youngest brother Omar. The situation in the Gaza Strip is unsustainable, and if the dignity and freedom of Palestinians there are not respected, regional security will always be at stake, and it will be a matter of time before another conflict breaks out, bringing even more destruction to Gaza’s infrastructure.

Also Read
“Is It Our Turn to Die?”: Being a Mother in Gaza