Without a shadow of doubt, some genocides are accorded more importance than others. This has to do with international politics. 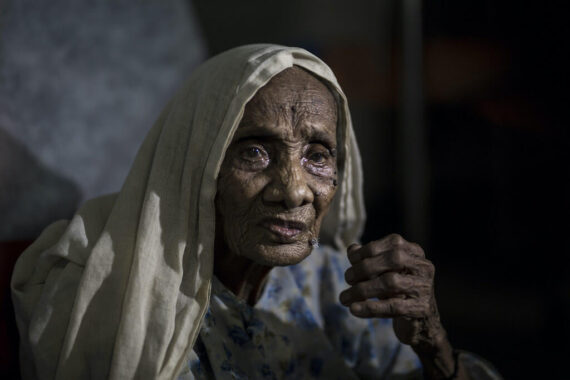 A 120-year-old Rohingya woman Azime Khatun, who fled from oppression in Myanmar into Bangladesh, is seen as she receives medical treatment at Sahra hospital built by Turkey, at Balukhali camp in Cox's Bazar, Bangladesh on April 08, 2018. Photo by Arif Hudaverdi Yaman, Anadolu Images

Undeniably some genocides are accorded more importance than others, explaining the wealth of material on the Second World War compared to other genocides. Funding and scholarships are more easily available for activities related to research and dissemination in the context of the most ‘popular’ genocides, and academic conferences tend to set themes and titles alluding more directly to them.

By now, the rational of this bias is widely explained by the following: first, that the Great White-Northern Powers had and have ongoing connections, in terms of family, religion, culture, or otherwise, to the genocide that took place between 1939-1945—it was after all a genocide committed by Europeans on Europeans in Europe.

Second, by the fact that purely charitable actions are rare, and that if the Great White-Northern Powers are to direct time, energy and other resources into halting genocide, they should have vested interests therein.

Third (another way of phrasing the second) that the Bismarckian concept of realpolitik, that is of adopting strategic interests over moral and ideological ones, aptly explains the conduct of the super powers so far, especially in their decisions to intervene (or not to) in countries plagued by genocide.

All of this may also expound the outright neglect of ongoing genocides (currently the Uyghurs in China and Rohingyas in Myanmar) because tackling them more directly wouldn’t benefit the interests of the Great White-Northern Powers. Interfering with the internal affairs of another state by prodding it to stop persecuting its people may make an enemy of it for instance.

The Doctrine of (State) Sovereignty signifies that neither a state, nor an entity, not even an international one may have an upper-hand over a state in ‘telling it what to do’, preventing even the powerful from intervening—often alluded to as the ‘sovereignty problem’. This often likens the international legal system to a toothless tiger.

History has shown that a state must be thoroughly broken, its government quasi absent for another to intervene and set it in order. Moreover reticence over intervention is explained by the fact that pointing fingers at one state may cause it in turn, if comparably powerful, to point fingers back.

For these reasons, attaching the label of genocide on the conduct of a government is treated with caution. Understanding these dynamics at work is not hard if a parallel is drawn with the way people act towards one another in the upkeep of their relationships.

In lieu of affixing the label of ‘genocide’, euphemisms such as ‘cleansing’, ‘ethnic cleansing’, ‘mass killings’, ‘mass atrocity’ are resorted to.

For long the Clinton administration refused to employ the term ‘genocide’ to qualify the Rwandan genocide (although this practice was endorsed by New Zealand, Czech Republic and the UN Security Council) purportedly as an excuse for non-intervention. Instead, the favoured term of the US government during that period was ‘acts of genocide’.

The atrocities in Srebrenica were also denied the label by the UN, despite recognition by the ICTY and ICJ; instead Kofi Annan referred to it as a ‘massacre’. Rewind a few decades, this was equally a disaster for Cambodia where the Khmer Rouge regime, an ally of China, and hence not of the US, was given recognition in the UN General Assembly soon after its horrendous perpetrations between 1975-1979, despite appeals by other governments decrying its actions.

Equally noteworthy is how the label of genocide is never associated with the acts of the United States, and usually with those of its enemy.

The bias of international courts and organisations towards the superpowers, in particular the United States, cannot be denied.

Equally noteworthy is how the label of genocide is never associated with the acts of the United States, and usually with those of its enemy (or the enemy of another superpower), indicative of how biased the perception is of who is ‘evil’ and who is not. Thus all the principal international bodies have by now labelled the perpetrations of the Khmer Rouge regime as genocide, while sparing the United States of all accusations despite their perpetrations in Cambodia when they waged war against neighbouring Vietnam.

A similar approach was adopted in relation to Iraq under the governance of Saddam Hussein, while the US escaped punishment despite perpetrations that led to the killing of civilians in the country.

Read: From Balfour to the Nakba: Zionist Settler Colonialism

Without a doubt, many of the criminal and condemnable actions of the superpowers are left unpunished, and the politics of genocide are such that these states continue to exert influence over international decision-making, and indirectly, over international courts of law (ICC, ICJ, ICTY).

The recent elaborate rhetoric on the ‘responsibility (of states or other organisations) to protect (others)’ does not seem to have the intended effect on the superpowers which firstly, are still immune when they operate as perpetrators, and secondly have enough leeway to pick and choose when and where they will intervene in fulfilling their responsibility to protect.

The contrast in the treatment of the uprisings in Libya and Sri Lanka as an illustration of the above, is on point. (The United States’ long-standing animosity towards the Middle East is also all the more evident in this case.) Despite the Sri Lankan government’s assault on the Tamil civilians between 2008-2009, Ban Ki-Moon failed to mobilise the UN, attracting criticism by Amnesty International.

In fact the UN Panel of Experts did not make a recommendation to the ICC to launch an investigation for the mass killings even as ‘no-fire zones’ were turned into ‘free-fire’ ones. In contrast, in the case of Libya, Ban Ki-Moon as well as the High Commissioner for Human Rights condemned the Gaddafi regime within days, and an investigation was quickly carried out by the ICC, including the issuance of arrest warrants for Gaddafi, his son, and brother-in-law.

As to the decision on the intervention in Libya, Obama conveniently played his trump card by evoking the desire of the United States to protect states in need of help, saying: ‘Some nations may be able to turn a blind eye to atrocities in other countries. United States of America is different. And as President, I refused to wait for the images of slaughter and mass graves before taking action.’

As a reminder of the directive power of realpolitik, and that no actions are completely charitable as mentioned above, in the same statement Obama went on to mention America’s strategic interests in intervening in Libya.

He highlighted how war in Libya would drive refugees out into neighbouring countries and put a strain over the fragile transitions in Egypt and Tunisia. (It is doubtful that the strategic interests spelled out would be limited to just that.) Such are the dynamics that summarise the treatment of the label of genocide, and the politics involved therein.

So far the main tactic in avoiding the label of genocide in court settings has been to prove the absence of genocidal intent: this has been done by showing that acts of murder were a ‘war act’ rather than part of a larger programme to get rid of a group, an ethnicity, or a genus. As Samantha Power wrote in A Problem from Hell, promises resonating with the slogan ‘Never Again’ have been made by each incumbent President of the United States, but never held.

Sabah Carrim has a PhD in Genocide Studies and Prevention with a focus on the Khmer Rouge era. She has also authored two novels, Humeirah and Semi-Apes, and short stories that have been selected and published in various international short story writing competitions. She sits on the Advisory Board of the International Association of Genocide Scholars (IAGS) as Emerging Scholars Representative. Sabah is currently recipient of the W. Morgan and Lou Claire Rose Scholarship for a MFA in Creative Writing in Texas State University in the United States.