How will Oman Respond to the U.S. Sanctions on Iran?

With its years of experience in neutral policies, one would consider that Oman would find a way to respond to this crisis with minimum damage to its existing priorities. 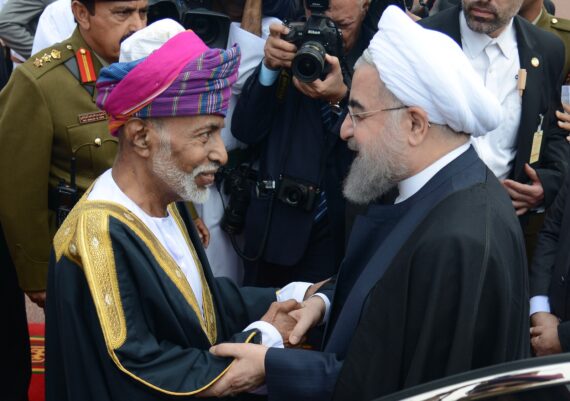 Oman has long been known for its efforts to pursue a politically neutral position in the Gulf region. Close cooperation between Iran and Oman dates back to the pre-1979 Revolution period. The uprising that took place in Dofar in the early 1970s and targeted Sultan Qaboos was suppressed with the help of the Iranian Shah. The friendly relationship between the two countries has continued since then. Due to this close cooperation, the Omani leadership has tried to stay out of the existing political formation against Tehran.

This situation has been endangered in recent years due to the increasing competition between Saudi Arabia, the most powerful member of the Gulf Cooperation Council of which Oman is a member, and Iran. Tehran’s continuing expansionist policies in the region are considered as a threat for Saudi Arabia and its allies in the Gulf. In this regard, Riyadh has also put pressure on Oman to reconsider its relations with Tehran. Oman, however, is disturbed by this attitude of Saudi Arabia and did not want to be a party to political conflicts between these actors.

One recent aspect of Saudi Arabia’s pressure on Iran is the support of the Trump administration in the U.S. Recently, Trump announced his new package of sanctions, which are intended to further pressure Tehran. Washington is expecting Muscat to support these policies. It is important to mention that due to its strategic position in the Strait of Hormuz, Washington has attached importance to establish strong relations with Oman. The U.S. administration has signed a military cooperation and a free trade agreement with Muscat in order to deepen its relationship with this country.

Tehran’s continuing expansionist policies in the region are considered as a threat for Saudi Arabia and its allies in the Gulf. In this regard, Riyadh has also put pressure on Oman to reconsider its relations with Tehran.

The recent visit of Israeli Prime Minister Benyamin Netanyahu to Oman is another sign of pressure that the anti-Iran alliance has been putting on Muscat. Israel is also one of the most eager supporters of the sanctions on Iran. When Netanyahu’s unscheduled visit to Oman is considered in this regard, it can be argued that Tel-Aviv also put pressure on the Omani leadership to comply with the U.S. sanctions.

However, the close cooperation between Oman and Iran leaves the Muscat administration in a dilemma for taking a serious stand against Tehran. One of the main reasons for this is the positive conclusion of the negotiations, which lasted about 10 years, for the natural gas pipeline project that is planned to be built between Iran and Oman through the Strait of Hormuz. The pipeline, which is planned to start from the port of Kuhmobarak in southern Iran and costs 1.2 billion dollars, will enable the transfer of 28 million cubic meters of natural gas per day from Iran to Oman. While Oman plans to use natural gas from Iran for its own needs, it aims to become an LNG exporter as well. Muscat also aims to diversify its economic activities and therefore the gas pipeline is of crucial important for this long-term projection.

The close cooperation between Oman and Iran leaves the Muscat administration in a dilemma for taking a serious stand against Tehran.

All in all, there are three major dynamics that the Omani leadership had to consider when it comes to responding to the U.S. sanctions on Iran. First of all, the commercial, historical, and cultural relations between Oman and Iran are deeply rooted. Secondly, Oman’s close relationship with Saudi Arabia is of crucial importance and should not be damaged. Finally, Oman’s international allies such as the U.S. and Israel want Muscat to join them in their policies against Tehran. Considering these dynamics, the Omani leadership had to find a way to successfully respond to the rising tension between Iran and other regional and international actors. With its years of experience in neutral policies, one would consider that Oman would find a way to respond to this crisis with minimum damage to its existing priorities.