If a country accepts that right-wing extremists entered the parliament due to 890.000 refugees who came to Germany, what will this country do if a real crisis arises? 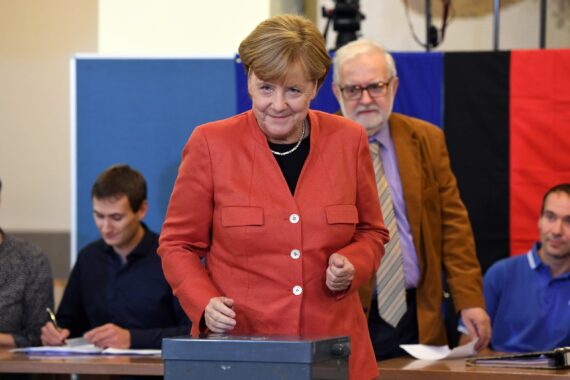 With no surprise German Chancellor Angela Merkel won the federal elections on 24th September while major parties, including her own, suffered the worst-ever losses in German political history since 1949. In her early statements subsequent to the initial projections of the election results last Sunday, Merkel commented on the results with the words “we reached the strategic goals of our election campaign.” During a time period where Europe and so-called “Western values” are facing populist and right-wing challenges, Chancellor Merkel’s Christian Democrats (CDU/CSU) will once again become the only group able to build a coalition government in order to rule Europe’s most ‘powerful’ country for an additional four years.

Due to the deficit of the German parliamentary system, the building of a coalition including the negotiation process can last until Christmas of this year, or even longer. Merkel, who just started a new election campaign on the state level in Lower Saxony with regard to the elections on 25 October, will once again arrange a new coalition government. On the federal level, it is currently impossible to build a coalition government against the Christian Democratic parties by all the other five parliamentary groups. By gaining only 32,9% of the votes, Merkel’s Union will have 246 seats while the Social Democratic SPD (20,5%) 153 seats, the right-wing populist AfD (Alternative for Germany) party (12,6%) 94 seats (92 without Frauke Petry and Mario Mieruch who recently quitted their party), Free Democratic FDP (10,7%) 80 seats, the left-wing Linke (9,2%) 69 seats and the Greens (8,9%) 67 seats in Germany’s Federal Parliament, the 19th German Bundestag.

With regard to the current number (709) of deputies in the parliament, the support of at least 355 MPs is required in order to elect the Chancellor of the new federal government. Another important result of the recent election is the fact that the two major parties reached just 53 percent of the total vote, which is the lowest combined share ever in German political history (for instance in 1987: 81,3%; 1998: 76%; 2013: 67,2%). The rationale behind this can be elaborated as a new trend according to which the German electorate diminish their traditional party allegiance and vote for other, small and even extremist parties.

Since its establishment in 1949, Germany has been governed by Christian Democrat Chancellors for approximately 48 years. For instance CDU leader Merkel has been governing the country for twelve years – and will most probably l continue her job as Chancellor for an additional four years. On the other hand, the Social Democrats have only occupied the powerful Chancellor position for 20 years in total. Generally the federal governments in Germany consisted of two party coalitions with a major and junior partner; or, as was recently the case, between 2005-2009 and 2013-2017, of a so called “grand coalition,” which is a constellation of the Christian Democrats and Social Democrats.

With the disastrous election results for both major parties, a new debate started whether a grand coalition undermines the efficient political culture in Germany. Even though Merkel still considers a potential grand coalition, the Social Democrats do not share the same feelings towards Merkel’s such ambition. According to the current election result, the SPD ruled out joining any grand coalition due to the fact that the AfD –as the third largest parliamentary group– will become the main opposition party. A no-go in post-war Germany? According to the SPD the answer to this question is yes. However, Angela Merkel did not speak against this possibility. Actually, it is too early to predict a concrete government constellation. An additional reason for the harsh position of the SPD is most likely the fact that the Social Democrats’ two worst election results since WWII have come directly on the heels of playing the role of CDU/CSU’s junior coalition partner (2009 & 2017). Consequently the SPD, still led by Martin Schulz and who took the responsibility for the worst election of the party after WWII, does not prefer to join Merkel’s government once again.

Although the SPD is tendentious to become the main opposition in the Bundestag, Angela Merkel called the Social Democrats to rethink their decision. However, Schulz rejected this offer by elaborating it as ‘waste of time.’ It is interesting to observe that mainstream media, in particular left-wing voices, also insist on preventing such a ‘grand possibility.’ The German political elite, German mainstream media, business circles and big companies call for a so-called “Jamaica Coalition” – despite its difficultness and differences with regard to the involved parties’ programs. A ‘Jamaica Coalition’ – so called because of the three parties’ colors black-yellow-green – seems to be the only likely government constellation consisting of the CDU/CSU, Liberals/FDP and the Greens. This will be a first in German history as there has never been a three-party coalition forming government on the federal level. This option is also problematic as was reflected in the recently established Jamaica coalition in Schleswig-Holstein, where the parties needed several months to reach a coalition agreement.

While the German political system does not provide a deadline for a coalition to be set,  the new 19th Bundestag must come together by 24th October. Within this instability, Merkel is ruling out the option of holding a second election by emphasizing respect for “the German voters’ decision.” With regard to a Jamaica coalition, it is likely that the first negotiations with party representatives of the CDU/CSU, FDP and the Greens will be postponed until the end of the state elections in Lower Saxony on 15 October.

The 24 September federal election also revealed some interesting issues with regard to the German political environment and particularly concerning some leaders’ approaches.

For instance, while not resigning from the party leadership position, SPD’s Schulz took responsibility for the party’s defeat and made it clear that he will not act as the party’s parliamentary group leader. If one examines his statements, it becomes apparent that Schulz still appears very aggressive for instance by addressing Chancellor Merkel. For instance, during the “elephant round” which generally takes place right after the election, Schulz was actually in a fighting mood against the Chancellor. For some minutes Schulz harshly attacked Merkel by literally calling her as “the biggest loser.” Furthermore, Schulz charged Merkel with being responsible for the AfD’s strong result by stating “Ms. Merkel has led a scandalous election campaign.”

The same can be said for the newly elected SPD parliamentary group leader Nahles who attacked her former Cabinet colleagues from the CDU/CSU by stating “Starting tomorrow, we’ll be right in their face.” It also seems that members in the SPD do not have courage to criticize and speak up against Schulz’ over-confident decisions and sharp statements. Nevertheless, the current situation of the SPD suggests that the party will become a platform of competition between Nahles and Schulz in the course of the upcoming party congress in December this year, where Schulz, once again, will aim to run for party leadership.

As a result, it can openly be stated that the entering of AfD into the Bundestag is a federal reflection of the German political reality, which is currently the case in 13 of 16 German federated state parliaments. With the federal election on 24 September, the contemporary reality ultimately reached the federal capital of Germany. Thus, despite the disappointment and frustrated statements on media outlets and in political circles, it is not true that this result caused an actual shock wave in German society. Moreover, instead of being surprised the mainstream parties have to reorganize and create efficient approaches and alternatives.

To some extent, the result was predictable and now this has to be addressed seriously without an overestimation of the AfD. With no doubt the striking number of right-wing, extremist and populist AfD deputies in the federal parliament is perceived as a new challenge for the German political elite in Berlin. Thinking about the potential total number of MP assistants and other AfD-employees of each AfD deputy, who will also enter into the Bundestag,  it becomes clear that the political mood in Berlin will be tense when trying to communicate with far-right politicians and affiliated employees. Nevertheless, Berlin-based political scientist Oskar Niedermayer states that the AfD in parliament should not be overrated; above all due to the fact that no political group wants to build a coalition with the far-right populists. However, Niedermayer also emphasizes the possibility that the Bundestag’s debate culture could be worsened due to some racist-nationalist AfD deputies’ actions and behaviors. In the context of the AfD, some polls revealed that more than 60 percent of current AfD voters cast a protest vote. Thus, this vote should not be considered as an expression commitment to the AfD’s party program. In addition, 50 percent of AfD voters described themselves as critical of the party for not doing enough to distance itself from the far right.

That is to say; first of all, the AfD should not be overrated as previously stated. Secondly, the right-wing populists should be prevented from dominating the Bundestag by abusing several mechanisms. Whether this will be possible is one of the main challenges the main parties, above all the government parties, the main opposition party and some key figures have to think about. Under these circumstances, the wrong path for mainstream parties would be imitating AfD’s racist discourses and populist statements. Unfortunately this was the case when CSU leader Horst Seehofer blamed the CDU/CSU for having left “the right flank open,” which, according to him, made it possible for this gap to be exploited by the AfD. But seriously, what should have been done? Be more racist than a racist party? Or solve the problems of the electorate by accurate and reasonable solution approaches? Preferably, the latter. As it is rightly stated, if a country accepts that right-wing extremists entered the parliament due to 890.000 refugees who came to Germany, what will this country do if a real crisis arises? This question has to be taken into consideration by all; not just by political parties.