A nightmare has not come true – for now. The political elites from Germany's centrist parties and those from the federal but fragile “grand coalition” government have been saved. But this must not mislead anyone. 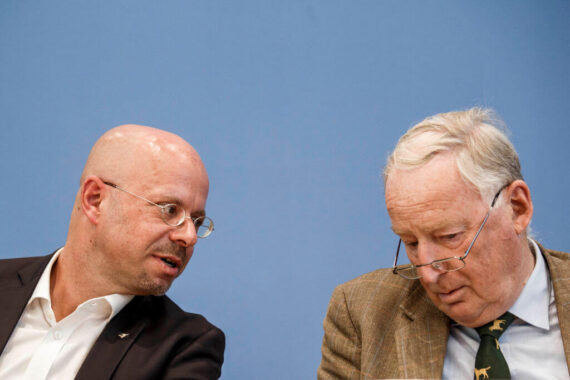 The state elections in Germany’s Saxony and Brandenburg states were held this past Sunday. As was previously expected, the far-right AfD heavily increased its votes, tripling it in Saxony and doubling it in Brandenburg.

The Christian Democrats (CDU) emerged as the final winner of the elections in Saxony with 32 percent of the votes, but suffered losses of around 7 points compared with 2014. While the AfD became the second strongest party in Saxony by receiving more than 27.5 percent of the votes. This means that the AfD made an increase of 17 points compared with 2014.

But one has to be careful when analyzing the results. A look back at the Saxony results from the September 2017 federal election will show that the AfD had also received 27 percent of the votes while the CDU had achieved only 26.9 percent at that time.

It cannot be said that the current election results are an actual success for centrist parties, especially the Social Democrats (SPD) which continued its trend of voter losses. However, the Saxon parliament results have been interpreted as a partial improvement by some optimistic voices, when compared with the September 2017 federal election results in Saxony. According to which the CDU even increased its votes from 26,9 to 32 percent.

On the other hand, when looking at the results across both states an unpleasant picture emerges. Namely, the AfD received the highest number of votes with a combined total of 892.959 votes, while the CDU came second with 892.483 votes. The SPD came third with only 498.618 votes in total. Thus, is it reasonable to talk about an actual victory of the CDU based on the facts?

The election in Brandenburg also revealed that the SPD (by achieving 26.2 percent of votes) is still a strong centrist party, at least in traditionally left-wing dominated federal states. Although the party has continued to lose votes at both the federal and state level – as was the case in Saxony where it received only 7.7 percent of the votes.

In a concerning outcome, one fourth of all the voters across both states voted in favor of a far-right or extremist party. This leads to the possible danger that the far-right will continue to be normalized within Germany’s political landscape. How far this trend will continue is still a main concern among Germany’s Christian democrats, as the main or closest de facto competitor of the far-rightists.

Besides the continuing risks of the far-right becoming mainstream and the increasing strength of the far-right within the political establishment, the focus now is on how the coalition governments will be shaped in the upcoming days. As one should remember, all major parties rejected a coalition with the AfD, but continuing with pre-existing coalitions in both states will not be enough to form a government. Each coalition will need to find an additional partner.

As predicted in a report published prior to the elections, it is likely that in Saxony the CDU will form a coalition together with the SPD and the Greens. In Brandenburg, a SPD-Left Party-Greens coalition might be formed as is currently case in the state of Berlin.

German media and politicians have also been focusing on the fact that surprisingly, the CDU did not lose even more votes to the AfD. The reason why this did not occur can be answered by pointing to the visible efforts of Saxony’s incumbent Minister President Michael Kretschmer (CDU). Kretschmer distanced himself from the federal CDU and also criticized CDU politicians such as Hans-Georg Maaßen, who often expressed stances similar to the AfD.

It seems most likely that some center-right voters were persuaded by Kretschmer’s dedicated personal stance. Whether an imitation of AfD rhetoric by a CDU politician would have resulted in the same outcome seems unlikely. It would likely be worse because voters are often biased towards the parties which are first to articulate a political message or movement, which in the sense of populist and far-right rhetoric is definitely epitomized by the AfD.

Regarding Brandenburg, it is argued that despite the fact that the SPD is still the strongest party, it is much more difficult to establish a stable coalition government consisting of three parties. The losses of the Left Party make it impossible to continue an SPD-Left Party coalition in Brandenburg.  This will most likely lead to a three-way coalition as it the case in Berlin. In the end, the elections are a quasi-success for the AfD in that in the long-term it destabilizes the previous political equilibrium in which centrist parties would dominate.

All in all, it is argued by Western media and politicians that a “nightmare” has not come true – for now. However, the next state elections will be held towards the end of October in Thuringia where the AfD is also strongly motivated. The bad news is when Thuringia’s election day arrives, the focus will not simply be on the CDU or SPD coming first at the ballot. This was recently the case last Sunday, and unfortunately distracted from the grim reality of both party’s losses in each state. In the short-term, the political elites from Germany’s centrist parties and those from the federal but fragile “grand coalition” government have been saved. But this must not mislead anyone.