Germany must face right-right extremism as soon as possible and start a collective struggle against the threat on political, societal, and of course bureaucratic platforms. But above all, should prepare for this threat in Germany’s security apparatus. 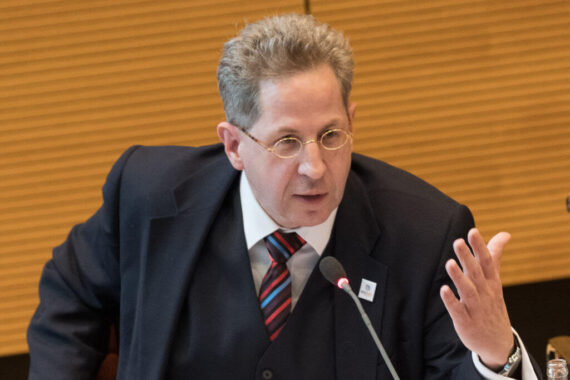 Hans-Georg Maaßen (CDU), former President of the Office for the Protection of the Constitution, takes part in a discussion event of the Berliner Kreis in the Union. Jörg Carstensen/picture alliance via Getty Images

During the past weekend, former head of Germany’s federal domestic intelligence, that is to say, the country’s previous federal “spymaster,” Hans-Georg Maaßen, gave a very controversial speech in the southern German city of Weinheim. Maaßen is the person who in the near past openly came against Germany’s Chancellor, Merkel – to the person whose authority he was actually working under. The title of his one-hour long speech was “Germany in danger – why we have to defend our security.” The event was organized by the local Christian Democrats (CDU) and the so-called “Werteunion” (union of values), which can be described as an association of conservative CDU members, who challenge Merkel’s rather liberal policies.

Maaßen has also been a member of this association since February this year. The former domestic intelligence chief was invited to hold a speech and due to his current work as an advisor/consultant and advocate/lawyer in the private sector, there was no obstacles for him to do so. When one focuses on the content of the speech, it is possible to notice that Germany has an urgent problem with far-right extremism and the main problem within this is the fact that the threat emanating from this issue is under-estimated.

Hans-Georg Maaßen gave a very controversial speech in the southern German city of Weinheim with the title of “Germany in Danger: Why we have to defend our security”

It is quite known that –particularly German nationalists- are generally cautious when explaining their actual positions. Due to this, they tend to use sentences such as “one should be allowed at least to say this or these things…” in order to legitimize their – generally – either prejudiced, racist, or far-right sentiments. Similarly, Maaßen stated, “I’m always happy when I can leave Germany,” due to the alleged fact that by temporarily leaving Germany for a trip abroad, he is then able to convey his opinion. This, according to him, is not possible in Germany.

It is interesting and of course –ultimately- legitimate that Maaßen is not a supporter of a positive migration policy in contrast to Merkel, as he stresses his stance by mentioning, “I’m not a friend of immigration policy,” which his CDU audience in the room applauded with joy.

Maaßen continued his words, which he most likely elaborated as being a mouthpiece for all “quiet but angry conservatives” with his controversial statement:

“I did not join the CDU thirty years ago to allow 1,8 million Arabs come to Germany today” (Ich bin vor dreißig Jahren nicht der CDU beigetreten, damit heute 1,8 Millionen Araber nach Deutschland kommen), while adding that –allegedly- none of these people are both able or willing to integrate.

These statements are not unacceptable because the person who made them held a very high position in office until only recently. It would be nonsense to problematize the ethnic-stigmatizing language and word preferences of a person who did not act as an official person free of biases during his reign, but quite the opposite, rather protecting and maintaining actions of obvious far-right circles. One may just remember what happened towards the end of Maaßen’s tenure in office.

Hans-Georg Maaßen said: “I did not join the CDU thirty years ago to allow 1,8 million Arabs come to Germany today.”

For instance, in September 2018, Maaßen had doubted the authenticity of a video that showed openly racist violence in the German city of Chemnitz. Furthermore, he ignored and even challenged the official view of the country’s Chancellor. In addition to his previous statements, similarly underestimating and even relativizing positions regarding far-right extremism, led the federal minister of the interior to ultimately change the head of domestic intelligence. Even though the ultra-conservative federal minister of the interior, Horst Seehofer (CSU), initially resisted to dismissing him, he appointed a new name to the office due to heavy pressure from both moderate government circles and the media.

Despite Maaßen’s recent discriminating tone with regard to “Arabs” and its generalizing incline, which is not acceptable from a global enlightened and even humanist point of view, which also contradicts the German constitution, it seems that the new head of domestic intelligence, Thomas Haldenwang, unfortunately prefers similar biases – or at least discourse until now – which recently became obvious. For instance, following the publication of the annual security report of the domestic intelligence service, the new head once again relativized the far-right threat.

Despite Maaßen’s recent discriminating tone with regard to “Arabs”, it seems that the new head of domestic intelligence, Thomas Haldenwang, unfortunately has a similar bias.

Furthermore, although there has not been an increase in Islamic extremism-related crimes compared to right-wing extremist ones, both the media, politics and intelligence officers have focused on the former rather than the later. In this context, Haldenwang said: “…we have had to see the emergence of right-wing extremism in recent years depends on many circumstances. … In my opinion this has a relation with current political developments and possibly also with the refugee and migration policies since 2015,” thus criticizing Angela Merkel without addressing the actual reasons for the increase of far-right extremism.

All these statements were made in a recent time period when a district president in Germany, Walter Lübcke, who was a member of the conservative and ruling CDU, had been assassinated in his home. Also during a time period in which almost every day a new kind of scandal breaks out, such as the current news that a German far-right group “used police data to compile a death list.”

Although there has not been an increase in Islamic extremism-related crimes compared to right-wing extremist ones, both the media, politics and intelligence officers in Germany have focused on the former rather than the later.

Under the current conditions and developments in Germany, the former intelligence chief’s unacceptable statements have to be taken seriously into account, in particular by rational politicians from all political blocs. It is unfortunately an increasing trend that far-right discourses and even expectations are becoming more and more “normal.” This must not occur. However, voices among the democratic conservatives are decreasing and social-democratic parties are being reduced to an insignificant meaning within German politics. At the current moment, it does not look very positive for Germany’s political landscape and its equilibrium in the near future, if one also observes statements by Hans-Georg Maaßen who oddly describes his political stance as “realistic.” In addition, Maaßen’s elaboration regarding the question whether he is the “Thilo Sarrazin in the CDU,” by answering, “No, because unlike Sarrrazin, I believe that I am not alone with my opinion” unfortunately seems to be the reality.

Germany must face right-right extremism as soon as possible and start a collective struggle against the threat on political, societal, and of course bureaucratic platforms. But above all, should prepare for this threat in Germany’s security apparatus.