The SPD decided to continue to support Merkel’s current grand coalition but it is likely that the new leaders will renegotiate the terms of their support. 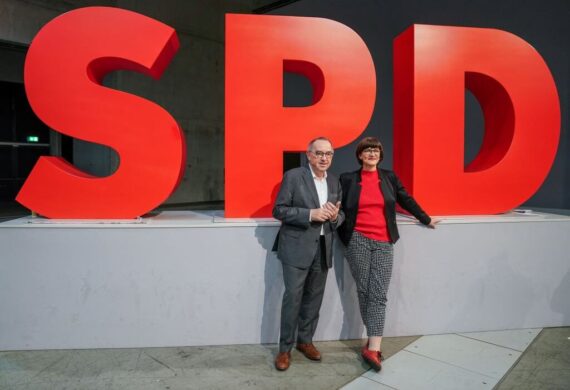 The SPD’s party conference took place in Berlin where the delegates confirmed the new leadership of Saskia Esken and Norbert Walter-Borjans, and five new vice chairpersons among other executive figures. The SPD also approved a draft of social reforms which may be used to negotiate with the CDU/CSU coalition partners in the upcoming weeks.

Among the new vice chairpersons was 30-year-old Kevin Kühnert, the leader of the Young Socialists (Jusos), the SPD’s youth organization. Some voices have argued that no other youth politician has been as powerful as Kühnert.

During the party conference, some significant decisions were also made. Namely, the SPD eventually, and surprisingly for some hasty commentators, decided to continue to support Merkel’s current grand coalition government with the majority of the SPD delegates voting against a motion to quit the party. Saskia Esken stressed that she was and still is “sceptical about the future of this grand coalition. But with this resolution, we give the coalition a realistic chance of continuing – no more, no less.”

However, it is likely that the new leaders will be inclined to renegotiate the terms under which they will continue to lend their support to Merkel’s government. The SPD’s new co-leaders are in favour of tougher climate protection measures, much more investment in Germany’s infrastructure and a rise in the so-called minimum wage. But these issues will not be raised as an ultimatum, since the party seeks to remain in the coalition.

Following the party conference, however, some polls stated that the votes of the SPD are still decreasing, while others stressed a limited increase. For instance, according to the Emnid surveys, the SPD increased 1 point and achieved 16 percent while the Greens, stood at 20 percent (CDU: 28, AfD: 13, FDP: 9, Left Party: 8). According to another polling institution (Forsa), the SPD decreased its votes to 11 percent subsequent to the election of the new co-leaders, and therefore further deteriorated its popularity among already averse voters.

In addition to the obvious lack of a hopeful mood among German voters regarding the new SPD leadership, it is likely that the party will try to insist on a more left-leaning tax and fiscal approach in the coalition government. Though, it is striking that leading CDU and CSU figures have also started to urge the Social Democrats not to blackmail the coalition partner, as the CDU’s chairperson and defence minister, Annegret Kramp-Karrenbauer recently stated. According to Kramp-Karrenbauer, it is not acceptable to make preconditions such as “if these requirements are not met, then we go.”

Moreover, a leading CDU politician, Armin Laschet, criticized the SPD decisions to invest an additional 450 billion Euros in the upcoming years, stating that it had nothing to do with Germany’s current problems. Laschet also explained that there was already a huge budget, but the problems in Germany were not due to a lacking budget but obstacles in the fields of planning and approval procedures. According to Laschet, what was needed was the acceleration of these processes in order to develop required infrastructure.

Given the current conditions, it seems that in the upcoming weeks, particularly after the Christmas break, a tense talk on the continuation of the coalition might be very likely, despite current pro-coalition positions by the SPD leadership. The main problem though is the centre-left’s general lack of future perspectives. Even though the party was recently able to cement its ambitions to return to actual social-democratic policies it is unlikely that these policies can be implemented by the new co-leaders, who do not cause any kind of euphoria among the masses.

The rising popularity of the far-right in general, and, more importantly from the SPD’s perspective, the increasing support of the ecological Greens Party among centre-left circles, is increasingly threatening the 150 years old SPD. Thus, their goal of extending the party’s current votes  up to 30 percent of the electorate during the next federal elections is unconvincing given the new party program. Whether the new party program will be the only component to remerge as a successful centrist party, or whether other important factors need to be considered will be the most pressing task facing the SPD, the answers to which the SPD would need to soon find and immediately implement.

Also Read
SPD’s Uninspiring Elections Will Lead to No Change