Has the Libyan Civil War Come to an End?

Though we hope progress in Libya will continue, we are only at the beginning of the beginning. Recent history shows how difficult the road ahead will be. 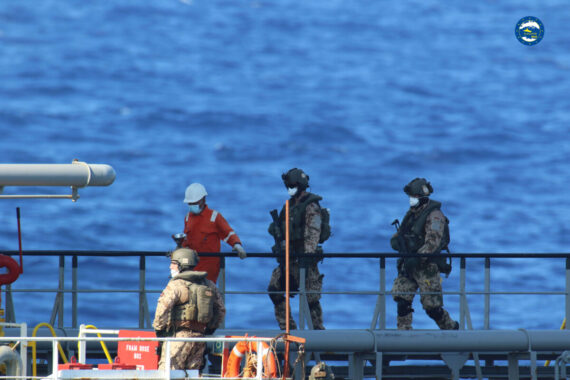 Merchant Vessel Royal Diamond 7, a ship carrying jet fuel from the UAE to Libya's Benghazi, is stopped to enforce UN arms embargo on Libya within the Operation IRINI launched in May by EU, on September 10, 2020. Photo by EUNAVFOR MED IRINI OPERATION via Anadolu Images

On October 23, a ceasefire was signed following the successful campaign by Libya’s internationally recognized Government of National Accord (GNA) to roll back General Khalifa Haftar’s offensive on Tripoli with Turkish military help. All units are supposed to return to their camps and all foreign forces [including training crews] to leave within three months.

Registration was to begin immediately with a view to integration or demobilization. Land and air crossings are supposed to be opened and media escalation and hate speech to halt. A joint security room will form a monitoring force. The 5+5 Joint Military Committee (JMC) will develop a mechanism with the United Nations Support Mission in Libya (UNSMIL) to monitor the implementation.

Signs of hope in Libya

Some real progress has been made. Despite an attack by Haftar forces on Ubari November 28, the ceasefire has generally held and exchanges of detainees have continued. Flights between Benghazi, Tripoli, Sebha, Ghat and Ubari have resumed. Oil production, almost stopped after Haftar closed most sites in January, is now back to pre-blockade levels of 1.2 million barrels per day.

While the 5+5 JMC continues to meet, political and economic negotiations are also happening. On December 7, the Central Bank of Libya held its first unified board meeting since 2014 to discuss exchange rates. UNSMIL has facilitated virtual and in-person sessions of the Libyan Political Dialogue Forum [LPDF] on reforming the executive authority. Defying pro-Haftar Speaker Aguila Saleh, 127 out of 200 members of the House of Representatives met in Ghadames and agreed to choose a new speaker at their next session scheduled for December 21.

Saleh held a rival “official” session in Benghazi but less than 20 members showed up. His removal would be a blow to Haftar and his foreign backers: the United Arab Emirates (UAE), Saudi Arabia, Egypt and France. Saleh has been the effective civilian face of the eastern government despite Haftar’s attempted dismissal of all civilian authorities on April 27.

All of this is largely positive. So, has the civil war come to an end? Though we hope progress will continue, we are only at the beginning of the beginning. Recent history shows how difficult the road ahead will be.

Elections in Libya can be a step forward

According to the LPDF plan, presidential and parliamentary elections should be held December 24, 2021. This would be an important step, if they take place and are reasonably free and fair. However, as we saw before, elections are not a panacea. The results must be broadly accepted. Then comes the infinitely harder and more important challenges of making laws and governing. Between now and then other major obstacles remain.

The two sides have not begun to withdraw their combatants. Addressing the LPDF on December 2, UNSMIL acting chief Stephanie Williams noted that 20,000 foreign forces still on Libyan soil besides continued hate speech and human rights abuses.

While Turkish troops remain, Haftar’s foreign allies will not want to leave if the UAE and Saudi Arabia continue to pay the bills.

Haftar began his April 2019 offensive just days before a UN supported peace conference was to start, so the GNA is unlikely to want to give up its protector. Turkey has already indicated its forces will stay as long as the internationally recognized government wants them to.

While Turkish troops remain, Haftar’s foreign allies will not want to leave if the UAE and Saudi Arabia continue to pay the bills. One option would be a reasonably robust international peacekeeping mission to monitor the ceasefire and help separate the parties.

Longer term, will the LPDF road map be respected? In particular, will Haftar and his domestic and international supporters accept any agreement where he is not at least Minister of Defense or Chief of General Staff? Will the GNA military and especially the Revolutionary (Thuwwar) groups accept any outcome where Haftar has an important position?

Barring a recurrence of health problems for Haftar, his role could be framed as part of a group decision making process in a transitional period. Aside from the potential obstructionism inherent in such devices, Haftar has so far not shown himself amenable to compromise.

Then there is the question of what to do with the different armed formations. At the end of any conflict there is a brief window of opportunity to create a foundation of stability. It then takes a good 10-20 years to build solid, professional institutions under democratic control. Even with the goodwill of a successful revolution, the Libyan leadership thrashed around in 2012-2013 as they tried to sort themselves out.

Institutions had to be rebuilt under the oversight of newly democratic institutions trying to figure out their own role. Libyan pride and nation-building fatigue meant that the country only got a “light footprint” presence from the international community. Less fragile countries with much better structures like Macedonia had received considerably larger help over a much longer period.

Officials of Search and Identification of Missing Persons conduct excavation work at a mass grave in Tarhunah, Libya on November 07, 2020. At first, eight mass graves were found in Tarhunah, which was captured from the militia affiliated with the warlord Khalifa Haftar's armed forces, by the army of Libyan Government of National Accord. Photo by Hazem Turkia, Anadolu Images

In 2012, most combatant troops were revolutionary fighters with little formal training. With barely any regular junior officers and troops, revolutionaries did most of the work on the ground with minimal supervision.

Qaddafi left hollowed-out security institutions. Most of the officers were colonels and most of the enlisted personnel were sergeant majors – generally near retirement age. Authorities constantly squabbled among themselves. In 2012, most combatant troops were revolutionary fighters with little formal training. The old guard and the revolutionaries did not trust each other much. With barely any regular junior officers and troops, revolutionaries did most of the work on the ground with minimal supervision.

Inevitably, many became used to their entitlements and reluctant to reform. While able to come together to combat existential threats like the so-called “Islamic State” [IS or Daesh] or Haftar’s advance on Tripoli, they tend to fight amongst themselves and against the Government when not under imminent danger.

There needs to be a comprehensive plan, accepted by most, if not all, with effective coordination. Transitional mechanisms will be needed for the different formations to come under an overarching structure with a generous, unified benefits structure for pay and retirement to avoid jealousy. This is essentially what South Africa did at the end of Apartheid.

Though that country still has issues, it has avoided falling back into civil war. A professional training mission should support this transition, focusing not just on basic training but also on effective democratic governance of the security sector. Ideally, this would be an international mission with a NATO backbone since it has the infrastructure. If it is composed of only a few countries, Libyans may not trust it. Fortunately, there are some plans created in 2012-2013 that lay out a vision of what Libyan security forces could look like, so the work does not need to start from scratch.

A major factor will be the incoming American administration. Under President Obama, the U.S. did not get engaged much until IS arrived. President Trump was even more nonchalant, particularly given his indulgence to Middle Eastern autocracies, until Russia’s Wagner Group mercenaries started showing up.

President-elect Biden has declared that he will be less permissive. A recent report by the Defense Department’s Inspector General invoking UAE funding of these fighters is a factor in bipartisan Congressional opposition to arms sales to the UAE, Saudi Arabia and Egypt. As they fight back with their impressive public relations arsenals, we will have to wait a few more months to see whether real change will come.

Disclaimer: The opinions above are those of Mr. Reid alone and do not purport to represent the United Nations.