Have Relations Between Turkey and the US Normalized?

President Erdogan signaled a new wave of military operations in the south of the country and stated that Turkey was adamant to cleanse the east of the Euphrates River from all terrorist (PKK) elements. This, no doubt, will be a new test on how “healthy” the relations between Turkey and the U.S. are. 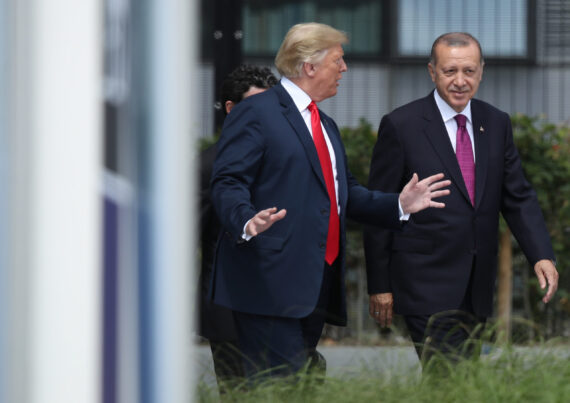 We have been living in a unipolar world since the end of the Cold War. The U.S. has been the sole major power. However, the structure of the international system has been evolving away from unipolarity due to the disproportional growth rates among states. Accordingly, there are states that speedily head to gain the status of major power. China in particular has increased its military and economic capacity in a short span of time, which is expected to reach the level of development that facilitates it to challenge the primacy of the U.S. So, a bipolar world is rising.

Besides, recently, new regional powers have emerged. Brazil, South Africa, and Turkey, are among those powers. The rise of regional powers, though it does not complicate things much at the global level, puts pressure on the U.S., which, as the only major power, engages in the politics of regions such as the Middle East as an off-shore balancer. Losing the control of a region may undoubtedly have political repercussions on the international level. That may give way to penetration of another extra-regional power or worse lead to the emergence of a regional hegemon, which may happen to rise as a global power in the long run.

Russia’s enhancement of its influence and Turkey’s tendency to act autonomously in the Middle East can be cited in this context. The relative decline of U.S. power in the Middle East has prompted Russia to fill the power vacuum and has urged Turkey to start the process of uplifting its status from a balancer to a hegemon in the region.

Current U.S. foreign policy faces the problem of accommodating China and regional powers like Turkey. So far under the Trump presidency, the U.S. has countered this problem by developing a unilateralist and isolationist foreign policy. This foreign policy basically seeks to contain and overturn the power shift that is now taking place. The Trump administration has taken policies that range from trade war to military tour de force for that purpose. This has been accompanied by the securitization of China and regional power like Turkey in the media.

Nevertheless, especially owing to the domestic political necessities like the upcoming elections for the Senate, the Trump administration has started to take contrary decisions towards these countries. The release of Pastor Andrew Brunson last week, who had been in prison for about two years in Turkey on accusations of aiding the PKK, was reciprocated by signaling to lift some of the economic sanctions that had been imposed on Turkey earlier this year.

Here we should note that Trump seems to plan to use the release of Brunson in his election campaign in order to mobilize the Evangelical and conservative voters to go to the polls and vote for the Republicans for the Senate. Secretary of State, Mike Pompeo, has recently expressed that some sanctions could be lifted. This marks that the period of tension, which was grown by mutual retaliatory political moves, seems to enter into a period of relative normalcy.

However, this should not increase the hopes for bilateral relations. As noted above, relations between Turkey and the U.S. will not be normalized unless the U.S. agrees to accommodate Turkey by admitting its new international status, which is an autonomous regional power. Indeed, in the past, relations between the two countries have witnessed several low points, including the Cyprus crisis in the 1970s. Yet, the reason behind these kinds of tensions was not structural. Turkey was merely expecting for its sovereign rights to be expected. It did not seek to change its status and position in international politics.

Today, Turkey seeks to adjust the international order according to recent changes in its domestic politics and the distribution of power in the region. Turkey does not want to keep playing its traditional role of the “outsider” balancer in its vicinity by following the U.S. leadership and national interests. Instead, it desires to establish itself as an autonomous powerhouse in the region. The U.S. has so far responded to Turkey’s new foreign policy attitude by supporting the terrorist organizations such as the PKK and FETO (led by U.S.-based criminal cult leader Fetullah Gulen), which strives to curb the country’s potentials and capabilities.

In response to this attitude, Turkey has continuously given the message that it will not take a step back. For instance, last week President Erdogan signaled a new wave of military operations in the south of the country and stated that Turkey was adamant to cleanse the east of the Euphrates River from all terrorist (PKK) elements. This, no doubt, will be a new test on how “healthy” the relations between Turkey and the U.S. are.