To overhaul the Trump legacy, President Biden pledged to make his cabinet one of the most diverse in the country’s history. 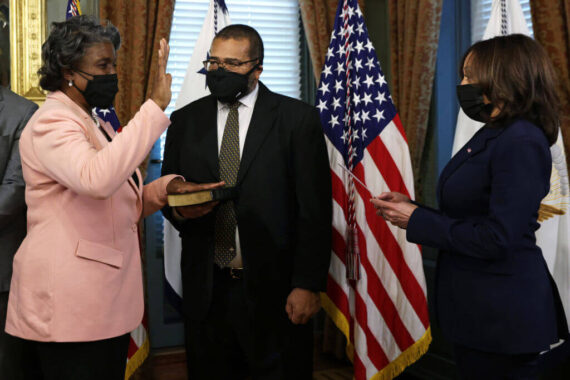 Linda Thomas-Greenfield (L) is sworn in as U.S. Ambassador to the United Nations by U.S. Vice President Kamala Harris (R) as her husband Lafayette Greenfield (2nd L) looks on at the ceremonial office of the Vice President at the Eisenhower Executive Office Building February 24, 2021 in Washington, DC. Photo by Alex Wong, Getty Images

A historic presidential election was held in the United States on November 3, 2020. The election campaigns, the topics discussed, and the bickering between the candidates for the presidency were considered by many unprecedented. Joe Biden won the race and has formed one of the most ethnically diverse administrations in United States’ history.

The U.S. 2020 presidential election was exceptional in many different ways. The new ways of casting votes due to COVID-19, the controversial statements by Donald Trump on the results of the election, and the recount of votes in critical states all made this election different. The Trump administration left its mark on U.S. domestic politics and foreign policy, also leaving behind the highest number of resignations in U.S. administrative history. His administration was also pre-dominantly white – like all administrations before him.

To overhaul the Trump legacy, President Biden pledged to make his cabinet one of the most diverse in the country’s history. It was U.S. Vice President Kamala Harris who first caught the attention of far-right groups. Harris is the daughter of an immigrant family and is of African American and South Asian descent, with a Jamaican father and an Indian mother. She is not only the first woman to be elected as vice president in the United States – she is also the first woman of color to hold this position.

Lloyd Austin, the U.S. defense secretary, became the first African American to be appointed to this position following Senate approval on January 22, 2021. The Secretary of Homeland Security Alejandro Mayorkas, of Cuban heritage, has drawn attention as the first homeland secretary with a migrant background. His nomination was approved by the Senate with 56-43 votes.

These selections haven’t gone unnoticed by Republicans and far-right groups. Mitch McConnell, Republican senator from Kentucky, stated that Alejandro Mayorkas is considered an ethnicity-oriented partisan lawyer with no respect to the state codes and rules regulating the overall conducts of lawyers. Opposing groups criticize Deb Haaland for her supposed potential to increase unemployment and harm the economies of the eastern U.S. regions by preventing oil and gas extractions on federal lands.

Reema Dodin, a member of Biden’s cabinet, is another political figure in the administration who comes from a migrant background. She has Palestinian roots and was born and raised in North Carolina. Her parents immigrated to the United States in the 1960s. Dodin has been elected for the position of deputy director of the White House Office for Legislative Affairs. Her appointment caused a reaction among far-right groups that directed criticism against her over remarks she made 20 years ago when she said Palestinian suicide bombings “were the last resort of a desperate people.” The Biden administration released a statement stating, “Her core values of fighting to expand opportunity and build a stronger middle class remain her driving force.”

Sameera Fazili is a Muslim face of the Biden administration. She has roots in Kashmir, India. Fazili’s parents immigrated to the United States and she served as a lawyer in her earlier career. She has been elected for the position of deputy director of the National Economic Council with a focus on manufacturing, innovation, and domestic competition. Fazili is an advocate of the rights of the Kashmiri people against Indian oppression.

Vice President Harris’s thoughts and plans to have more restrictions on far-right groups’ ownership of weapons make such groups feel worried. Upon taking office, Harris has been subjected to criticisms by far-right groups over regulations to be imposed on some arms manufacturers. The regulation will introduce new laws that restrict the use of weapons and impose a ban on automatic weapons.

Immigrants and ethnic groups constitute the majority of the U.S. population. Currently, people of more than 200 different ethnic origins live in the United States. U.S. citizens of migrant backgrounds and ethnic origins are in favor of the presence of persons deemed fit to represent them in the U.S. administration. The representation of citizens belonging to different ethnic groups is important to convey their voices in the higher echelons of power.

Biden’s decisions show that he wants to ensure ethnic diversity in the bureaucracy and attract small ethnic groups. He might also say he is targeting votes in the next election.

The Biden government states that despite protests, which started with the Capitol Hill riot by right-wing and white supremacist groups such as the Proud Boys and Three Percenters (who are now targeting his cabinet choices), it will preserve the diversity of its cabinet.

The “Let’s Rebuild America” slogan is at the heart of this policy of diversity. The Biden administration may open new doors for ethnically diverse people in the following years, including, among others, providing opportunities for immigrants to acquire U.S. citizenship. More importantly, these efforts are likely also to include combating the rise of white supremacism.