The YPG-dominated SDF may become frightened of how reliable their patron really is. It can be stated that the fear of the U.S. abandoning the YPG-dominated SDF is growing within the ranks of the partners of the U.S. In addition to the developments in southwest Syria, the Manbij roadmap between Turkey and the U.S. led to frustration within the SDF. Especially as the war against Daesh is coming to a near end, the YPG’s trust in the U.S. administration is declining. 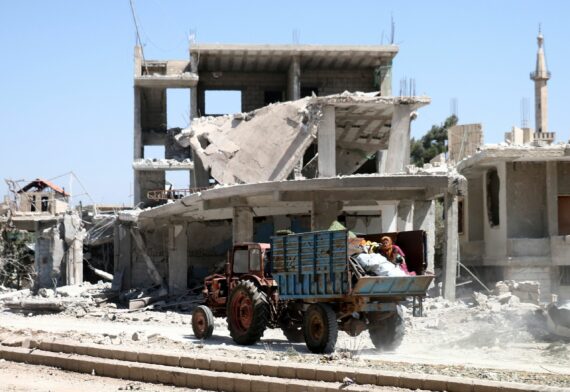 Mid-June this year the Assad regime began an extensive operation in southwest Syria aiming to get control of the last rebel stronghold region. The assault led to the displacement of 320,000 civilians and the regime made considerable territorial progress. However, the current situation in Syria’s southwest also questions the reliability of Russia and the U.S. as both states were guarantors for the de-escalation zone in Deraa.

Following large scale attacks from regime-allied militias and the Russian air force, Syrian rebels first lost ground at the Lajat valley. With time, and with the mediation of Russia, some rebel leaders negotiated a reconciliation agreement with the Assad regime. Even though Russia was (and still is) an active part of the ongoing military assault, it succeeded to position itself as a mediator between the rebels and the regime. To the cost of the Assad regime gaining control over the strategic Nassib border crossing to Jordan, thousands of displaced Syrians began heading home after the rebels and the regime reached a deal in southwest Syria.

While over the years the U.S. convinced Syrian rebels in Deraa to stop their military activities against the Assad regime in exchange for guarantees, the Russians promised to hold back the regime from attacking Deraa. Nevertheless, before the imminent start of the operation in southwest Syria, the U.S. informed the military opposition that they should not expect U.S.-support and political protection against the regime assault. On the other hand, Russia declared the end of the de-escalation zone in southwest Syria.

With the start of the assault in southwest Syria, Russia and the Assad regime gave the Syrian opposition two options: Reconcile with the regime or resist at the cost of a humanitarian crisis through heavy aerial bombardment. Rebels who were in a patron-client relation with the U.S. found themselves abandoned in front of a military superior Russian fire power.

Russia and the U.S. broke their deals with Israel and Jordan

Russia and the U.S. not only abandoned the armed Syrian opposition. Both states had initially made important promises to Jordan and Israel, which they failed to keep. While Jordan feared a new refugee wave, the Israeli government rejected the possibility of Iran-backed militias at the northern edge of the Golan Highs, which is occupied by Israel. Against all agreements between Jordan, the U.S. and Russia on one side, and Israel, the U.S. and Russia on the other, 60 thousands refugees are at the Jordan border and Iran-backed militias are part of the ongoing campaign in Deraa approaching the Israeli border, day-by-day.

For Israel the Russian intervention in Syria came at the cost of a growing Iran-backed militia and Hezbollah presence in Syria with better equipment and supplies. Therefore, the Israeli administration tried to find a solution with Russia and requested U.S. help against any Iranian aggression. Israel did not only limit itself to this, but also took action by itself by bombarding strategic Iranian positions with Syria. Geographically, Syrian rebels in southwest Syria were also a de-facto buffer between Israel and Hezbollah and other Iran-backed militias. With the current developments, Israel faces a bigger threat from Iran and its proxies to its northern border.

In southwest Syria it was the U.S. who abandoned Syrian rebels and opened the way for a Russia-backed regime assault. One may argue that the U.S. lacked any military presence in Deraa in order to stop the Russian assault. However, seven years of war in Syria has showed that the cost of such an assault could become exorbitant if the U.S. decided to supply Syrian rebels with weapons and ammunition. Rising costs of a military operation is a strong argument for Russians to keep their promises. Thus, if the U.S. administration wanted to protect Syrian rebels, it would have done so.

The situation in southwest Syria also draws to the question as to whether the U.S. will abandon its partner forces in northeast Syria – the YPG-dominated Syrian Democratic Forces (SDF) – in the face of a possible Russian assault. It’s known that the Assad regime want to re-gain the control of all of Syria. Until today, the U.S. has protected their partner force from various regime operations in Tabqah and DeirEzzor by using air force, but this may change in the future despite the Pentagon’s plans to expand their investment into their partner forces.

The YPG-dominated SDF may become frightened of how reliable their patron really is. It can be stated that the fear of the U.S. abandoning the YPG-dominated SDF is growing within the ranks of the partners of the U.S. In addition to the developments in southwest Syria, the Manbij roadmap between Turkey and the U.S. led to frustration within the SDF. Especially as the war against Daesh is coming to a near end, the YPG’s trust in the U.S. administration is declining.

One may argue that the nature of cooperation between the U.S. and SDF is quite different from the nature of the U.S. backing the southern front. While the rebels in southwest Syria were part of a “Train & Equip” program of the MOC operation room connected to the CIA, the “Train & Equip” program for the SDF is approved by the U.S. Congress as part of Pentagon’s efforts to eliminate Daesh.

In addition to these developments, the U.S. is only watching while Iran and Iran-backed militias are heading towards Israel despite Israel’s security concerns. If the U.S. isn’t willing or is not able to ease Israel’s security concerns by taking action due to Russian superiority in Syria, what guarantees that the U.S. will secure its partner forces from a decisive Russian position? On the other side, one can also argue that the patron-client relation between the U.S. and SDF is different to that with Syrian rebels in the southeast, as the U.S. installed several military bases in northeast Syria and invested a lot in its client.

However, with the above argument in mind, U.S.-backed forces have already began negotiating the handover of Raqqa to the Assad regime, and reports suggest that a delegation of the regime visited the city, which was captured from Daesh after 1784 airstrikes of the international coalition. According to reports, the negotiations included the arrest of members of an Arab brigade within the SDF – the Raqqa Revolutionaries Brigade. The YPG-dominated SDF and the Assad regime have reportedly agreed for the SDF to hand over the control of the Tishreen and Tabqa dams on the Euphrates River in northern Syria to the regime. Part of the negotiations between the SDF and the regime was also a full handover of Manbij, but both sides couldn’t agree on the role of the U.S. in this case.

Prior to the Trump-Putin summit in Helsinki on July 16, reports emerged suggested a possible deal between the two sides in regards to Syria, which includes Russian and the Assad regime’s expansion of outreach to northeast Syria. According to the Washing Post, this was proposed by McGurk. However, during the press conference given by the two leaders, Syria was only mentioned regarding Israel’s security concerns and the future re-constriction efforts in Syria.

The U.S. decision to abandon rebels in southern Syria facing Russian pressure also meant abandoning Israel and Jordan in many ways. This development may also affect the U.S. position in northern Syria. U.S. partner forces and the SDF have a different patron-client relationship with the U.S. in comparison to southern rebels. The U.S. invested a lot, proved to be ready to protect its client against the regime and officially plans to further invest in its client. Nevertheless, the U.S. retraction in southwest Syria led the SDF to question how reliable the U.S. administration would be in front of real Russia pressure. In this regard, the SDF had negotiations on its own with the regime and agreed to hand over two strategic dams to Assad, trying to ease its dependence from its patron and trying to prevent the regime from risking a confrontation by opening the way for negotiations and deals.