The latest action by CENTCOM of conducting joint patrols with a YPG front group immediately after the Turkish-American joint patrol at the border region, indicates that CENTCOM knows how to sabotage the deal, and is willing to do so to reassert its position as the main policy-maker in Syria vis-a-vis EUCOM. 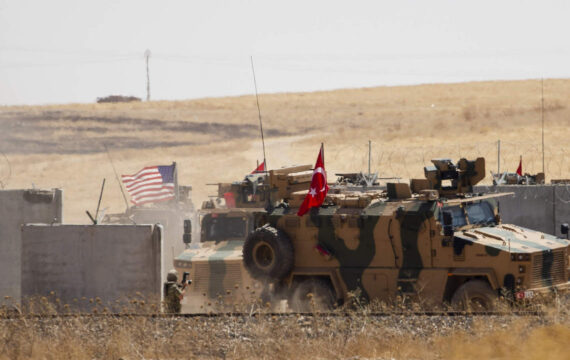 A photo taken from Turkey's Sanliurfa province shows the armoured vehicles as Turkey, US start first joint ground patrols as part of efforts to establish safe zone east of Euphrates in Syria on September 08, 2019. AA

In an earlier column, I wrote that the YPG will continue to harm Turkey-US relations, stating that the formation of allegedly new local military councils by the YPG might sabotage US-Turkey negotiations over the safe zone in northern Syria. Currently, despite the visible differences between Turkey and the US over its labeling and approach, the safe zone deal seems to be progressing, as both sides conducted their first joint patrol east of the Arab-populated Tal Abyad city. However, remarks by Turkish President Erdogan, and the visible differences between the United States European Command (EUCOM) and the United States Central Command (CENTCOM) are strong indicators that the entire enterprise might fail. In this manner, the latest action by CENTCOM of conducting joint patrols with a YPG front group immediately after the joint Turkish-American patrol at the border region, indicates that CENTCOM knows how to sabotage the deal, and is willing to do so to reassert its position as the main policy-maker in Syria, preferring the interests of its local partner over the US, and to undermine the extensive role of EUCOM.

Regardless of how one may assess the deal over the safe zone between Ankara and Washington, the deal stands. But with the deal’s implementation, differences between Ankara and Washington and between CENTCOM and EUCOM have become more visible. While the Turkish Defense Ministry and the published deal between Ankara and Washington speak of a safe zone to be evolved into a peace-corridor, US officials constantly refer to it as a security mechanism instead. This framing by the US is a sign of the attempts to control the discourse around the US-Turkey safe zone deal in Syria, and to avoid making legally binding statements, but it also represents the different approach of both sides. Turkish President Erdogan made the differences clear as he said: “While Turkey is determined to remove the [PKK/YPG] terrorist group [from northern Syria], the US wants to straddle both us and them. It seems that the US is willing to establish a safe zone for the terrorist group”.

The entire safe zone deal becomes even more complicated due to the differences between EUCOM and CENTCOM. CENTCOM has long been the US’s only policy-making and implementing body in Syria and formed a close bond to the YPG terror group. The reluctance of the Obama administration to take strategic responsibility in Syria, and the ignorance of the Trump administration towards the details on the ground enabled CENTCOM to become the sole US actor in Syria. CENTCOM officials, the foremost being Brett McGurk, see the partnership with the YPG-dominated Syrian Democratic Forces (SDF) as a milestone in the US approach to the Middle East. In the eyes of CENTCOM officials, the engagement with the YPG proved effective with low costs and no combat fatalities for the US. Over time, CENTCOM officials not only adopted the ideas and arguments of the YPG, but also made their alignment open to the public, even following YPG-affiliated official and non-official figures and sharing their tweets.

On the other side, EUCOM was more critical of the approach by CENTCOM and underlined the importance of Turkey to the NATO alliance. EUCOM officials have seen CENTCOM activities as steps weakening the NATO front and ignoring the threat perception of a critical NATO ally. The debacle in progress by CENTCOM had to be cleaned up by EUCOM. Therefore, it is no wonder that EUCOM played a critical role in the safe zone negotiations and enabled the deal despite CENTCOM’s resistance. US diplomats with knowledge of the safe zone deal state that CENTCOM was told that they do not have a say on this matter and must accept the deal. Actually, one of the main problems with the deal is the EUCOM-CENTCOM balance of power. Turkey falls within the scope of EUCOM’s concerns, but Syria is within the operational area of CENTCOM. The safe zone deal was brokered by EUCOM, but CENTCOM’s forces have to implement it on the ground. The difference became public when CENTCOM’s twitter account embedded a tweet by EUCOM only to say: “A combined-joint operation between EUCOM, CENTCOM, and Turkey for the security of northeast Syria” warning that the safe zone deal is not a tango between EUCOM and Turkey.

While the safe zone deal with Turkey was formed to address Turkey’s security concerns, the deal might end up provoking rivalry over power between EUCOM and CENTCOM, in which the US State Department and the US Special Envoy James Jeffrey might finally get control over Syrian affairs. The inter-military dispute over the balance between a key NATO ally and a local partner divides EUCOM and CENTCOM. EUCOM’s perspective may be more viable for international relations in a global sense and in the spirit of the NATO alliance, but it’s CENTCOM who is in charge in Syria. CENTCOM’s approach is limited, and prefers to engage with a non-state armed actor. As CENTCOM’s area of responsibility doesn’t cover any NATO state, it doesn’t value the NATO alliance as much as EUCOM. In this manner, the divergences between EUCOM and CENTCOM over how to respond to Turkey’s legitimate security concerns will continue, but CENTCOM has the capability and seemingly the will to sabotage the safe zone deal with Turkey. If CENTCOM wins this round of internal rivalry with EUCOM, the NATO alliance not only might face a huge setback as EUCOM weakens against CENTCOM, but CENTCOM may also grow into a hierarchy problem. People with knowledge about the entire safe zone discussion pointed out that the appointment of James Jeffrey after Brett McGurk’s resignation has been viewed with dissatisfaction by CENTCOM officials, and that Jeffrey and the US State Department have a tough time to enforcing their will on CENTCOM in Syria.

Therefore, the success of the safe zone deal is in the interests of the US State Department and James Jeffrey, and they must reassert control over CENTCOM and re-establish an order of command to ensure that CENTCOM is not a policy-making actor but a policy-implementing figure in Syria. James Jeffrey and the US State Department have long argued that it is wrong to ignore Turkey’s interests and doing so may ultimately end in a bigger escalation. It is only with the push from EUCOM, the threats by Turkey to launch a unilateral military operation and Trump’s unforeseen decision to withdraw from Syria that have enabled the safe zone deal with Turkey. Since the start of the counter-Daesh campaign, CENTCOM has been in charge but despite Daesh’s territorial defeat, CENTCOM isn’t willing to handover the power it shouldn’t have obtained in the first place. Now, Turkey is helping the US to re-establish order in its own house with its threats of unilateral action and with the safe zone deal, but CENTCOM knows how to sabotage agreements. CENTCOM succeeded in doing so during the Manbij roadmap, and this time tries to do so again by portraying the military councils formed by the YPG as local forces. This is despite knowing that such a move can trigger Turkey to end the safe zone deal or stall its implementation process. Such a move may end in a failure for EUCOM, blocking the US State Department and James Jeffrey from gaining control, and allowing CENTCOM to go on as the policy-making actor in Syria.