How effective was Turkey’s fight against terrorism in 2017?

2017 has been a turning point for Turkey’s fight against terrorism as the diversity and differentiation of terror threats, the structural problems in security architecture and the lack of trust in international alliances forced Turkey to accelerate its efforts in this regard. 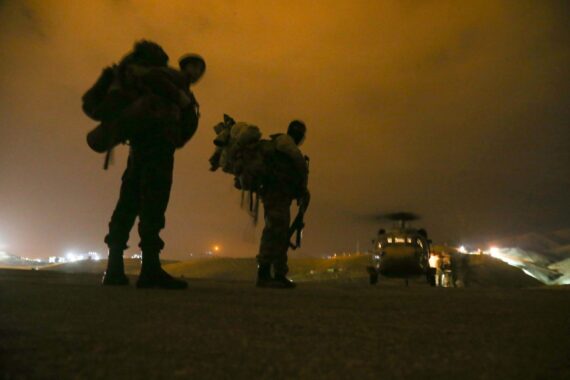 During 2015 and 2016, Turkey confronted multiple and diverse terror threats. Over the course of these years, the outlawed PKK, DAESH and the Revolutionary People’s Liberation Party-Front (DHKP-C) went beyond testing Turkey’s security capacity and dared to reach their separatist, extremist and diverse objectives with the attacks they organized. In a period during which an operational upper hand was accomplished against these terror groups, the July 15, 2016, coup attempt, orchestrated by the Fetullah Terror Organization (FETO), provided these groups with an opportunity to compensate their losses. Due to the lack of qualified human resources in state institutions in charge of counter-terrorism – a problem which emerged after the coup attempt – the PKK, whose urban attacks had been repelled, increased its mobilization in rural areas. More, the West, which not only failed to side with Ankara on issues such as migration, security and defense, but by debarring Turkey from technical amenities, also worsened the challenges Turkey faced in its fight against terrorism.

2017 has been a turning point for Turkey’s fight against terrorism as the diversity and differentiation of terror threats, the structural problems in security architecture and the lack of trust in international alliances forced Turkey to accelerate its efforts in this regard. While the problem of human resources was resolved, the lack of technical source was met with national sources.

What changed in counter-terrorism efforts in 2017?

During a speech he delivered at the Gendarmerie and the Coast Guard Academy on January 20, 2017, Turkey’s Minister of Interior Suleyman Soylu underlined that Turkey’s counter-terrorism efforts had entered an offensive phase. Throughout this year, counter-terror activities have been maintained within this direction and intelligence and operational efforts have gained an upper hand over the terrorist organizations.

As part of the operations launched in 2017, a total of 2,156 PKK militants have been rendered ineffective – 1,560 of these were killed, 238 apprehended and 358 surrendered. In addition, a total of 2,328 abettors were caught. These operations have primarily undermined the PKK’s human resources, a factor declining its mobility. More, the terror group lost its mobility to a great extent due to the loss of intelligence, logistic supply and financial resources that were cut by means of the apprehended abettors.

The Operation Euphrates Shield (OES) continued during the first three months of 2017 and ended the hybrid threats developed by DAESH against Turkey. Following the completion of the OES on March 30, 2017, the fight against DAESH continued through intelligence and law enforcement operations. Foreign fighters who tried to hide among the refugee population have become the main target of operations. The apprehended terrorists who fled through the conflict zones in Syria and Iraq were caught either inside the country or on the borders. With the preventative law enforcement operations organized in Ankara on May 21 and in Istanbul on October 27, DAESH attacks were prevented and their cells and connections were effectively destroyed. Throughout these operations, a total of 3,068 DAESH militants and adherents were rendered ineffective – 1,338 of them were killed while 1,730 were arrested.

In order to boost its international recognition by taking advantage of the Syrian Civil War, in addition with the efforts of some groups to create an unstable atmosphere in Turkey, DHKP-C also activated its militants over the past few years. 2017 has been a tough year for the DHKP-C since the group’s capacity to organize attacks has declined to the point of dissolution. DHKP-C militants, who endeavored to form a living space for themselves within various civil society organizations, began to leave Turkey as they suffered a great loss in their capacity due to the intelligence and law enforcement operations. A number of militants who attempted to flee to countries such as Greece, Belgium and Germany, were rendered ineffective on their way, while others were caught in cities including Istanbul, Ankara and Izmir. As part of the operations against the terror group, one member was killed while a total of 129 DHKP-C terrorists were arrested.

Throughout 2017, attacks organized by terrorist organizations remained below their capacities in comparison to their attacks in 2015 and 2016. The PKK’s conventional attack threats in rural areas, which began in Spring 2017, were repelled due to intensive operational pressure from the Turkish military. Thus, by June, the number of attacks had decreased by a great extent. Due to the intensive law enforcement operations, DAESH and DHKP-C attacks in Turkey were also minimized to a mere zero-point. With well-timed and effective interventions, the attacking capacities of both groups were brought to an end. A DAESH attack, planned to take place on September 6 in Mersin province, was also prevented with a timely intervention.

As indicators reflect, counter-terrorism activities in Turkey have focused on operations against active armed militants and abettors of particular terrorist organizations. While it can be observed that the operations launched against the strategic, operative and tactical leaders of these groups have contributed to the fight against terrorism, their backgrounds need to be improved. As already known, with the aim to capture terrorists, a “wanted” list was issued in Turkey for the first time in September 2015. In this respect, those providing intelligence were rewarded. This wanted list categorizes terrorists into five color-coded groups – red, blue, green, orange and grey – depending on their threat level and positions within the organizational structures without making any distinction between the terrorist groups. As of November 2017, there were 14 terror groups and 791 terrorists on the list – 69 of these terrorists have been killed. When we focus solely on the PKK, DAESH and DHKP-C, the number of wanted militants decrease to 690. However, no change is observed in the number of terrorists rendered ineffective.

If we view Turkey’s fight against terrorism through this list, it can be observed that the government’s efforts have been more influential against leaders on a tactical rather than strategic and operative level. While it is somewhat easier to deal with leaders on the tactical level due to the operational upper hand, the greatest challenge encountered in dealing with strategic and operative terrorist leaders is the fact that these individuals are protected in foreign countries. The capacities to reach and engage with these leaders therefore ought to be improved.

The qualities of operations against terror groups

Operations by the Turkish Armed Forces have been conducted mostly in areas where the terror groups organize their attacks or in the vicinity of their living spaces, infiltration and deployment areas or in the depths of their source areas. Categorically, operations aiming to prevent attacks and render terrorists ineffective have some fundamental qualities. In this scope, the operations can be categorized as follows:

Dynamic protection operations: Tactics of such operations are employed in depth in order to ensure the security of the special purpose activities and facilities. Police and military convoys in rural areas and regular road checks in urban areas are in the scope of such operations. With such measures, threats are kept out of their actual field of activity.

Deterrence operations: These operations aim to deter the terror group from organizing attacks by forcing them to make cost-benefit analysis. Not only the active armed militants, but the activities of financial, logistic and intelligence components are also targeted. These operations are followed by severe legal sanctions.

On-site counteractive operations: These operations have a quality of reaction and begin with the identification of an activity by any terror unit before, during or after the perpetration.

Preventive operations: These operations are directly launched against the terrorist units who are found in preparation of an attack. The aim of such operations is to prevent the attack while also targeting to render the terrorist ineffective. Terrorist groups are generally targeted with various military means by creating a shock effect while the groups are outside of their field of action. Instant air raids and the operations launched by fire support elements or special operation units are within this scope. These types of operations are of critical importance in terms of consolidating Turkey’s fight against the PKK. The fight against the PKK has been solidified as the counter-terrorist activities in rural areas turned from horizontal to vertical engagement. The inclusion of unmanned air vehicles and air force units within the fight against terrorism has inherently increased the influence of preventive operations.

Intervening operations: These are offensive operations organized against terror groups with large-scale and regular military units, special operations units and local paramilitary forces. Intervening operations are long-termed and require the concept of joint operation. They also demand extra efforts in order to form the force structure, enable coordination among forces and develop the notion of joint action. The main purpose here is to retrace, wear down or eradicate terror groups, or to remove them from the field of action. This requires field control and dominance in the zone of operation. Generally, a consolidation operation follows the offensive and the establishment of a local administration system is needed in this sense. Turkey’s OES, which was launched against DAESH, is an example of an intervening operation.

Turkey’s fight against terrorism yielded effective results in 2017, as a large number of militants and abettors have been rendered ineffective. Besides, it has been observed that security forces have enhanced their capacities and established an initiative in all spaces where terrorist groups are active, which consequently, has declined terrorist activities. Nevertheless, it is evident that the inadequate support or reluctance of international allies hampered Turkey’s counter-terrorism efforts. Today, several leaders of the aforementioned terrorist organizations are currently residing in ally (!) countries.

Operations targeting DAESH and DHKP-C are still ongoing with various law enforcement activities. Although preventing terror and eliminating terrorists is crucial for ensuring national security, operational efforts must be supported with public diplomacy, whereas local, regional and international solidary in counter-terrorism must be urged with firm methods. Counter-terrorism activities throughout 2017 forced terrorist organizations to pursue a qualitative and quantitative transformation. The effect of this transformation on Turkey’s security must be analyzed thoroughly in the upcoming years.