There was never innocence within FETO and the members of the criminal cult only paid respect to their leader - Fetullah Gulen - who they believed to be the "messiah." 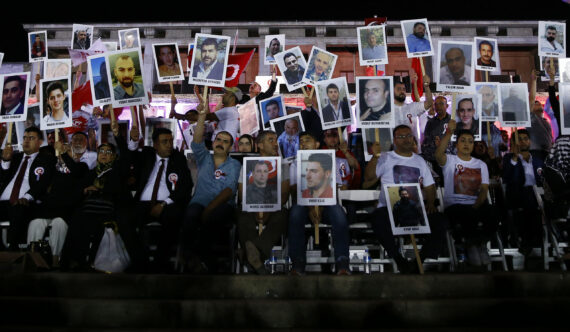 “Once innocence is lost, it’s not possible to find it again,” says Bauman. When people start to taint their God-given nature with or without intent, being aware of it or not, nothing will be like it used to before. In this respect, infer the following inspired by the verses “Are those who know equal to those who do not know?” (Az-Zumar 9) and “The darkness and the light are not equal” (Fatir 20): Are those who protect their candor, innocence and humanity equal to those who do not? Holy texts are full of examples who betray themselves, their society, nature and ultimately God himself by failing to protect their innocence. I believe it’s enough to remind Lucifer’s disobedience and Cain’s murder of his brother Able.

To comprehend the loss of innocence is the issue. Prophet Muhammad (pbuh) defines feeling guilty as “remorse” (Ibn Majah, Zuhd, 30). To feel remorse, one should be aware of its crime; moreover, one should reprimand himself/herself. We see that Prophet Jonah submits to the God Almighty by saying “Indeed, I have been of the wrongdoers” (Al-Anbya 87) despite being a prophet himself, while Lucifer constantly avoids facing his crime and loss of innocence through arrogance (Al-Baqarah 34) and trying to justify itself (Al-A’raf 12). This is where the soul and mind become devilish.

2 years has passed since the heinous July 15 coup attempt perpetrated by FETO. Turkey was in intensive care for a year, trying to come back to life. Our state, its government (Justice and Development Party, or AK Party for short) and those who backed them both (Nationalist Movement Party, or MHP for short) have implemented meticulous policies throughout this process. We have experienced the individual and societal trauma caused by the attempted attack on the state organization and democratic system. It’s without doubt that some were victimized by false accusations and denouncements motivated by the purple brain or personal ambitions. We see that these wrongs are being corrected incrementally.

The discrepancy between FETO’s apparent facet and hidden agenda, thus it’s extreme form of dissimulation (taqiyya), have inflicted wounds to the minds of all Muslims, especially Islamists, the pious and nationalist-conservatives. Firstly, the treatment of this wound isn’t as easy as it seems. An indomitable will by a resolute political administration is required.

Let’s go back to where it all started. FETO, which was deemed innocent by the public prior to 2012, lost its innocence through the December 17-25 events and the July 15 coup attempt. We are facing a structure characterized by Hoffer’s “true believers” and Rokeach’s “closed [dogmatic] mind.” A mental and emotional rigidity with the potential of fanaticism… Caused by unshakeable belief and utmost devotion, this condition was defined as “being a hashhashin,” referring to Hasan as-Sabbah’s original assassins.

Why? Because with the mind-numbing opium, people transform into mindless drones. It’s possible to talk about Marx’s remark that “religion is the opium of the people.” In FETO’s hand, religion turns into an opiate. For this reason, its members don’t feel remorse about attempting to suspend democracy and infringe the constitution along with killing hundreds of people. According to their belief, remorse is only possible if they disobey FETO leader Gulen, their acclaimed “messiah.”

Considering Fromm described such structures as “authoritarian,” it’s easy to understand how the leaders of fascist organizations are idolized. In this respect, loyalty and trust is only reserved for the leader in FETO. The belief that only the leader represents the truth has invaded every cell of their being. They evaluate every knowledge and information only according to their narrow ideology and purpose. If the provided knowledge and information is compatible with the organization’s teachings, it is accepted easily; otherwise, they will deny. “They have hearts with which they do not understand, they have eyes with which they do not see, and they have ears with which they do not hear” (Al-A’raf 179) describes the type of dogmatic and fanatical people in such authoritarian organizations perfectly.

Fanaticism takes only one step from dogmatism. Fanatics possess all the traits of dogmatic thought process and personality. However, they’re more prone to employing violence. Regardless of religious exploitation, rigid authoritarian structures all possess psychosocial issues like seeing the world in black and white, failing to see the grey zones, monopolizing the truth, perceiving the future with a pessimistic outlook, feeling insecure and accepting only other members as their brothers and sisters. All of these could be observed in FETO; yet, there is more: fanaticism. Individual or organizational, fanaticism is characterized by violence and aggression caused by contracting consciousness. In this regard, FETO isn’t only a dogmatic organization, but also a fanatical one.

The December 17-25 events and the heinous July 15 coup attempt has shown that Gulenism believes the ends justify the means and that it is a terrorist organization using violence unfetteredly. Similar to FETO, the PKK with its Marxist and leftist discourse is also a dogmatic and fanatical organization. So, it’s not hard to understand how these two terrorist organizations have found common ground in inflicting harm to the Turkish people and the state. We see that once innocence is lost everything is permitted.

In psychology, such personalities are deemed as morbose and it’s contagious. Brainwashing, inculcation and persuasion  strategies uniform the members, rendering them into one dimensional personalities. Members of FETO and similar organizations always have strong reaction mechanisms; what I mean by this mechanism is that there is a discrepancy between how they appear and what they actually are. Then, lets ask the question again: did the FETO leader and his followers lose their innocence after December 17-25 and July 15? It’s apparent that this organization that employs and encourages dissimulation has used a different language while they speak with pious people, Kemalists, and with a fellow member. This means innocence never existed.

The July 15 resistance is a milestone

There is another question to ask: why does Turkey suffer a coup or a coup attempt, which is backed by external powers, every 10-15 years? The answer should be sought in terms such as trauma, instability and discontinuity. The 1960 military coup traumatized our grandfathers, 1980 coup traumatized our fathers, February 28, 1997, coup traumatized ourselves and the July 15 coup attempt traumatized our children. Could these traumatized generations attempt to develop the country, build a civilization or challenge imperialism and capitalism? They can hardly do it anymore. Due to political instability, development is interrupted. In turn, his interruption creates transitional periods, wasting generations in a decade or so. What needs to be done is clear; we need to be politically stable and achieve continuity in development.

In his book “The Foundations of Civilization,” Will Durant insistently underscores the importance of a resolute state structure, political stability and economic order. Durant also expresses that religion and morality along with advanced scientific researches, literature and arts are indispensable elements of a civilization. It’s high time that we leave our traumas behind, achieve development and stability, and rebuild our civilization. The heinous July 15 coup attempt taught us that coups are history in this country. Nevertheless, the state should be equally distanced from either secular or religious organizations and should try to pull them towards legitimate grounds. Why? “Too much trust is too much indeed,” says Shakespeare.