A final finding of the June 24 elections in Turkey is that neither Turkey’s eastern votes nor its Kurdish votes act as a bloc but intra-eastern and intra-Kurdish differences prevail in the country. 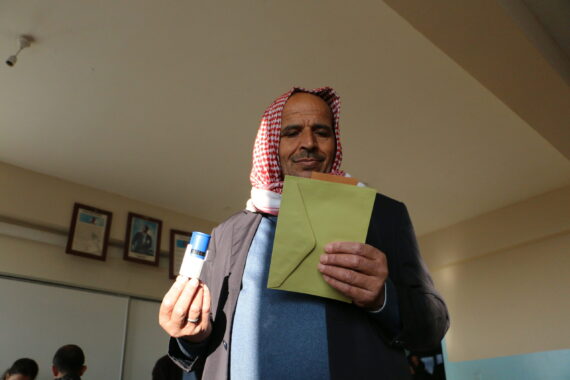 A citizen casts his vote in Sanliurfa province. Anadolu Agency

Last week this column listed four results of the June 24 elections for Turkey’s electorates in the eastern cities, where the country’s Kurds live en masse and which are included in the maps of the imaginary PKK state. They were firstly, the AK Party and the HDP still dominate Turkey’s elections in the east, secondly, the HDP continued its loss in the region – as was the case in the last general elections of November, 2015, thirdly, pre-electoral alliances of other parties cost seats to the HDP, and finally, Turkey’s Kurdish votes do not act as a block but intra-Kurdish differences prevail in the region.

The first one was discussed but the second and third are for this week’s analysis. To begin with, the HDP continued its loss in the region, as was the case in the latest general elections of November, 2015. When compared to the November 2015 elections in the region, the HDP lost most votes in Sirnak (a decrease from 85% to 70%) and Hakkari (from 83% to 70%). In the June elections of 2015, the HDP had received more than 60% of the votes in eleven cities, which dropped to 8 in the November 2015 elections, and finally dropped to 5 in the elections that took place two weeks ago. The most striking drop took place in Bitlis where the HDP received over 60% of the votes in the preceding elections but where the AK Party has become the leading party this past June.

Together with last week’s analysis you read here, these results show that the AK Party and the HDP still dominate the region, where the balance of power tilted towards the HDP during the June 2015 elections, but is now even – if not towards the AK Party. Nevertheless, there is more to the story. Another finding of the June 2018 elections is a novel one.

The pre-electoral coalitions cost the HDP seats in Parliament

The June 24 general elections were bipolar elections both nationwide and in the east. In the east, as it is obvious now, the real race took place between the AK Party and the HDP. For the rest of the country, the elections were mostly between the people’s bloc (cumhur ittifakı) of the AK Party, MHP and BBP and the nation bloc (millet itifakı) of the CHP, Iyi Party and the Felicity Party.

While the race in the eastern cities was not between the AK Party-led and CHP-led blocs, the blocs still made an impact. For example, the HDP could not win a seat in the city of Adiyaman where it got 15,41% of the votes. The CHP, on the other hand, obtained a seat with a vote rate of 12,05. The reason was novel but simple. As a result of the pre-electoral coalition forming process, the Iyi Party and Felicity Party votes were also added to the CHP’s, which in total surpassed the HDP votes.

The examples are not limited to Adiyaman or to the HDP. The other parties also switched seats depending on the total votes of the blocs in different cities but the HDP –which did not take place in any pre-electoral coalition- had nothing but losses with this new regulation.

A final finding of the June 24 elections in Turkey is that neither Turkey’s eastern votes nor its Kurdish votes act as a bloc but intra-eastern and intra-Kurdish differences prevail in the country. Since this findings reaches deeper levels of the region’s sociological facts, let’s tackle it in the next column.