The statements issued by Élysée Palace regarding the Macron-SDF meeting stressed the male and female parity within the delegation. But they did not touch on the fact that many international NGOs issued various reports indicating that the YPG and PKK terror groups, which adopt an ideology with Stalinist and fascist elements, armed 10-year-old children and made 15-16 year-old children organize kamikaze attacks. 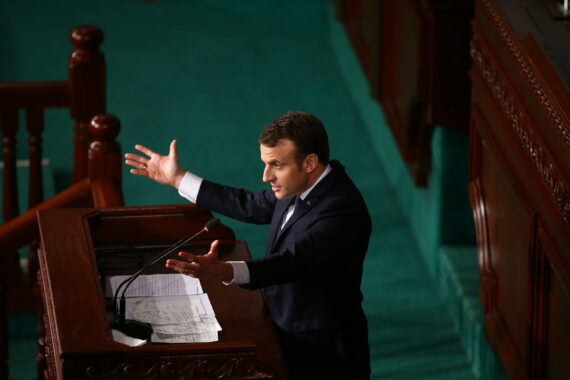 On March 29, French President Emmanuel Macron met with leaders of the Syrian Democratic Forces (SDF) in Élysée Palace. Following the meeting, Le Figaro first reported that France is sending troops to northern Syria, and then re-wrote the caption that France might send troops – referring to members of the SDF as source for the news. A day before this happened, U.S. President Donald Trump announced that U.S. troops will retreat from Syria. This was followed by a telephone conversion between Trump and his French counterpart, and increasing cooperation with Turkey. Combined with statements made by the YPG, recent developments have made it seem that France will take the place of the U.S. if the latter retreats from the region.

Élysée Palace refuted the claims with the statement that France will send reinforcement units to Manbij. However, the statement also touched upon the target of reaching “stability,” particularly in the secure zone located in northeastern Syria within the framework of an inclusive and balanced order. This might implicate France’s possibility of coming up with an administration model for the Syrian Kurds living in the region nearby the Syria-Turkey border in case Manbij is included in Turkey’s field of control. Élysée Palace also announced that they hope to see the establishment of dialogue between the SDF and Turkey with the support of the international community.

Turkish President Recep Tayyip Erdogan reminded that his French counterpart remarked similar opinions during their one-on-one meeting and added: “We are deeply sorry about the latest statements coming from France, which we find wrong and hope to have stemmed from a misunderstanding. Those hosting the terror group members in a top-level office must know that this only means an antagonistic move against Turkey.”

The latest statements are far from being peculiar when considering the record of France in Syria, as the country has engaged in many atrocities in the Middle East. When France and the U.K. divided Arab territories into mandate governments according to the Sykes-Picot Agreement, France had Syria. Although the reports made after the Macron-SDF meeting were refuted, they still evoked memories of the French military’s invasion of Damascus 97 years ago. During France’s 20-year mandate government in Syria, the foundations of Syria’s future were laid. The mandate government divided the country into six regions and founded the “Special Forces of the Levant.” Comprising mostly of Nusayri and Druze soldiers, the Special Forces then formed the grounds of the Syrian Army. It is argued that the Nusayris gained dominance in the state despite being a minority group due to this ground laid by the French.

In 1970, Hafez al-Assad came to power by staging a military coup. In Syria, where more than 70 percent of the population is Sunni, the minority Nusayris ruled the country with the Baath regime, which is a peculiar combination of Arab nationalism and Soviet socialism. The French government and the Assad family always acted in favor of each other. Regardless of whoever came to power in France, this situation never changed. For instance, when Hafez committed the 1982 Hama massacre, socialist president François Mitterrand was serving his first term in Élysée, but he did not even issue a single condemnation to Assad. More, Hafez’s brother Rifaat al-Assad, the commanding officer allegedly responsible for the Hama massacre, moved to Paris after having tension with his older brother, and allegedly engaged in embezzlement and money laundering. He spent a serious amount on financing Channel Tunnel and received his residence permit thanks to that.

Republican President Jacques Chirac also displayed red-carpet treatment to Assad, who made his first visit abroad to Paris in 1998 after 30 years. In 1999, Chirac hosted Bashar al-Assad in Élysée before he had any official status. He was also the only western leader that attended the father Assad’s funeral one year later. Throughout all these decades, France has never shown any concern about the situation of Syrian Kurds, whom Assad deprived of citizenship. Plus, the country always supported Saddam Hussein, the perpetrator of the 1988 Halabja massacre. While Turkey opened its border gates after the Halabja massacre, France only accepted 500 Kurdish refugees. A French diplomat friend of mine was surprised at the fact that Turkey opened its borders without pursuing any form of screening. When I asked him how the French authorities selected people, he pointed to his teeth and said, “they look at their teeth.”

Although relations between Paris and Damascus hit a low after the assassination of Lebanese Prime Minister Rafic Hariri, who was Chirac’s close friend, Chirac’s successor Nicolas Sarkozy restored relations between the two countries. He hosted Bashar Assad three times while Assad paid return visits. However, the Arab Spring changed the course of events, as France could not foresee the phenomenon that started in Tunisia, where the Ben Ali dictatorship favored by France was overthrown. It can be contended that France showed such a hasty demeanor in Syria for this reason. The country favors dictatorial regimes, but as soon as their decline becomes obvious, it starts to criticize the same regimes. The statements issued by Élysée Palace regarding the Macron-SDF meeting stressed the male and female parity within the delegation. But they did not touch on the fact that many international NGOs issued various reports indicating that the YPG and PKK terror groups, which adopt an ideology with Stalinist and fascist elements, armed 10-year-old children and made 15-16 year-old children organize kamikaze attacks.