If Russia becomes a pariah state, the country faces the risk of becoming a supplicant rather than a potential partner of China. 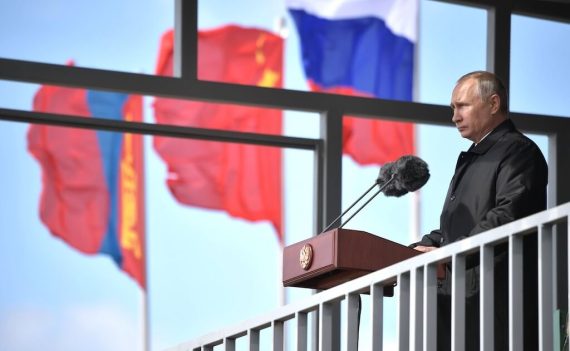 Russia's President Vladimir Putin attends a parade of army hardware and aviation involved in the main stage of a military exercises held jointly by the Russian Armed Forces and the Chinese People's Liberation Army at the Tsugol range in Transbaikal Territory, Russia on September 13, 2018. Photo by Russian Presidential, Anadolu Images

After the Russian military invasion of Ukraine, the West has unanimously slapped severe sanctions on Moscow that, at the moment, have further raised energy and commodity prices in the international market. This is due to the fact that Russia covers one third of the world’s gas supply needs using pipe gas.

China’s stand and role in the Russia-Ukraine conflict is key for the larger Russia-West conflict, and will set the tone for the U.S.-China competition in the emerging global order. China has all the tools in its armory to gain maximum benefit from this conflict.

China is already Russia’s largest trading partner and sanctions-hit Russia will sell its oil, gas, and other natural resources to the Chinese market using the Chinese alternative to SWIFT, the Cross-Border Interbank Payment System, or CIPS. Central Asian states, Belarus, and a few other countries can’t survive without financial transactions with Russia. This will give China’s CIPS a great opening to enter into large global financial transactions.

Shutting Russia off from the SWIFT payment system may help China’s efforts to advance an already established alternative to SWIFT. Strict Western sanctions on Russia and the expulsion from the SWIFT system of international financial transactions will force Russia to adopt the Chinese alternative to SWIFT. The Russian invasion of Ukraine and strict Western sanctions on Moscow will undoubtedly increase Chinese clout in the global order.

A new Chinese option could allow Russia to conduct the majority of its trade in yuan rather than US dollars. CIPS, which was established in 2015, will receive a much-needed boost. In principle, there is no reason why CIPS cannot be used in the place of SWIFT. And if Russia successfully transitions its trade payments away from the dollar system, American prestige and power would suffer greatly.

Russia may also demand all payments for Russian goods be paid through SPFS, which is Russia’s SWIFT alternative. Cutting off Russia from SWIFT won’t do the damage it did to Iran. Russia and China saw how SWIFT was being used as a sanctions weapon and developed their own SWIFT alternatives.

After SWIFT was cut off, the world won’t stop trading with Russia; companies will switch to alternative systems. Given China’s economic might and the massive volume of its international transactions, CIPS has a far better chance of becoming an alternative to SWIFT than the Russian SPFS.

SWIFT handles $800bn in Russia per year. The reason SWIFT was not cut off initially was because Germany wanted to figure out how to pay Russia’s gas bills. It makes no difference how much volume SWIFT handles. As long as all Russian payments are cleared, the volume of the payment system is irrelevant. If foreign companies are forced to use CIPS and SPFS, it will erode the complete monopoly of SWIFT and the financial sanctions will become toothless.

The Risk of Losing a Monopoly

If foreign companies are forced to use SPFS and CIPS, SWIFT’s entire monopoly will be destroyed, and financial sanctions will lose their sting. This is why the West was initially hesitant to ratify sanctions on SWIFT. There could be a migration from SWIFT to CIPS and SPFS.

If it becomes a pariah state, Russia faces the risk of becoming a supplicant rather than a potential partner of China. Within ten years, Europe will have broken its reliance on Russian gas and oil, which has become a pressing priority in Germany and Italy. Russia will be more reliant on China, and, as a result, China will have more leverage to counter the West.

For the Russians, the two-decade-old Russia-China “Treaty of Good Neighbourliness, Friendship, and Cooperation” will be crucial. During the recent Putin-Xi meeting, it was agreed that China will continue to buy Russian oil and gas.

That is, if a difficulty arises in Russia’s European market, the next buyer is ready to step in. During the meeting, Russia’s Gazprom and China’s CNPC agreed to supply gas through a new route for the next 25 years. By 2025, the “Power of Siberia” pipeline, which began operations in 2019, will be fully operational.

China, for its part, has begun to reposition itself in relation to the United States. The United States may be able to encircle Russia near its border and as a result, the United States’ efforts to contain China through its Indo-Pacific strategy, may be hampered.

With the war in Ukraine, the yuan has been traded as a safe haven currency. Prospects for more easing in China should see China’s growth rebound, keeping Chinese stocks resilient even as U.S. equities fall. On the other hand, since the Ukraine crisis began, the euro’s attraction has been weakened due to the EU’s proximity to the conflict zone and its reliance on Russian energy imports.

The U.S. and the West have overused their sanctions and embargo playbooks. They used to work well against small countries, but not for countries like Russia that sells massive amounts of supplies to the West. On the other hand, European powers, which depend mostly on the U.S. for their security, now realize that there is no alternative to hard power.

The U.S. might succeed in bogging down Russia in Ukraine, but this in turn will give China more strength to challenge the U.S. hegemony in other parts of the world.

This is the first time since the dissolution of the Soviet Union that the United States and Europe have faced a serious challenge, and it is only conceivable because of China’s strong partnership with Russia. China abstained from voting for the Ukraine Resolution at the UNSC or the UNGA, did not designate the Russian offensive an invasion, and declined to impose sanctions on Russia. China attributed this development to the U.S. and NATO’s provocation.