How to Read Military and Trade Relations between China and Israel

Growing ties between Beijing and Tel Aviv open up more prospects for cooperation and this alarms the United States as it fears that security and military secrets might be leaked to China – its chief global rival. 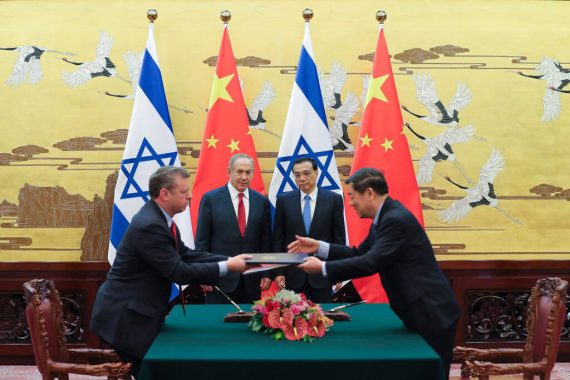 Economic relations between China and Israel are witnessing remarkable developments in recent years. A number of concluded commercial deals and signed contracts are clear evidence of the increasing imports and exports. The scope and diversity of the bilateral relations can be witnessed by a free trade agreement, China’s restoration of a number of Israeli ports, the construction of transportation tunnels in the Carmel region, the mobile phone sector, Israeli food and technology companies, and China’s bid for developing the world’s largest desalination plant in Israel – which was unsuccessful due to an American refusal.

China launched its diplomatic relations with Israel in 1992, but the economic relations were only gradually strengthened after the 2000s in the investment, tourism, and trade sectors. Israel rightly views China as an economic giant since it is the second-largest global economy while the Chinese markets attract Israeli industrialists and businesspeople, despite some difficulties such as the long geographical distance and being located in different time zones.

Out of 42 Israeli economic attachés around the world, six are in China to support Israeli businesspeople. Meanwhile, the visit of Benjamin Netanyahu, the former prime minister of Israel, to Beijing in 2017 resulted in the signing of 25 contracts worth $2 billion.

Chinese expansion into Israel comes within the framework of Chinese President Xi Jinping’s Belt and Road Initiative, under which China could invest billions of U.S. dollars in commercial and economic projects such as expanding the Israeli ports of Haifa and Ashdod, digging tunnels in the Carmel Mountains in Haifa, constructing the Tel Aviv light rail line, and building housing and civil towers.

China is the third-largest destination for Israeli exports after the United States and Britain, with a value of $4.7 billion.

Since the establishment of diplomatic relations in 1992, trade volume between China and Israel has grown every year. China is the third-largest destination for Israeli exports after the United States and Britain, with a value of $4.7 billion. The most important commodities exported are cars, electronics, and chemical and medical products as well as optical equipment. Israel’s imports from China are second only to those from the United States, with imports of $11.4 billion in a variety of industries including electronics, textiles, toys, furniture, metals, chemicals, and a variety of consumer goods.

The Israeli Innovation Conference in 2017 broadened the scope of economic and technological cooperation between Tel Aviv and Beijing, which extended to universities, unions, and private companies, and tens of thousands of participants can now annually visit Israel to learn about new innovations. Israel’s technological capabilities are of interest to China, which invests a large amount of its resources in adopting technologies from around the world. Israel’s technological developments in software, agriculture, health, automobiles, water resource management, and manufacturing have become the focus of many Chinese companies.

Multifaceted partnerships have been formed between China and Israel in technology, trade, services, investments, and commercial tourism as well as the organization of dozens of events, receiving delegations of commercial establishments on a yearly basis, and establishing contacts with giant Chinese companies.

Recent years have witnessed a growth in the influence of the Chinese financial and business sector inside Israel, including infrastructure projects, where as many as three Chinese delegations could arrive in Israel in a single week. This means that we are in a new era of bilateral relations, and that there is a serious desire from Beijing to strengthen its ties with Tel Aviv. This is true at least in the commercial and economic sectors, in light of Israel’s technological capabilities and the potential benefit for China.

Israelis believe that Chinese companies are mainly involved in strategic infrastructure projects in Israel. China, on the other hand, is particularly interested in benefiting from Israel in the field of agricultural research, where Israel has advanced expertise and can aid China in helping supply global food chains through the use of contemporary technology. In recent years, Chinese technology figures, businesspeople, and government officials have visited Israel and set up branches there.

Police officers inspect the residence of China's embassy after China’s ambassador to Israel Du Wei, 58, was found dead in his home in Herzliya, Israel on May 17, 2020. Photo by Nir Keidar. Anadolu Images.

High-level Chinese delegations have been visiting Israel in recent years, considering this a new breakthrough in the country’s international relations. Israel is interested in the Chinese sectors of agriculture, medicine, and technology, and has already learnt from China in the field of facial recognition, and in many other fields for bilateral cooperation.

In terms of internal trade, Israeli data reveals that 463 investment deals were signed between Israeli and Chinese companies between 2001 and 2020, and China became Israel’s second-largest trading partner after the United States. In 2001, the volume of trade between China and Israel amounted to $1.07 billion; in 2018, this reached $11.6 billion; and in 2019, the figure decreased slightly to $11.2 billion.

At the industrial level, China is Israel’s second-largest trading partner. In the field of infrastructure, the Chinese company SIPG won a bid to expand the port of Haifa in northern Israel in 2018, and another bid to establish a new port in Ashdod in the south, in the next 25 years. The Ashdod port is expected to improve maritime transport and supply lines from and to Israel, and reduce the waiting time compared to the old ports in the region. All in all, this will provide Israel with more economic gains.

Read: Israel’s Mass Surveillance of Palestinians Is More Than an Obsession

Although Chinese investments have not yet exceeded 10% of the total foreign capital in Israel, the country has won large bids for its transportation infrastructure, has started bidding for water and electricity infrastructure projects, and has submitted a bid to build the new light rail lines in Tel Aviv worth billions of U.S. dollars. Since 2010, Hutchison Whampoa Limited has worked on the light rail line in Tel Aviv with an estimated budget of $500 million.

Chinese delegations visit Israel to learn more about its water desalination technologies as Israel is considered one of the world’s most advanced countries in desalination.

In water desalination, the Chinese company Hutchison has entered into a tender to build the SWRO II facility, planned to be the world’s largest desalination plant on the Mediterranean coast in southern Israel. The plant produces 200 million cubic meters of drinking water annually, which raises the total water treated by Israeli desalination plants to 786 million cubic meters annually – or 85% of its total annual domestic consumption. The value of the bid is $1.5 billion, and the winning company will manage the facility for 25 years.

China has been following the Israeli water market for the last decade. Chinese delegations visit Israel to learn more about its water desalination technologies as Israel is considered one of the world’s most advanced countries in desalination. The Chinse-run plant treats 200 million cubic meters of water annually, which increases Israel’s desalination capacity of water to 35%. The plant is the sixth one to be operated by China in the country.

When talking about technology and innovation, the joint ventures of China and Israel are based on the notion of supply and demand. The Israeli government sent a delegation to visit Beijing in March 2017 to learn about Chinese technologies. The relationship between Israel and China continues at various levels of government, universities, unions, and private companies that send tens of thousands of participants annually to learn about Israeli innovation.

Apart from agricultural research, China is the third-biggest investor in Israeli high-tech companies. China has advanced expertise worldwide, and can feed the global food supply chain through the use of contemporary technology.

The main Israeli export to China (51%) is electronic components, while Intel is responsible for 80% of exports, including chips made in Israel and sent to China for inspection and assembly. There are three other major and growing industries: industrial measurement, control equipment, and chemical and medical equipment.

China now considers Israel an attractive investment destination, whether in technology or infrastructure, and its investment in infrastructure in Israel is due to its knowledge, techniques, expertise and capital required to compete successfully in winning bids.

Israeli startups raised $325 million from Chinese investors in 2018, compared to $76 million in 2013, and Chinese investments aim to benefit from Israeli knowledge in the areas of artificial intelligence, advanced computing, autonomous vehicles, robotics, and data science. With regard to the increase in Chinese tourism in Israel, Israeli companies have recently focused on attracting more Chinese tourists, and the Israeli Ministry of Tourism has even opened a second office in Shanghai, following the one in Beijing. The ministry is working to market Israeli tourist sites to the Chinese, as tens of thousands of Chinese arrive in Israel to participate in sales and fairs.

Israeli economic circles place China among one of the country’s most important tourism targets. In 2018, a record number of four million tourists arrived in Israel, of whom only 105,000 were Chinese. In 2019, the number of Chinese tourists reached 150,000 – an increase of 50%. The duration of their stay in Israel ranges between 5 and 13 days; most of them come through tourist groups, specifically from Beijing, Shanghai, and Chengdu, the three largest Chinese cities; and the majority are under the age of 40. Each Chinse tourist in Israel spends an average of $230 a day, which makes the Israeli economy place great hope on Chinese tourism. Tourists buy Dead Sea products, jewelry, and wine.

The Israeli Ministry of Tourism has decided to put Chinese tourism, which has only recently been on its radar, at the top of its priorities. The United States is behind 23% of the Israeli tourism market, and is the country’s number one tourism contributor. The Chinese tourist market is in seventh place, but, at the moment, it ranks first in importance.

Stemming from their technological capabilities and technical innovations, all the above speak of the strengthening trade and economic relations between China and Israel in recent years. China is the second-largest economy globally, and although the political cultures of China and Israel are different, the vast Chinese market attracts many Israeli industrialists and businesspeople.

At the same time, the development of trade and economic investments between Beijing and Tel Aviv open up more prospects for cooperation and coordination. However, this does not necessarily mean an increase in political relations as the latter face a clear American opposition. Ultimately, the U.S. fears that security and military secrets might be leaked to China – its chief global rival.

Adnan Abu Amer is a professor of political science and media, and expert on Israeli affairs. He has translated and authored more than 30 books on Israeli affairs, and periodically writes for many think tanks, websites, and newspapers.