The prospect of an increased U.S. air-naval presence at the heart of Southeast Asia underscores to Beijing the vulnerability of its SLOCSs. 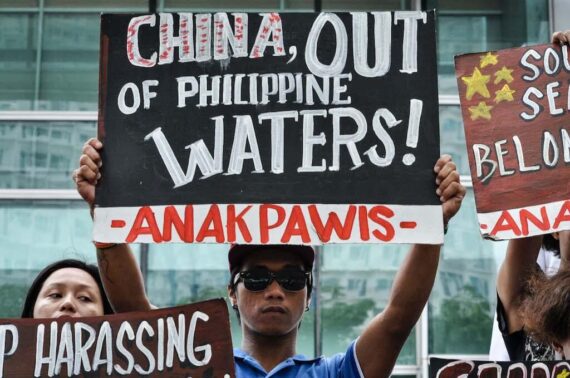 Filipino activists hold anti-China placards as they attend a protest rally in front of the Chinese consulate in Manila, Philippines on June 04, 2015. Filipino activists joined the protest demanding China to stop the claim and massive reclamation in the South China Sea. Photo by John Jerome E. Ganzon. Anadolu Agency.

Wary of China’s demographic preponderance, powerful economy and rapidly advancing modernizing air and naval power projection capabilities, the U.S. has concluded that the emerging Cold War-like confrontation with Beijing presents different challenges from its confrontation with the Soviet Union during the second half of the 20th century, hence requiring differing policy prescriptions.

This backdrop has seen the U.S. increasing its diplomatic and security cooperation arrangements with its existing partners in the Indo-Pacific – in particular, Japan, the Republic of Korea, Singapore and Australia – along with rapid expansion of security cooperation arrangements with India. Notably, Japan, Australia and India are linked to the U.S. under the Quadrilateral Security Dialogue, or Quad, for short.

The U.S. has begun to seek more diplomatic and security partners in the western Pacific. Washington’s new partners include Indonesia. In October 2020, Secretary of State Mike Pompeo arrived in Jakarta to pledge U.S. cooperation with Indonesia to ensure regional maritime security. Growing U.S.-Indonesian cooperation has been carried over with the transition to the Biden Administration, with U.S. funding for the construction of a maritime training centre in Batam Island.

A two-fold perspective underscores the mutual interests and logic behind U.S.-Indonesia rapprochement. The first of these concerns the geostrategic setting of Sino-U.S. rivalry. The Indonesian islands are located close to the Sea Lines of Communication (SLOCs) that connect the Indian Ocean to the South China Sea; this is further underscored by the location of three key maritime chokepoints: the Malacca Straits; the Sunda Strait; and the Lombok Strait.

Ensuring continued access to these chokepoints is a critical concern for China, given the extent to which Beijing is dependent on these SLOCs for its oil imports from the Middle East and East Africa, as well as its exports of consumer goods to Europe.

Beijing is fully aware that, in the event of heightened confrontation with the U.S., Washington is likely to seize the initiative to severe these SLOCs and thus starve China’s energy-dependent economy into submission

Beijing is fully aware that, in the event of heightened confrontation with the U.S., Washington is likely to seize the initiative to severe these SLOCs and thus starve China’s energy-dependent economy into submission. In particular, the Chinese Communist Party (CCP) is aware that its domestic legitimacy is dependent on ensuring employment for its populace; by extension, any development that undermines China’s economy bodes the prospect of civil unrest and discontent that would be aimed at the CCP.

The CCP’s sense of vulnerability over these SLOCs is further accentuated by its limited air-naval power projection capabilities. Although China has joined the club of great powers with aircraft carriers and stealth fighter aircraft, its ability to seriously challenge the U.S. and its Quad partners beyond the South China Sea remains limited. Apart from China’s artificial islands in the South China Sea – whose lack of strategic depth renders them vulnerable to a U.S.-led amphibious assault – the only air and naval bases that China has been able to acquire in the Indian Ocean region are in Djibouti, and in Great Coco Island, Myanmar.

Set against this, the prospect of an increased U.S. air-naval presence at the heart of Southeast Asia underscores to Beijing the vulnerability of its SLOCSs. The U.S. already enjoys access to Singapore’s air and naval bases, which are capable of hosting up to two U.S. aircraft carrier battle groups. Nonetheless, U.S. options for expanding its military footprint in Singapore are limited by the scarcity of land in the city-state.

U.S. options for expanding its military footprint in Singapore are limited by the scarcity of land in the city-state.

In contrast, sparsely-populated, under-developed Batam offers significant tracts of land that offer potential expansion of military infrastructure to host a scaled-up U.S. air-naval presence in Southeast Asia that would be capable of interdicting the SLOCs that China is dependent on, even as the PRC’s air-naval power projection capabilities remain well behind the U.S.

A second, further rationale to the Indonesia-U.S. rapprochement concerns the technical aspects of the efforts of the Indonesian National Armed Forces – the Tentara Nasional Indonesia (TNI) – to modernize in the face of growing Chinese assertiveness in claiming the waters and islets within the ‘Nine-Dash Line’, which abut Indonesia’s Natuna Island. China’s modernization of its air and naval power projection capabilities underscore Beijing’s increased capacity to present the Southeast Asian with the fait accompli of Chinese control of the South China Sea.

Set against this, the TNI’s readiness to respond is limited. The Indonesian Army has traditionally held pride of place in Jakarta’s procurement programs, thence leaving the country’s Air Force and Navy equipped with obsolete, poorly-maintained platforms, a weakness underscored by the loss of the submarine Nanggala during a training exercise in April 2021. In response to China’s air and naval modernization, the TNI has switched its procurement priorities accordingly, with contracts for the acquisition of Korea-built Boramae stealth fighters, Japanese-built Mogami-class and Italian-built FREMM-class stealth frigates.

Jakarta has also announced plans to acquire upgraded variants of the U.S.-built F-15-EX fighter. Such acquisitions come as a timely response to China’s increased assertiveness in the South China Sea that signals Jakarta’s resolve not to be intimidated by China. However, their belated procurement, coming after decades of the Indonesian Government’s neglect of its air and naval capabilities, underscores the prospect of a steep learning curve for Indonesia’s pilots and sailors.

These new platforms are among the latest designs of their type in the world, and whose effectiveness is bound by the information-based Revolution in Military Affairs (RMA). Mastery of these platforms as part of a ‘system of systems’ will not be merely a case of retraining personnel to operate more advanced aircraft and warships; rather, it will place more emphasis on the ability of personnel to rapidly process combat information from a wide array of sensors for accurate targeting under wartime conditions requires a fundamental shift in training, doctrine and manpower organization. Such a level of military modernization would effectively require a paradigm shift in Indonesia’s war-fighting doctrine, requiring the TNI to make the transition from a 1980s-styled military to a 21st-century one at very short notice.

Within such a setting, the establishment of a U.S.-Indonesian maritime training centre offers both sides a win-win arrangement for their respective military interests vis-à-vis China. For Washington, the training centre provides the U.S. military with the foundation to establish an alliance with a demographically large, but technically backward, regional power in Southeast Asia.

Over time, such a partnership would provide Washington with a strong bulwark to further contain China’s ambitions, and add an additional layer to the existing, implicit U.S. access to Southeast Asia via Singapore. Concurrently, the TNI would benefit from being able to train alongside the U.S. military, thence enabling it to leapfrog past decades of technical backwardness and accelerate its drive to enhance its air and naval capabilities to counter China’s growing assertiveness.

That being said, whilst the U.S.-Indonesian rapprochement comes as a welcome response to China’s assertiveness, it would be necessary for the U.S. to tread lightly to avoid antagonizing local sensitivities. In particular, there is considerable hostility in Indonesia towards the U.S. over Washington’s support for Israel. Seen in this light, U.S. efforts to broker peace between Israel and Palestine will go a long way in assuaging grassroots Indonesian hostility to the U.S.