While some parties followed a more transparent method and informed the public at every stage of their parliamentary candidacy process, some contrarily held the process behind closed doors. Thus, before the announcement of the final lists, it is important to evaluate the parties’ candidate selection process in detail. 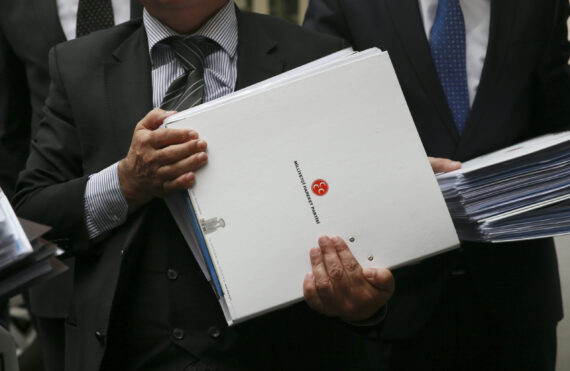 The list of parliamentary candidates that the MHP submitted to the YSK, 18 May, 2018. Anadolu Agency

With only one month left until election day, the political parties are about to finalize candidacy lists for Parliament. Because the parties follow different strategies in determining their candidates, each of them carried out the procedure differently. While some parties followed a more transparent method and informed the public at every stage, some contrarily held the process behind closed doors. Thus, before the announcement of the final lists, it is important to evaluate the parties’ candidate selection process in detail.

7343 people applied to the AK Party to become candidates for Parliament and the party approved the application of 7039. As part of the selection process, the AK Party established fourteen commissions in the party to conduct pre-interviews with all of these candidates. After the first round had been completed, the party conducted the second round of interviews of 2100 candidates qualified for this round. Meanwhile, as one of the strategies the AK Party introduced to Turkish political life, the party held popularity polls among rural party authorities and provincial members in 81 provinces to measure the tendency of people towards the possible candidates. It was announced that the results of these popularity polls would be evaluated seriously in the process of finalizing the lists. The party also conducted a security clearance to prevent the possibility of infiltration by illegal groups.

It is understood from the speeches of the leading figures of the party that the party will make significant changes in its parliamentary cadres. President Erdogan many times stressed that the party needs more dynamic and rejuvenated cadres. As a result of this situation, it is highly possible for the party to finalize the list combining both familiar and new names. Most probably, some of the party’s 294 out of 316 current parliament members who re-applied will find a place on the list.

The MHP released its list of parliamentary candidates last week before submitting it to the Supreme Electoral Council of Turkey (YSK). The party approved the application of 1726 out of 1815 people due to affiliations of illegal organizations and violent acts. Like the AK Party, the MHP also conducted a security clearance among these people. The party’s final candidate list includes 79 female and some prominent names currently serving as members of parliament. Nonetheless, some of the current parliamentary members were excluded from the party’s lists. This exclusion was seen as a result of the party’s efforts to rejuvenate its candidacy list compared to the previous terms.

The main opposition party CHP finalized its candidacy lists to submit to the YSK. The party’s candidate selection process was less transparent compared to the previous terms. While in the previous terms the party was conducting large-scale popularity polls in almost half of the provinces, the party just conducted small-scale surveys this term by asking about possible candidates to some of the rural party authorities. The party conducted interviews with 2139 candidates who applied and the final list will be determined by the party’s 60-seat assembly (PM) responsible for making decisions on the policy and strategy for the party.

The other parties running in the elections could not conduct a transparent candidate determination process compared to these three parties. They did not inform the public regularly about the stages of the process. Whether or not they provide transparency in the process, all of the parties running in the elections are submitting their final lists to the YSK today. Parties will organize the candidate meetings by this week and accelerate their campaign process.