How Undemocratic Europe Can Be: The Examples of Germany and the Netherlands

It is becoming more and more obvious, what would happen if an EU national politician would be detained in Turkey. However, this is the destiny; they do not even deserve fundamental rights, since they are basically, the Bad Ones. 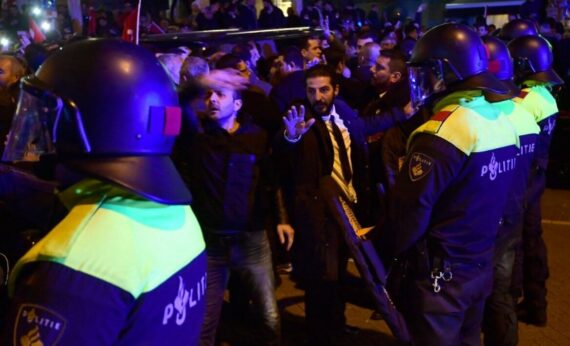 We Are the Good Ones is a book written by Schreyer and Broeckers on how mainstream media in Europe and in the West in general tried to demoralise Russia during the crisis in Ukraine. Any steps by Russians or pro-Russian groups in Ukraine were seen as unjust, illegal, inhuman and anti-Western per-se. Although there was a previous rapprochement between Russia and Europe in the fields of counterterrorism, natural gas trade cooperation and others, just one conflict on interests turned Russia into an “other” for Europe.

There are two steps involved in making a bogyman out of someone. Firstly, in our case, it starts with referring to Europe’s unquestionable and essentialist attitudes of being good per nature. Europeans and Westerners in general are always the good guys, those who do not do anything bad. Since they have the self-vision of being cultivated, founders of liberal democracy and forerunners of all modern achievements in the world, their awareness of the self is simply being the good, independent of which kind of stance they have or what their actions are, while the rest does not really matter at all.

The Case of Turkey

The referendum on the 16h April of this year is a plebiscite on reforms to Turkey’s constitution. Shortly, citizens of the Republic of Turkey will decide on whether they want to change Turkey’s executive to a presidential democratic order or to remain in the present form of governance. Since 1.5 million Turkish citizens residing in Germany, along with hundreds of thousands living in mainly Western European states, will participate in the referendum and politicians from different factions are extending their campaigns into these countries. Whereas in every European country politicians and private persons can campaign for a ‘No’, this has not been the same for anyone campaigning for a ‘Yes’. A trend starting with the cancellation of the conference, which was to be given by the Minister of Justice, Bekir Bozdag, has continued, with further meetings legally registered but cancelled due to arbitrary procedures.

After the cancelation of meetings of the Minister of Justice, a few days later meetings of the Minister for Foreign Affairs, Mevlüt Çavuşoğlu, have been cancelled as well. Although the argument was made by German public servants that political campaigning by foreign politicians is not a fundamental right; this was not the case for others. For instance, the Leftist Party (die Linke) and the Greens (die Grüne), the third and fourth largest parties represented in the German parliament, are officially campaigning for a ‘No’’ which illustrates the political stances of political parties actively involving in foreign campaigns. The irony is between the prohibitions of politicians campaigning for their political agenda related to their own country to their own citizens living abroad and free activity of political parties campaigning for a foreign concern, in their own countries but to people who they consider foreigners.

The same case can be observed in the Netherlands, where Prime Minister Rutte declared he would not allow any meetings of ministers of Turkey in the Netherlands, yet the previous deputy minister of Turkey, Abdullatif Şener, actively campaigns for a ‘No’ and meets Turkish citizens living there.

Indeed, it is another aspect of the psychology of the Good Ones to characterize anyone who is an ally as also being good, regardless of their actions. Therefore, their agenda and raison d’être is legitimized and should not be questioned. It is, in other words, the illustration of how and why European politicians, public servants and journalists are applying double standards without even recognizing and comprehending it. It is sometimes an act springing from unconscious attitudes towards certain ideas, persons and topics. Indeed, a pro-PKK demonstration in Frankfurt on 20 March is therefore possible, although the PKK is officially recognized as a terror organization by Germany.

The events over the night of 11 March 2017 have their roots in this essentialist, prejudicial and arbitrary actions as well. However, it is not just rooted in an unconscious act but there is a certain agenda behind it. Speaking for the Dutch case, there have been General Elections on 15 March and the right-wing Populist Party leader Wilders was leading in the polls. Rutte, the current Prime Minister, has evidently misused his office as a prime minister to catch up with Wilders’ votes and to have a chance for a further re-election, which he in the end won as the primary party.

In other words, his means were values like liberal democracy, ideas like freedom of expression and assembly, and further characteristics on their proclaimed liberal democracy for not losing his office, and his power. Therefore, a bad person named Erdogan is always useful for being a good person named Rutte, Wilders, Schulz or good girls like Le Pen or Merkel. It is becoming more and more obvious, what would happen if an EU national politician would be detained in Turkey. However, this is the destiny; they do not even deserve fundamental rights, since they are basically, the Bad Ones.