The far-right in Germany: stronger than ever

This now means that Merkel’s new real opposition is the far-right. 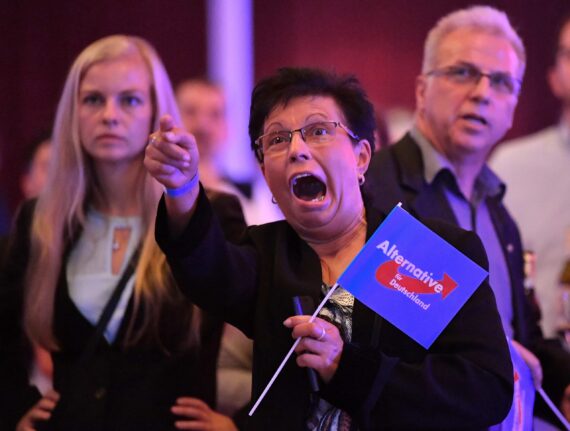 Supporters of the Alternative for Germany (AfD) react after exit poll results were broadcasted on public television at an election night event in Erfurt, eastern Germany during the general election on September 24, 2017. AFP

While Germany’s Angela Merkel has secured a fourth term as Chancellor after Sunday’s election for a new Bundestag (the federal Parliament), her authority has undoubtedly diminished. The radical rightwing AfD has entered Parliament as the third-largest party, institutionalizing the rise of far-right ideology in Germany.

Merkel’s conservative block gained 32.9 percent of the vote, a decrease of 8.6 percent since the 2013 elections. The social democrats have also decreased their vote by 5.2 percent, leaving them with 20.5 percent of the vote. While the CDU/CSU secured 34.7 percent of seats in Parliament, the SPD remained at 21.6.

In analyzing the results and the decline of the two major blocs, it can be stated that the vote has been shared between the FDP, who are pro-business, and who increased its vote by 6 percent. However, the real deal is the fact that AfD entered Parliament with 12.6 percent of the general vote, securing 87 seats in Parliament.

This now means that Merkel’s new real opposition is the far-right.

With its increase of the national vote and seats in Parliament, hundreds of protestors gathered in the cities of Berlin, Hamburg and Frankfurt to show opposition to the hard-right party.

The protestors gathered at Berlin’s Alexanderplatz on Sunday, near a victory party for AfD and chanted slogans including “racism is not an alternative,” “AfD is a bunch of racists” and “Nazis out!”

“The whole of Berlin hates the AfD!” was also heard at the protest.

Riot police were alarmed and ensured to prevent the protestors from approaching the building where the AfD victory party was being held.

Considering the fact that Germany is home to 3 million Turks, the current under-representation in the new German Parliament raises questions regarding ethnic representation.

Only 14 lawmakers with a Turkish background have been elected to the 709-seat Bundestag, where the AfD have become the third largest group.

While the CDU/CSU and FDP have no Turkish members, the SPD has managed to draw the largest number of lawmakers from the Turkish community.

Ahead of the elections, the Turkish Community in Germany (TGD) association called on political parties to take measures, including setting quotas, in order to increase the representation of citizens with an immigrant background in the Bundestag.