How will Turkey carry out its Military Campaign beyond Afrin?

One way or another, it is clear that Turkey's military-political victory will provide more opportunities for strategic manoeuvres in Ankara’s next military move, particularly towards its ongoing military campaign against the PKK in northern Syria. 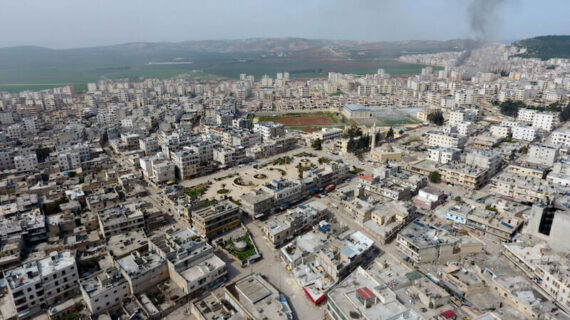 On the 58th day of the military campaign Operation Olive Branch, Turkey declared its victory against the PKK/YPG in Afrin. Following the collapse of the PKK’s defense strategy and its unexpected isolation within the geopolitical struggle, the city is now under full control of the Turkish Armed Forces and the TAF-backed Free Syrian Army. One way or another, it is clear that this military-political victory of Turkey will provide more opportunities for strategic manoeuvres in Ankara’s next military move, particularly towards its ongoing military campaign against the PKK in northern Syria. Upon the liberation of Afrin city, with the surprisingly little resistance by the PKK, Turkey is now reconsidering its military and political options to minimize the PKK’s role in the midterm, and de-territorialize the PKK and YPG in Syria and Iraq.

Speaking in Ankara, a day after the TAF and Free Syrian Army cleared Afrin, President Erdogan vowed to further Turkey’s fight against terrorism beyond Afrin. In his speech, Erdogan said: “We have eliminated most of the terror corridors in the region,” and “we will continue this process until we entirely eliminate this corridor that includes Manbij, Qamisli, Ayn al Arab (also known as Kobani) and Rasuylayn.” President Erdogan also underlined that Turkey’s next military move will take place in Manbij – a region that is still under the control of the U.S.-backed PKK/YPG forces. Following the visit of former U.S. Secretary of State Rex Tillerson to Turkey to negotiate about the PKK issue in Manbij, Turkey’s foreign minister Cavusoglu expressed that the YPG will hand over the governance of Manbij to the Turkey-led Free Syrian Army in the presence of the U.S. military units there. However, after Trump’s unexpected Pompeo move, as the new Secretary of State, Cavusoglu made a minor revision in his early announcement about the agreement with Tillerson over the issue of Manbij. Cavusoglu stated that Turkey and the U.S. have not reached an “agreement,” but a common “understanding” regarding the issue of the U.S.-PKK alliance in Syria. At this stage, there is still an ambiguity regarding the position of the new State Secretary in negotiations with Turkey.

While the U.S. administration’s stance towards Turkey remains unclear, President Erdogan said that Turkey would also continue its fight against the PKK in Sinjar, a region that has been controlled by the PKK since 2014. Now, the foreign and security policy circles in Ankara are speculating how Turkey will carry out its military campaign against the PKK in Iraq. Turkey sees Sinjar just as strategically important as Afrin and other PKK-controlled regions. The geographical proximity of Sinjar to Turkey, and the role of Sinjar as a hub between Qandil and northern Syria threatens Turkey’s national security, and provides the PKK with more space to freely mobilize its militants and military equipment. It is crucial to note that the PKK’s presence in Sinjar threatens Iraq’s territorial integrity as well as the political stability of northern Iraq.

The strategic rationality behind Turkey’s move against the PKK in Sinjar is very simple. Turkey believes that the PKK’s presence in Sinjar does not meet with the regional geopolitical expectations, similar to the PKK experience in Afrin. Turkey and Iraq recently reached a tacit agreement over the PKK issue in northern Iraq. Iran seems to share a similar perspective regarding the PKK presence in northern Syria and Iraq. The KRG’s independence referendum showed how an intra-regional competition turned into an ad hoc realistic alliance in the presence of a common threat. Therefore, it is possible to claim that the PKK lacks an intra-regional support in maintaining its political and military presence in Sinjar. More critically, the PKK does not benefit from the U.S. air protection in Sinjar. Thus, the security and foreign policy centers in Ankara believe that the PKK will be isolated if Turkey decides to intervene against the PKK in Sinjar.

However, this does not necessarily mean that Turkey will take unilateral action against the PKK in Iraq. There are three alternative scenarios that should be taken into consideration. First and foremost, Turkey will try to evacuate the PKK from Sinjar by encouraging the Iraqi central government to take military action. Secondly, Turkey and Iraq will take a joint military action against the PKK together, if the PKK does not peacefully hand over the city. The recent visit of Hulisi Akar, Turkish Chief of General Staff, was the first step in convincing Iraq to take military action against the PKK. After his visit, the two countries underlined the importance of commonality in the fight against terrorism. The third and yet undesired option is part of Turkey’s ongoing military activism in the region against the PKK. At domestic, regional and international levels, Turkey benefits from its trans-frontier military initiatives as the active use of military forces provide a strategic superiority for Turkey to contain security threats and strengthen its diplomatic relations. The launch of Operation Olive Branch is a good example in understanding how the use of power consolidates Turkey’s diplomatic efforts on regional and international scales.

Articulated as such, according to the third option, Turkey is likely to act unilaterally against the PKK in Sinjar. Many in the governmental circles believe that Turkey might also use its new proxy forces against the PKK in Iraq. It is fair to conclude that Turkey wants to secure its borders, and also its regional strategic priorities. The use of military power will be part of this strategy in the future until Syria and Iraq reach a level of sustainable stability and security. The regional dynamics, as well as the new trends in Turkish security and foreign policy, enables Turkey to carry out its military campaign beyond Afrin.