On February 5, the judges of the International Criminal Court (ICC) announced their decision that the court holds jurisdiction over war crimes and crimes against humanity committed in Palestine. 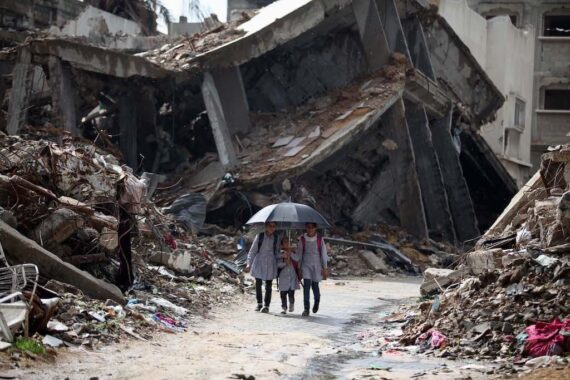 Palestinian students walk near the debris of destroyed houses which were destroyed in the Israeli airstrikes in Shujaiya neighborhood of Gaza City, on November 3, 2014. Photo by Ashraf Amra, Anadolu Images

On February 5, the judges of the International Criminal Court (ICC) announced their decision that the court holds jurisdiction over war crimes and crimes against humanity committed in Palestine. While the court did not elaborate on what steps would follow, it is expected that international criminal investigations will be commenced, and that, potentially, Israelis (and Palestinians) guilty of crimes under the Rome Statute of the International Criminal Court will be indicted and, hopefully, put on trial.

Understandably, there has been great excitement for this decision amongst human rights advocates and proponents of Palestinian rights, especially because it comes after a long period of foot-dragging on the part of the ICC. People have been disappointed before – the ICC Prosecutor repeatedly refused to investigate the Freedom Flotilla case, where Israeli commandos had forcibly stopped ships with humanitarian supplies headed for Gaza and killed ten persons in international waters.

Instead of examining the case in the context of the ongoing blockade of Gaza by Israel and the many violations inflicted upon the population of that territory, the prosecutor viewed the incident in isolation, and stated that the gravity of the violations did not reach the level required by the ICC Rome Statute.

In late 2019, on the basis of a protracted, nearly five-year-long preliminary investigation, the prosecutor stated she was “satisfied” that war crimes were being committed in Palestine. However, in recognition of the “unique and highly contested legal and factual issues” with regard to Palestine, she requested the court to ascertain whether the ICC did indeed have jurisdiction over Palestine – a move that, in the eyes of many, appeared as an attempt at passing the hot potato. Many feared another disappointment, and have been elated with the recent decision.

There is no question that the decision of the ICC is an extremely positive development. Israel and its allies in the United States and other Western countries go to great pains to present the situation in Palestine as a battle of democracy against “Islamofascist terror,” one that can only be solved by total annihilation of the enemy.

Conversely, many do-gooders in the West perceive Palestine merely as a humanitarian crisis that can be solved by development aid for poor Palestinians, or as one requiring “conflict resolution” interventions where Jews and Arabs hug each other in workshops, and all is well.

When it comes to the treatment of Palestinians, impunity permeates all levels of the Israeli political and military apparatus.

All of these narratives are, of course, false – Palestine is a human rights crisis, which is characterized by impunity for the violators of human rights. Resolution obviously requires a political solution, but eradicating impunity and punishing persons guilty of human rights violations and war crimes must be at the core. It is not only that lasting peace requires justice – justice is in and of itself a vital goal.

When it comes to the treatment of Palestinians, impunity permeates all levels of the Israeli political and military apparatus. From the lowest-ranking soldier in the Israeli Defence Forces (IDF) who shoots and kills Palestinians without justification, to the IDF general who orders the bombing of civilian homes, to the political leaders who incite genocide and instruct the building of Israeli colonies on stolen Palestinian land, the chances of being held to account have, up to this point, been practically zero.

The research of Palestinian and Israeli human rights organizations highlights this Israeli contempt for Palestinian lives. Not one Israeli soldier has been, or will be, punished for human rights violations during Operation Defensive Edge, a major Israeli offensive on the helpless people of Gaza that resulted in more than 2,250 Palestinian deaths (65 percent of whom were noncombatants, according to the UN) and extensive documentation of widespread Israeli violations of the laws of war (a handful of IDF soldiers were punished for looting during the operation).

More recently, Israeli soldiers mowed down peaceful protesters at the Great March of Return near the border fence between Gaza and Israel, killing over 230 with live ammunition over a period of 86 weeks. Not a single soldier has been punished in any serious manner. In the West Bank, the Israeli NGO Yesh Din notes that 80 percent of Palestinian complaints against Israeli soldiers are dismissed without any investigation, and only 0.7 percent eventually lead to prosecution.

And, of course, political leaders openly brag about increasing colonial settlement in the West Bank, building Jewish-only cities on Palestinian land and fortifying the openly discriminatory legal system that protects colonial settlers at the expense of Palestinian rights. The incentives for Israelis to live in the colonies are extensive, and now approximately one in 10 Jewish Israelis live there.

A stark example of the situation is the case of Elor Azaria, an IDF soldier who was caught on video executing a wounded, defenseless Palestinian in the city of Hebron. Though international pressure forced the IDF to arrest and try him, thousands of Israelis demonstrated in his support, and Prime Minister Netanyahu and other ministers demanded leniency. He was eventually released after only nine months and became a hero in many quarters of Israeli society, appearing on television as a political consultant in recent elections.

Propaganda about the “only democracy in the Middle East” aside, it is clear that Israel will not hold violators to account. Therefore, it is vital that the ICC take the necessary action to punish offenders. Make no mistake: the Israeli military and political elite is aware of the great dangers international justice poses. Unsurprisingly, Israel is not state party to the ICC, nor is the United States, but 123 countries are. Should the ICC issue indictments, every one of those states would be under a legal obligation to arrest the suspect, making travel to those countries impossible.

Though not stated in so many words, the land that was occupied (and subjected to the ethnic cleansing of Palestinians) by Zionist forces in 1948 is recognized as the sovereign territory of Israel, and is therefore not part of the equation.

High-ranking IDF officers are already issued with a special emergency number, should they be arrested while traveling abroad, and there are special teams of lawyers ready to jump to their defence. That this is all being done proves that Israel sees the writing on the wall. Do not believe the bravado of Netanyahu and others: the prospect of being hauled to court in The Hague keeps them up at night.

The shortcomings of international efforts: the injustice of the “two-state solution”

The decision of the ICC is, therefore, an important, positive step towards addressing impunity in Palestine. At the same time, it is worth pointing out that it has a serious shortcoming, namely that it covers only the portion of Palestine occupied by Israel in 1967, i.e. Gaza and the West Bank (which includes East Jerusalem). The ICC states explicitly that its jurisdiction extends only to those territories, and that it is only able to adjudicate violations that took place there.

Though not stated in so many words, the land that was occupied (and subjected to the ethnic cleansing of Palestinians) by Zionist forces in 1948 is recognized as the sovereign territory of Israel, and is therefore not part of the equation. Even though Palestinians with Israeli citizenship (‘48 Palestinians’) live under a discriminatory regime with similar rights violations as Palestinians in the 1967 lands, and even though Palestinian refugees continue to suffer the violation of their internationally recognized right to return to their homes, those issues are not looked at as relevant.

Of course, as a legal matter, the ICC is correct: the state party to the ICC is the State of Palestine as recognized by the United Nations General Assembly in 2012. Since that state is based on the Oslo framework, its territory can include only the land occupied by Israel in 1967 (a mere 22 percent of historic Palestine).

Indeed, that the right of Palestinians to self-determination is only to be recognized in territory occupied since 1967 (and, so it is suggested, no further) is stated clearly in numerous UN resolutions on the issue, including the one adopted by the General Assembly admitting Palestine as an observer state.

Herein lies the real problem with international efforts on the issue of Palestine: from the get-go, the so-called international community has de facto recognized the ethnic cleansing of 1948 and accepted the state of Israel. By doing so, it has failed to protect the rights of the Palestinian people.

UN General Assembly Resolution 181, the “Partition Resolution,” is a stark example. At the time of the resolution, Palestinians comprised approximately two-thirds of the population of Palestine, and owned approximately 93 percent of the land. Despite these undisputed facts, the UN’s great idea was to split the country and create two states, with Palestinians asked to give over half of the land to Zionist settlers who had recently arrived from Europe.

Though manifestly unjust, this “two-state solution” has been the framework for international intervention in Palestine to this day – indeed, now the Palestinians are expected to settle for even less than the Partition Plan of 1947.

As argued by UN ECSWA (in a report that was quickly disowned by the UN), all Palestinians are victimized by Israeli apartheid, not just Palestinians in Gaza and the West Bank. Though the exact form and method may differ, they are all subject to “systematic oppression … committed for the purpose of establishing and maintaining domination by one racial group,” as defined in the International Convention on the Suppression and Punishment of the Crime of Apartheid.

Apartheid did not end with South Africa – a fact recognized by the inclusion of the crime of apartheid in the ICC Rome Statute.

Positive as the current steps may be, the ICC is unable to deal with these questions on a fundamental level since it is based on the “two-state” international framework. However, questions of Palestinian rights (including self-determination) as a whole must be addressed, if Palestinians are ever to see true justice.