According to the survey, 39.2% of young Palestinians in Gaza have lost a job opportunity due to their inability to travel. 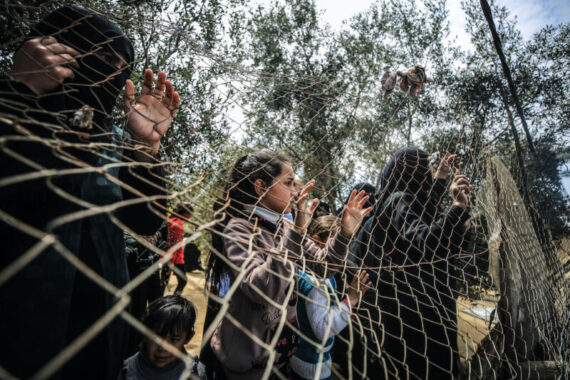 The ICRC survey revealed that 95.6% of young Palestinians have been impacted negatively by the restrictions imposed on Gaza. Photo by Anadou Images

he International Committee of the Red Cross (ICRC) has published the results of its new survey on how Gaza’s youth see their future in light of the ongoing siege and closures. Nine out of 10 young people surveyed said they find their life to be abnormal in Gaza after 15 years of siege, and experience an accumulated feeling of hopelessness.

The survey revealed that nearly 30% of the Gazan youth are dependent on their families while 40% said they have no hope of finding a job in the next 15 years.

In 2012, the United Nations published a report which claimed that Gaza would be unlivable by 2020—a humanitarian catastrophe that is currently taking place.

The population in the Gaza Strip is considered to be young with 20% aged between 18 and 29. Most of the young people who participated in the survey noted that they believe they will continue to face the same challenges, which have been shaping their lives thus far, for many years to come.

After 15 years of closure and siege, it has become nearly impossible for young people to find a job. The humanitarian situation has deteriorated significantly, and scores of young people are leaving the coastal enclave, many of them educated but jobless.

Read: On Land Day in Gaza: Limbs Lost but Not Hope

Needs of the Gazan youths

“The needs of youth go beyond the economic dimension in Gaza, as half of the young people say that they have endured significant mental health issues and one-third of them face social problems. Youth residing in Gaza desperately need a pathway towards hope and opportunity, away from pain and suffering driven by hostilities and movement restrictions,” said Nicolas Geeraert, the deputy head of the ICRC’s sub-delegation in Gaza.

“All we ask for is to live normally like others worldwide. We want to be able to move freely, travel, and have decent jobs,” Nouran Al-Zaeem, 23, told the ICRC.

The online survey, which aims to measure the impact of the restrictions imposed on Gaza on young people, was participated by 385 Gazans aged between 18 and 30.

Suhair Zaqout, the spokesperson of the ICRC in Gaza, told Aljazeera that wars and restrictions imposed on Gaza have contributed to the deterioration of the situation including limiting access to opportunities and jobs outside the Gaza Strip.

According to the survey, 39.2% of young Palestinians in Gaza have lost a job opportunity due to their inability to travel, and 12.9% of students have lost scholarships for the same reason.

Due to the deteriorating situation, many young people in Gaza face psychological problems, in addition to economic and social ones.

The ICRC survey revealed that 95.6% of young Palestinians have been impacted negatively by the restrictions imposed on Gaza, while 49% reported feeling anxiety and depression, and 12.9% have not married due to the economic situation in the coastal enclave.

The Gaza Strip has been under a tight Israeli siege from air, land, and sea since 2007. Three major Israeli military offensives have left behind extensive destruction, with Gaza’s economy spiraling into a free fall. The youth in Gaza feel hopeless about their future, with many embarking on risky routes of migration and dozens losing their lives on the way to Europe.

Read: No Chocolate, No Laptops, No Clothes for Gaza