I remember our suffering while queuing to get cooking gas, flour, or even bread. My family couldn’t find diapers or milk for my nephews and nieces then. Even clothes weren’t available. 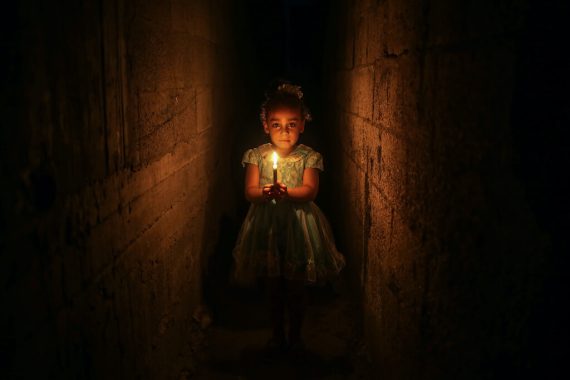 A Palestinian girl holds a candle to lighten her home due to power cut at the Jabalia Camp in Gaza City, Gaza on June 27, 2017. Photo by Ali Jadallah, Anadolu Images

The photo of my favorite chocolate is topping the news websites. When I checked my phone to read the news, I wondered why a bar of chocolate is being mentioned on news sites. It might be rotten or contain something unhealthy, I thought. But what I didn’t expect to read is that Israel is preventing chocolate from entering the Gaza Strip. “What nonsense!” I muttered. “Is it a joke?”

The Israeli occupation intercepted a shipment of 23 tons of chocolate bars headed to Gaza. Israel claims that chocolate revenues go to support Hamas. But this claim doesn’t make sense. I wonder if I travel through the Erez Crossing, connecting Gaza with Israel, and an Israeli soldier asks me how much I love chocolate and how many bars a day I consume, would I be blamed for funding terror?

I expect anything from Israel, as it imposes such unfair and illogical decisions against us. It doesn’t only block chocolate: it also prevents importing many types of goods, including laptops, cleaning materials, clothes, and cars.

Read: Adding Fuel to Fire: The Politics of Power Outages in Gaza

My younger brother, Rafat, is a university student. He was studying for a summer course, but COVID19 forced him to study online. He needed a laptop to attend his online lessons. So, one laptop was not enough for a family with three university students. He was forced to buy a laptop to continue his education remotely, but he could not find one as those available were above his budget. Electronic stores in Gaza had a shortage of laptops, so they were forced to raise prices. The increase of laptop prices deeply upset him and put his educational future at risk.

Electronic stores in Gaza had a shortage of laptops, so they were forced to raise prices.

Not only did my brother Rafat face such a problem, but also my friends Noura and Basma. We attended a freelance translator training course at the university, which required us to have our own laptops.

Noura shared one laptop with her two brothers who studied at the university as well, while Basma’s laptop was broken and there were no spare parts available. Both of them wanted to buy new laptops, but the Israeli siege imposed on Gaza deprived them of being able to satisfy this need. All Gazan families face the same problem.

Part of Our Life

The Gaza siege is part and parcel of our daily conversations. A conversation took place between my older brother, Ismail, and my sister Nihad, who resides in Kuwait, on cars that are allowed into Gaza.

Nihad said that she bought a new 2020 Honda Civic. Ismail responded, “How lucky you are! Israel does not allow this type of car and many other types entering Gaza.” Israelis use the fear of terrorist intrusion and suicide attacks as an excuse – in actual fact, though, they want to kill life in Gaza.

The Gaza siege is part and parcel of our daily conversations.

Our neighbor, Abu Yasin, has another issue with the siege. He owns clothes shops and imported clothes from China for the Eid season. His cargo has been detained at the Karim Abu-Salem border crossing. He had to pay for each night of detainment at the crossing. Abu Yasin has faced great losses, especially as the Eid season is now over. Even if his goods are released, he is obliged to sell them at a cheaper price to compensate for his losses, and to make a profit in order to pay off taxes and accumulated debts.

The Israeli occupation has forced Palestinians to live 54 long years of hunger and poverty. These years have been tough for us. We have lived four destructive Israeli wars in 13 years.

After every war, we hope that we might have a better life in the coastal enclave. But the opposite always happens and things only get worse. We pay a heavy price for just being Palestinians who want to stay on our land.

All these unfair and racist policies led the Palestinian youth of Gaza to protest near the eastern borders of Gaza on August 21, 2021. It was a peaceful protest calling for ending the unjust siege. The demonstrators decided to revolt against the 16-year-long siege, but the Israeli occupation army attacked them randomly, shooting at them without mercy. The demonstrators were only demanding their rights and yet were confronted with violence.

The Israeli army and snipers shot 41 Palestinians, most of whom were children. This prompted a Palestinian with a pistol to shoot one of the snipers as he approached the wall separating Gaza from Israel. As a result, Israeli warplanes launched several airstrikes against Gaza at night. The world, and especially international institutions, ignore these crimes against us. They do nothing to stop Israel’s crimes. Israel feels free to terrorize us with their missiles and guns.

I remember our suffering while queuing to get cooking gas, flour, or even bread. My family couldn’t find diapers or milk for my nephews and nieces then. Even clothes weren’t available, and if one found an item, it was extremely expensive.

All this is not new. Israel has imposed the siege on Gaza since 1967, but it escalated in 2000, following Hamas’s electoral victory. These policies aim to make our lives harder so that we leave. The price we continue to pay for defending our land is unfair and unbearable, but inevitable.

The world continues to care about an Israeli sniper who, along with his gun-mates, shot 41 Palestinians before being shot. The world has to wake up, and the Gaza siege has to end before it all explodes. Then, it might be too late for anything.

Nessma Albhdary is a writer and translator from Palestine who chronicles her life under siege in Gaza.