Millions of Afghans, Iraqis, Syrians and others in the Middle East are struggling to survive in their respective countries or elsewhere and they believe the Washington establishment is responsible for their impoverished condition. 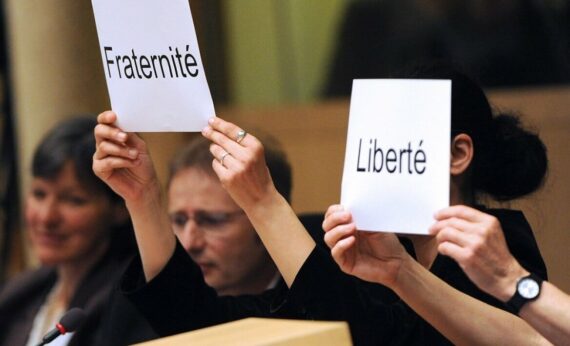 “After Brexit and this [the US] election, everything is possible. A world is collapsing before our eyes,” French Ambassador to the US Gérard Araud tweeted after Trump’s victory, although he later deleted it.

That’s why the people voted for Trump in the first place: to see the unraveling of the Washington establishment, which would’ve perpetuated itself if Hillary had been elected. They wanted everything that is related to or represented by the establishment to burn. It didn’t matter even if the establishment represented different notions internally and externally. The external support was also aiming to destroy this very establishment. Regardless of their different and contradictory motives, there are millions of people who are united in the belief that the current world order, particularly the Washington establishment, should fall.Right or wrong, there are masses concerned about globalization, technological development and robotization, including the “White Americans” that voted for Trump. There are two different realities: international conglomerates which have record high profits, and a middle class which believes they are being undermined. Moreover, there are disgruntled Americans, as the crisis caused by the volatile bond market was remedied with their taxes. There are masses on the other side of the world who believe everything is being done without their consent, just at the push of a button: millions concluding that the very real people behind the statistics are forgotten. In addition, there is a condition which originated in the US and spread across the globe with America’s lead: “the indulgent society”. It’s no longer easy to meet the demands of this society.

These are not the only people living outside the US who wanted Trump elected president instead of Clinton. Many cheered for Trump because the Washington establishment –which is referred to as a “swamp” by Trump supporters – was responsible for creating many “swamps” outside the US.

Millions of Afghans, Iraqis, Syrians and others in the Middle East are struggling to survive in their respective countries or elsewhere and they believe the Washington establishment is responsible for their impoverished condition. While the domestic Trump supporters believed that he would build, foreign supporters hoped for destruction. Even though some believed that their poor conditions would stay the same, regardless of who wins the election, they still relied upon a man who is deemed as the herald of catastrophe for the established order in the US.

Many cheered for Trump because the Washington establishment –which is referred to as a “swamp” by Trump supporters – was responsible for creating many “swamps” outside the US.

Yes, the expression of “animosity and rebellion” is true also for the ones who live outside the New World.

Trump became the conduit for angry masses who were exasperated by what the Washington establishment stood for, its features hidden under a blanket of rhetoric. And he didn’t do this with his ideas or any kind of ideological approach, as he doesn’t possess either. Opposing the superficial presentableness of the order represented by Hillary Clinton, Donald Trump’s campaign was overtly vulgar, coarse and abusive. Looking from Trump’s point of view, “the reality” was simpler and clearer than Clinton’s.

Perhaps the result of this election will cause “Democrats and Republicans to review themselves intellectually and politically” and “allow the formation of new ideas” as the Slovene philosopher Zizek claims, or nothing will change, or it will become worse and worse. However, the subject is surely one worthy of discussion for people inside and outside the US.

In France, where Gerard Araud, was terrified by Trump being elected president, there will be an election in 4 months. If Trump was elected president in one of the oldest democracies of the world, think about who could be elected in France. All politicians, regardless of their position in L’hexagone, including the extremists of both the right and the left, said the same thing, that everything is possible now. Sarkozy and Marine Le Pen were exhilarated by this situation, “this is also true for us” they are likely saying to themselves.

On the other hand, for Socialists and the socialist President Hollande, who has the lowest approval rate in the history of the Fifth Republic, at 4%, this situation is “perilous”. However, if the discontent about Washington establishment is the case, there is an existing dissatisfaction in France towards the bureaucrats of Brussels. If fascist and racist discourse is problematic, France has a worse kind of it. If it is about Muslims, there are intellectuals in France that would make Trump look innocent. Similarly, if the fear of immigration is the case, France already has issues with the ones within the country, let alone the possible immigrants. Everything is also possible in France; however, not because of Trump’s victory. They don’t need his lead. Moreover, the notion existent among the international public – that if the worst has happened, something good might come out of it – is not applicable for France.

Trump-supporting White Americans’ concerns about globalization are also true for the right-wing, left-wing and extremist voters of France. Moreover, even in 1990s, the heyday of globalization, there was significant opposition to the idea on the European side of the Atlantic. These people are thinking that they were right from the beginning. For instance, while French automaker Renault’s domestic production has been increasing abroad, it has been steadily decreasing domestically for the last four years, and is now around 18%. The software used at banks and hospitals is coded in India and then sent to France. Similarly, when someone calls customer service, their questions are being answered by a person on the other side of the world. There are benefits of the information age, however, there are also downsides. Once 30-40 people worked at the banks in the most populous districts in Paris in 1990s, today there are only one or two employees. The cashiers of large bookstores and supermarkets are now being replaced by automats. Furthermore, while people had to wait hours for taxis at Place Saint Michel on Saturday nights 10-15 years ago, now taxis are waiting all night for customers.

Besides globalization, the results of a portion of France’s sovereignty being given to Brussels are not only criticized by extreme right-wing movements. The French who were afraid that France would be dominated by Polish plumbers years ago are now blaming the bureaucrats of Brussels for the majority of the issues, rightfully or not. It should be remembered that the French had rejected the European Constitution in 2005, even though they were one of the co-founders of the EU. On the other hand, Brexit happened. The departure of the once unwanted United Kingdom didn’t make anyone happier. 300,000 French who work on the other side of La Manche are very concerned right now. Moreover, Brexit was yet another kick in the groins of the fading idea of a European Union.

While Trump constantly bashes Mexicans, Puerto Ricans, Hispanics and Blacks, French politicians of all sides are clobbering Muslim Arabs. Things which are taken for granted in the New World, as a result of the individual freedoms provided by the US, are constantly being discussed and criticized in France. With the never-ending hijab and burkini discussion they are pointing the finger at Muslims. Even not eating pork is made a part of political propaganda. The former president Sarkozy recently said if a student does not eat pork when it’s on the school menu, “he skips the ham and eats a double helping of chips. In a republic, it’s the same rule and the same menu for everyone.” On the other hand, the issue has surpassed laicite, a notion that the French are almost religious about, and it evolved into a matter of Frenchness. How to become French; that’s all that matters!

Can Marine Le Pen become le president de la republique? It will definitely be a surprise and it might identify the “terrifying situation” which has existed for a long time.

This is applicable for about 6 million Muslims living in France, who originated from old French colonies. For instance, the French president heralded the fabulous news that Muslim women will throw their hijabs away once they free themselves and at last will become French. On the other hand, the much-criticized vulgar views of Trump have an ideological basis in France. No need to name the names behind fascist and racist opinions of French elites, philosophers, intellectuals and politicians that have become more prominent lately. Furthermore, while Trump talks about building a wall between the US and Mexico, the socialist mayor of Paris already built walls around subways, just so Syrians immigrants shouldn’t even try to come into France.

Is “everything possible” in next year’s presidential elections on the European shore of the Atlantic? Can Marine Le Pen become le president de la republique? It will definitely be a surprise and it might identify the “terrifying situation” which has existed for a long time. Even though their frequencies are different and not directly expressed, many of the extremist right-wing notions are being pronounced by both the right and the left. If not one, it will definitely be the other. Either way, a Trump with ideas and an ideological basis will emerge victorious for sure, even though he or she cannot express himself or herself as well as Trump.