Imams in Politics: Secularism vs. Religion in Mali and Senegal

Participation of religious figures in African politics is a sensitive topic because of the confrontations it incurs between critics and supporters of secularism. 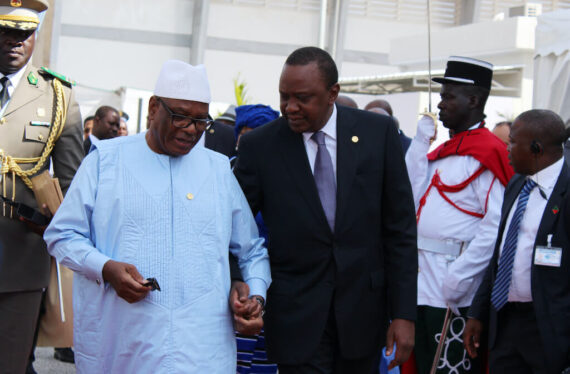 Religion in politics is obvious in Africa but also a sensitive topic because of the confrontations it incurs between critics and supporters of secularism. In a country like Nigeria, it might lead to tensions between Muslims and Christians, considering the fact that religious affiliation and ethnicity were excluded in the country’s national census in 1991 (and since 2006) to avoid ethnic conflicts and religious rivalries.

Regardless of the sensitivity, religion still plays an important role in leadership issues, and religious leaders still influence directly or indirectly the decisions of their followers during political practices, ethnic and social dialogues. Religion institution has also been the refuge of whenever people in the region lost confidence in their political leaders.

Contrary to the opinions of some Islamic scholars who frown at secularism, and the stands of secularists who see secularism as a value to exclude or categorize some sections of the society, the political developments in Mali between 2018 and 2020, and the events in Senegal following the 2021 protests offered a glimpse of what religious leaders can achieve in moving a nation forward and avoiding plunging it into unending chaos or “civil” war.

VIDEO: The Rise of Islam in Mali

When the news of protests in Mali broke out in 2020, the focus quickly shifted after some days from the critical issues that led to the protests, such as the government incompetence, endemic corruption, and a declining economy, to the activism of the former president of Mali’s High Islamic Council (HCI), Imam Mahmoud Dicko, who was one of the leaders of the protest.

The Malian case showed that Islamic religious leaders in the country are diverse in their intellectual tradition, but also collaborative in political and other important issues.

On the one hand, the Malian case showed that Islamic religious leaders in the country are diverse in their intellectual tradition, but also collaborative in political and other important issues.

Iman Dicko, a “Salafi” figure who studied in Saudi Arabia and Mauritania, has been at the forefront of demanding social change and the basic needs of Malians since 2013 when he supported the presidential ambition of the ousted president, Ibrahim Boubacar Keïta. During this period, he collaborated and worked with other religious leaders from different sects of the society, including Sufis and liberals.

Also, the current president of the High Islamic Council (HCI), Sheikh Chérif Ousmane Madani Haidara, a Sufi leader with strong followership in Mali, Ivory Coast, Burkina Faso, and the Malian diaspora, criticized the rebellion activities of the Mouvement National de l’Azawad and considered members of the group as “apostates”.

Read: Radicalization and Religion: How It Happens?

The 2020 events in Mali showed the role of an Imam in a troubled nation. While foreign allies of Mali, neighboring countries, and critics, including Salafi figures, accused Imam Dicko of instigating instability and stirring violence by heading the protest movement, the Imam has served as a mediator between the Malian government, terrorist groups in the northern part of the country and the oppositions.

Forcing the idea of non-participation of a religious leader in politics in a country like Mali and looking at religious activities through the limited established lens of fighting terrorism, anti-extremism, and radicalization could be more problematic than the solutions it tends to present.

Mali’s population based on a 2019 estimate was over 19.66 million of which 94.8% are Muslims, while the remaining 5.2% are Christians (2.4%), Animists (2%), and none/unspecified (0.8%). This also explains the reason behind the strong supports Imam Dicko and other Malian Imams enjoy many occasions, among which were Dicko’s campaign that forced the Malian government to weaken legislation that promotes gender equality, and his successful opposition toward the introduction of sex education in schools.

On the other hand, the participation of the Malian Imams in politics cannot be used as a yardstick for many other countries in the region due to their diverse population. There is still a lack of interest in democratic politics from Islamic leaders in contemporary sub-Saharan Africa despite the region’s history of harmony and integration between priests or religious leaders and kings, who also occupied religious positions in some of the ancient kingdoms and societies.

Another issue is the reserved positions of some Islamic leaders in the region toward secular democracy, repercussions of western invasions on their societies, and the fear of losing their dominance. The most noticeable feature in Mali and Senegal is the active interaction of religious leaders with government officials through their positions of independence from authorities which gave them the freedom of engagement in the most effective ways.

The distinctive case of Senegal aligns with the equivocal relationship between the religious institutions and the government. Senegal is considered a secular state influenced by France and about 96% of the population are Muslims, and records of peaceful transfer of power. These, according to Rachid Id Yassine, differentiate Senegal from other countries with predominantly Christian populations where the participation of religious leaders in secularism and democracy is usually linked to Christians.

Senegal’s secularism has been described as a model between the French and American models: political leaders have used religion in governing their people, anti-religion groups have also tried to tone down the influence of religion for their gains, while religious leaders have also used their power in their sector or regions of dominance without threatening the country’s peaceful coexistence. Hence, religious and democratic institutions have benefited one another rather than seeking to undermine each other.

The Senegalese marabouts have guided the country in turbulent times: many of them played a neutral role in the 2012 presidential election. Although some of them also took sides by either supporting the then President Aboulaye Wade or the opposition candidate and current president Macky Sall because of the financial interest or recuperation of their waning influence as a result of participation only in spiritual and religious matters.

The religious leaders in Senegal were also able to mediate between the government and the opposition group known as the Movement for Defense of Democracy (M2D). They successfully convinced the opposition to call off a planned protest on March 13, 2021, after the unrest from earlier protests over the arrest of Ousmane Sonko, one of president Sall’s rivals.

Finally, while the level of participation of religious leaders in political processes in sub-Saharan Africa is not uniform, and the roles they play have some differences and similarities based on each country’s religious and cultural backgrounds, the overall observation is that presently there is no prospect of wide-range participation in the electoral activity for public offices and posts among Islamic religious figures in the region. This is because most of these religious leaders cannot afford to lose their independent authority and influence privilege.

This means that they have to carry on with the tasks entrusted to them by their doctrine and society, while also avoid any clash with the government for the fear of losing officials’ support or recognition. The pursuit of recognition, resources, and luxurious lifestyles is among what tinted the image of religious leaders as the biggest beneficiaries of the political status quo in the region.

There are also prominent Islamic scholars who have relatively maintained a balance between religious affairs and political issues, like Sheikh Haidara, who has been wary of campaign endorsements, party contributions, and overt political activities.

Also Read
Faith, Society, Politics: How the Coronavirus is Changing the World