New Delhi is now planning for the inevitable by reaching out to the Taliban. 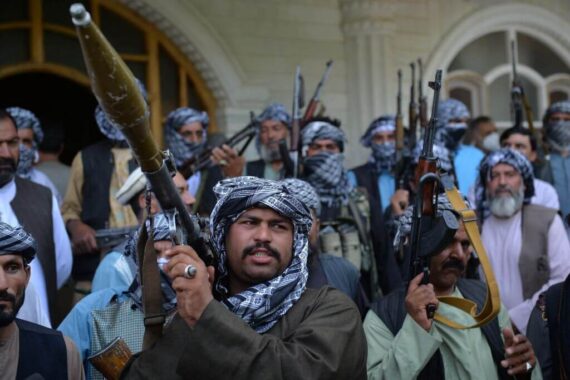 Afghan militia gather with their weapons to support Afghanistan security forces against the Taliban, in Afghan warlord and former Mujahideen leader Ismail Khan's house in Herat on July 9, 2021. Photo by Hoshang Hashimi, AFP via Getty Images

If the sum of New Delhi’s fears is a Taliban take-over of Afghan government in Kabul, then those anxieties received a further jolt on 26 July when Pakistan reopened a major southwestern border crossing that is currently under Taliban control on the Afghan side.

Islamabad has said the border crossing will be used only for the transportation of food and other goods, the Afghan government has accused Pakistan of backing the Taliban, an accusation that invites the Indian government to imagine future teams of violent jihadists flowing across Pakistan into India and Kashmir.

New Delhi is also acutely aware that a destabilized Afghanistan, or one controlled by the Taliban is totally fine with Islamabad, particularly because friendly relations between the Indian government and Kabul is the sum of Islamabad’s fears. What Pakistan fears most is being wedged between two hostile states – India on its eastern border and an Indian friendly Kabul on its western frontier.

It’s for these reasons, Pakistan has a close or cordial relationship with the Taliban, and India with the Afghan government, thus posing a strategic problem for New Delhi as the militants make their seemingly unstoppable march towards the Afghan capital.

New Delhi is now planning for the inevitable by reaching out to the Taliban, an effort made complicated by the military support it has long provided the Afghan government in its war against the militants. India has already invested $3 billion in aid and reconstruction activities in the country, including providing Kabul with combat helicopters, artillery platforms, small arms, surveillance and targeting technologies and ammunition.

Kabul has been pleading with New Delhi for more military assistance and sent Afghan Army chief Wali Mohammad Ahmadzai to India on 27 July for a 3-day series of meetings with his Indian military counterparts, but requests for more weapons and Indian soldiers have fallen largely upon deaf ears because the Taliban appear set for total victory.

India’s former ambassador to the United Nations, Syed Akbaruddin, said in a recent interview that there’s no chance of India sending troops to Afghanistan, saying, “We have challenges on our own frontiers too. In the current situation I don’t think there is any political or public acceptance for it.”

Instead, New Delhi is “scrambling” to open diplomatic channels with the Taliban, with India’s External Affairs Minister S. Jaishankar signalling his country’s interest in engaging with the Taliban during a video conference held in September of last year.

But to date, this effort has also fallen upon deaf ears because of India’s hitherto military partnership with the Afghan government.

Suhail Shaheen, a spokesperson for the Taliban, accused India of “siding with the government installed by foreigners” during a recent interview with Foreign Policy.

“They are not with us. If they stick to their policy of supporting a government imposed on Afghans, then maybe they should be worried. That is a wrong policy which will not serve them,” he said, before adding, “We have reports from our commanders that India is providing weapons to the other side.”

“How is it possible that they want to talk to the Taliban but practically they are providing weapons, drones, everything to Kabul? This is contradictory.”

This – a starkly contrasting tone to the one struck five years ago, when a former Taliban spokesperson said the group had “no problem with Hindustan…In fact, we want to send them a message of peace and friendship.”

But now that the Taliban anticipates victory, it sees little or no advantage in forging close diplomatic ties with New Delhi, especially given neighboring Pakistan, China and Iran, along with Russia have each expressed a willingness to accept and normalize a future Taliban controlled Afghan government.

From the Taliban’s perspective, it’s fledgling relationship with China offers the most upside, given the Asian country’s status as a regional and global superpower, and its desire to include Afghanistan as part of its Belt and Road Initiative, having expressed interest to construct a motorway connecting Kabul to Peshawar, Pakistan, as reported by the Daily Beast.

That said, any future relationship China, Pakistan, Russia, and Iran strikes with the Taliban will not come without unwanted complications and blowback, a reality that gives India room to pause and breathe, particularly because each of these countries has ongoing security issues with what they deem to be Islamic extremists and separatists within their own borders.

“This explains why not only India but several Asian countries consider the return of Taliban as a security headache despite Pakistan and China reportedly looking for an advantageous role in Afghanistan, the strategic heart of Asia,” observes India Today columnist Prabhash K. Dutta.

India will take heart from the fact that the Taliban is likely to incite fear and a sense of insecurity among non-Pashtun ethnic communities along the Afghan-Pak border, which might spark conflict within Pakistan’s borders.

India will also see value in persisting with backchannel diplomacy with the Taliban, knowing the militant group will need significant outside help to reconstruct the country in a post-civil war environment. The Taliban will also see upside in establishing a security guarantee with India to allow it space to focus almost exclusively on domestic concerns.

But for now, New Delhi is adopting a multilateral approach to unfolding events in Afghanistan by calling for peaceful reconciliation between the Afghan government and the Taliban, while at the same time urging its geopolitical allies, including the United States, to avoid presuming the insurgent group has secured victory, and to not rush into “normalizing” a Taliban takeover of the country.

Also Read
Peace Talks and Afghanistan’s Future: Three Scenarios
We use cookies to optimize your online user experience. To learn about our use of cookies and how you can manage your cookie settings, please see our Privacy Policy. By continuing to use our site you are excepting our use of cookies.Accept Cookies & CloseMore Info