The ideology, legacy, and constituency of Al Qaeda are still present in Afghanistan. 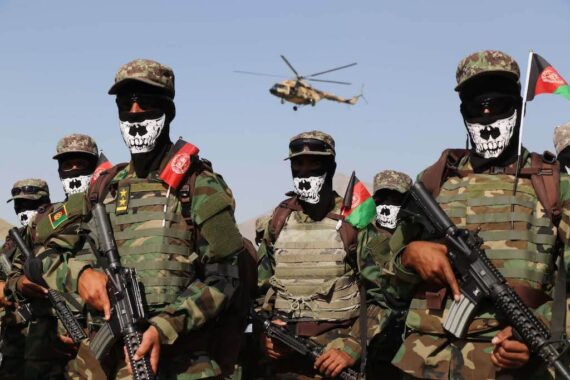 Afghan special force commando unit officers and soldiers attend a graduation ceremony at the military academy in Kabul, Afghanistan, on May 31, 2021. At least hundreds Afghan special force commando officers and soldiers including women were graduated. According to the reports, the Taliban have significantly increased violence immediately across the Afghanistan after the US, and NATO forces began the last phase of their pull out of the country on 01 May. Photo by Haroon Sabawoon. Anadolu Images.

U.S. President Joe Biden announced last week that the U.S. military mission in Afghanistan will end by August 31. He called on the leaders of Afghanistan to come together to prevent a possible civil war after the U.S. withdrawal. The U.S. president asserted that “after 20 years of American valor and sacrifice, it’s time to bring those troops home.” In April, during testimony before the Senate Foreign Relations Committee, Zalmay Khalilzad, U.S. special representative for Afghanistan, made a similar statement, stating, “The choice that the Afghans face is between a negotiated political settlement or a long war.”

After 9/11, the U.S. and its allies invaded Afghanistan to oust the Taliban’s regime and annihilate Al-Qaeda. With the current withdrawal of U.S. troops, have these objectives been achieved?

To examine the first objective, it is widely believed that Al-Qaeda is still present in Afghanistan. The UN Security Council report dated February 3, 2021 states that Al-Qaeda has 200 to 500 fighters in about 11 provinces of Afghanistan. According to the report, Al-Qaeda media chief Abu Muhsin al-Masri was killed in Ghazni province on October 20, 2020, and a deputy of Al-Qaeda, Mohammad Hanif, was killed in Farah province on November 10, 2020.

The Taliban commanders have also acknowledged the presence of Al-Qaeda in the country. Two Taliban commanders told NBC News that the Taliban have asked foreign militants and Al-Qaeda not to execute any terrorist attack against the United States. The U.S. and NATO forces achieved a splinter of their objective when they killed Osama bin Laden, the leader of Al-Qaeda in Pakistan. However, the ideology, legacy, and adherents of Al-Qaeda are still present in Afghanistan.

As far as the Taliban are concerned, the U.S. invasion of Afghanistan did not lead to their defeat.

In his speech, Biden stated that Al-Qaeda has been downgraded, which is true. Nonetheless, the Taliban were also severely downgraded after the U.S. invasion of Afghanistan. However, the group soon remerged and now governs more than half of the country. Should Al-Qaeda expand its presence in Afghanistan, the group might consider vengeance for the killing of their leader and his immediate circle. Hence, without a proper political settlement, the withdrawal of U.S. troops will imperil the country as Al-Qaeda will be strengthened and other militant groups will possibly emerge.

As far as the Taliban are concerned, the U.S. invasion of Afghanistan did not lead to their defeat. Despite the fact that the Taliban were downgraded at first, at a later stage, they made a triumphant comeback. After the September 11 terrorist attack, an international coalition force was able to topple the Taliban regime and entrench the Afghan government.

Nevertheless, the Taliban soon remerged and began fighting the foreign troops and the Afghan government. Today, the Taliban have a robust presence and control a larger territory. The group is more confident than ever before that as soon as the U.S. troops pull out, they will oust the Afghan government and rule the country. Although it would be arduous for the Taliban to take over the entire country, the group will intensify war and confine the government to the central provinces and urban centers. In addition, the Taliban will proclaim the U.S. withdrawal as a defeat and will hail themselves victorious.

Not only did the United States not achieve its objectives, but its withdrawal imperils the significant work that has been achieved over the last 20 years on democracy, institution building, and human rights. Despite fraud and the risk of being targeted by the Taliban, millions of Afghan women and men cast their votes in the presidential elections of 2004, 2009, 2014, and 2019.

It is widely believed that the Taliban do not encompass elections in their restricted Islamic manifesto. The Taliban vow that the group will return Sharia, a fastidious form of Islam that discards free elections. The group would be obedient to the decisions of its religious scholars.

Despite the fact that the Taliban proclaim that the group will allow women to pursue education and to work, they do not permit any women to work in the territory they control. Afghan women in the incumbent government have active participation in the cabinet, parliament, and serve as high-level government officials.

Read: “Istanbul Is a Testing Ground for the Afghan Peace Talks”: An Interview with Heela Najibullah

Women also play active roles as civil society activists, in the media, and in political parties. The return of the Taliban would strike a blow against the rights women exercise today with the support of the U.S. and the international community. The withdrawal of the U.S. troops from Afghanistan will eradicate all these achievements.

Understandably, the Afghans should have learned from their past mistakes and should not have started a civil war following Soviet Union’s withdrawal. Equally, the Western governments should not have abandoned Afghanistan – a mistake that resulted in 9/11. It is time for Afghans to solve their differences, avoid past mistakes, and make sure that Afghanistan is at peace with itself and the world.

Similarly, the U.S. must make sure not to leave behind an Afghanistan which turns into a hotbed of new terrorist groups with a capacity to organize attacks globally. The U.S. withdrawal should be contingent on a political settlement and perpetual peace – otherwise, the country will descend into another civil war and will endanger the U.S. with another 9/11.

VIDEO: One on One – Taliban spokesperson Suhail Shaheen