Inside Northern Iraq: Hope and Despair are Side by Side

Threats of sanctions combined with sharp remarks by Ankara, Tehran and Baghdad along with attacks and escalated tensions in Kirkuk are making people think about what kind of an adventure they have embarked. 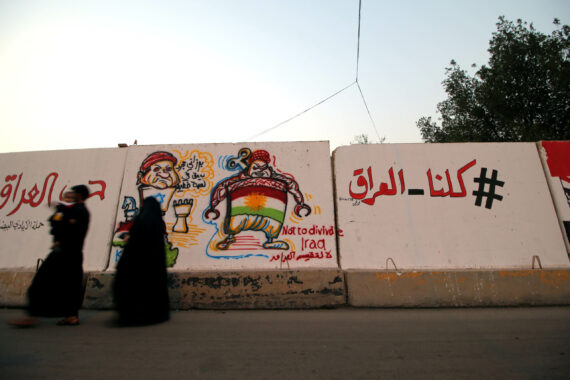 There is great joy in Erbil, celebrations and parades on the streets. Iraqi Kurds are exhilarated; they feel like they are progressing towards independence after the September 25 referendum. I was in Erbil right after the referendum and these were my first impressions. However, when I started to talk with people on the street and visit cities like Kirkuk and Sulaymaniyah a couple of days after the referendum, I observed that this mood was shifting. Exhilaration is replaced by unease. Threats of sanctions combined with sharp remarks by Ankara, Tehran and Baghdad along with attacks and escalated tensions in Kirkuk are making people think about what kind of an adventure they have embarked. Everyone is talking about where this is going; the fear of losing all that is achieved could be felt in the air. All people, from the person on the street to politicians, believe that Western countries and Israel will protect them. They aren’t afraid of expressing this openly; however, the look in their eyes, the anxiety indicates that this belief isn’t strong.

Ultimately, the Kurdistan Regional Government (KRG) led by Masoud Barzani and KDP was able to hold the referendum on September 25 in regions including the disputed areas. The timing along with the realization of the referendum despite all regional and international objections raise some questions. The international legitimacy was derived from the balance of domestic politics, consolidating regional authority and Baghdad’s vulnerability combined with fighting against Daesh. Assessing the situation rationally, it seems that opportunities provided by the political conjuncture triggered KRG’s quest for independence. Yet, I’m questioning the existence of other factors that were effective in the referendum process; whether an ecstasy caused by late ethic nationalism and overconfidence or the manipulation of certain international forces, that I don’t know. Nevertheless, they suffered from an eclipse of reason that blinded them to the threats they were to face.

Even though KRG was prepared for the reactions following the referendum to an extent, it seems that they couldn’t calculate the collective reaction from Baghdad, Tehran and Ankara. They are trying to relieve tensions with Turkey by making some positive remarks regarding the country. Moreover, they are running an international campaign on why KRG’s independence bid must be supported by implying that they play a prominent role against Daesh and have the potential to further Western interest in the region. On the other hand, they are trying to gain the US and EU’s protection by suggesting that Kurds are under a ruthless siege by three countries.

Meanwhile, Erbil is seemingly open to political resolutions and negotiations with Baghdad while refraining from conflict. However, the statements made by Barzani indicate that these negotiations will only be about managing the independence process, which Ibadi has clearly rejected. My observations from the field suggest that Turkey, Iran and Iraq could force KRG to act in a way that doesn’t infringe Iraq’s territorial integrity by creating realpolitik dynamics that could impede their quest for independence, if not completely rendering it irrelevant, through coordinated efforts. The politics of sanction is prominent in this respect; with political, economic and military sanctions, KRG could be forced to negotiate with Baghdad.

Turkey has a number of trump cards in this matter. While establishing correspondence with Iran and Iraq, Turkey should develop a careful strategy that would not allow KRG to fall completely into the area of influence of Tehran-Baghdad. Without severing ties with KDP, Turkey should consolidate its relations with other actors that are critical of the referendum. Turkey should also refrain from seemingly targeting the local populace, keeping the existing sympathy towards Turkey intact. More importantly, however, Turkey should seek opportunities to constrain PKK during this new engagement with Baghdad. Along with searching for a common ground resolution for the Sinjar region, Turkey should break the line between PYD/YPG and KRG, while establishing an alternative border checkpoint to Habur. Moreover, Turkey should persuade Baghdad to protect the rights of Turkmens in Iraq, especially those in Kirkuk.