Despite heavy opposition from Israel, Palestine has been accepted as a full member of Interpol on Wednesday. 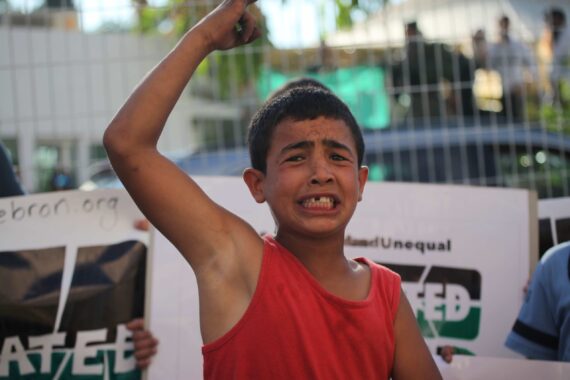 A Palestinian child shouts slogans during a protest against Israeli restrictions on Masjid-e-Khalil and Palestinians' freedom of action in Hebron, West Bank on August 28, 2017. Anadolu Agency

After applying for UN membership and being granted ‘Non-Member Observer’ status in 2012, Palestine has now been voted into the global police network, Interpol.

Despite heavy opposition from Israel, Palestine has been accepted as a full member of Interpol on Wednesday.

According to the Palestine Liberation Organization’s (PLO) diplomatic wing, Palestine was voted in by more than 75 percent of member states at the organization’s general assembly in China.

Earlier in the day, the Israeli Foreign Ministry issued a statement claiming that they and other countries had delayed the vote after complaining about ‘irregularities.’

“We continue to struggle,” the statement said, highlighting Israel’s attempts to block membership for Palestine.

The Jerusalem Post reported that Israel’s opposition was due to the fact that Israel was worried Palestine’s membership could mean issuing warrants against Israeli citizens.

A previous attempt to join Interpol was curbed during Interpol’s previous general assembly in Indonesia, when the body decided to postpone any vote on accepting new members.

Talking to Anadolu Agency, Mufid al-Hassaina, Palestine’s Minister of Public Works thanked the Turkish government and the Turkish Cooperation and Coordination Agency (TIKA) for their humanitarian efforts in the Gaza Strip.

Emphasizing his appreciation, al-Hassaina thanked the leaders of Turkey: “On behalf of the people of Palestine, I’d like to thank President Recep Tayyip Erdogan and Prime Minister Binali Yildirim and the Turkish community for their support for the Palestinian cause.”

He informed that TIKA had completed a housing project in Gaza, which would meet the shelter needs of 2,250 people, principally war victims, the needy poor and the disabled.

Highlighting the importance of the solar energy panels that TIKA installed for local people suffering from Israeli power cuts, including those in hospitals, al-Hassaina added that “a lot of people were saved in operating rooms thanks to TIKA.”

The solar panels are also critical for education needs as power cuts by the Israeli state can last up to 21 hours.

Citing the Turkey-Palestine Friendship Hospital, which is due to be opened in 2018, and set to be the largest hospital in Gaza, al-Hassaina explained how “the hospitals built by Turkey have already provided great assistance to the Palestinian people.”

In regards to the new hospital, al-Hassaina informed that the hospital staff would be chosen with coordination between Turkish and Palestinian authorities.

On Muhammad Murtaja, a TIKA employee who was detained in February this year, he said: “Israel has blocked the Gaza Strip since 2006; international groups carrying out humanitarian aid are pressured and blocked by them.”

Murtaja was detained by Israeli forces on February 12. After 37 days in custody, the court decided that he would be jailed pending trial.