With the attendance of President Erdogan, awards were given to Craig and Cindy Corrie on behalf of Rachel Corrie, who was killed by the Israeli army in 2003, to Noor Fitri, Bejamin Ladraa and to Muthir Hani on behalf of Naji al-Ali. 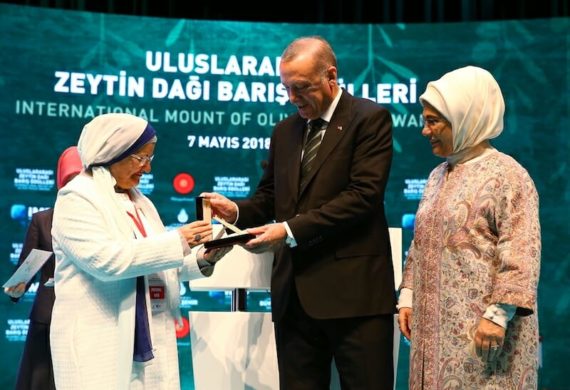 President of Jerusalem Platform Belkis Ibrahimhakkioglu (L) give plaque to President of Turkey Recep Tayyip Erdogan and his wife Emine Erdogan (R) during the International Mount of Olives Peace Awards Ceremony in Istanbul, Turkey on May 7, 2018. AA

On Monday 7 May, 2018, the International Mount of Olives Peace Awards found their recipients at the Cemal Resit Rey Concert Hall in Istanbul, Turkey.

Under the premiership of the Turkish presidency and organized by the Al-Quds Platform in Istanbul, the International Mount of Olives Peace Awards were rewarded to four different individuals for their long commitment to the Palestinian cause.

With the attendance of President Erdogan, First Lady Emine Erdogan, Turkey’s Minister of Culture and Tourism Numan Kurtulmus, Mayor of Istanbul Vasip Sahin and leader of the Istanbul Metropolitan Municipality Mevlut Uysal, awards were given to Craig and Cindy Corrie on behalf of Rachel Corrie, to Noor Fitri, Benjamin Ladraa and to Muthir Hani on behalf of Naji al-Ali.

Opening the ceremony, chair of the Al-Quds Platform, Belkis Ibrahimhakkioglu thanked the President and guests for their attendance.

Drawing attention to the historical atrocities in Palestine, Ibrahimhakkioglu stated, “The 100. Anniversary of the Nakbah is nearly here. The map of Palestine was changed and the displacement of Palestinian people occurred in only 24 hours. Both Israel and the U.S. are going to celebrate their oppression. They are going to engulf a sense of enmity and blame others. And again, regardless of UN decisions, no one is going to do anything. Reactions are going to stay limited to on paper and the occupation in Palestine is going to continue.”

“Only a minimal number of voices are going to be heard. For this reason, we should increase the number of loud voices within these minimal voices. These loud voices should turn into strong and systematic programs.”

Speaking after Belkis Ibrahimhakkioglu, President Erdogan re-iterated his “the world is bigger than 5″ slogan in the name of finding peace for the decades-long Arab-Israeli conflict. The President also underlined what Ibrahimhakkioglu mentioned in her speech, and further stated that reform of the United Nations is now not a choice but a necessity, as countries – referring to the U.S. decision to recognize Jerusalem as the capital of Israel – regardless of UN decisions – can act alone and go againt the international community.

Who are the recipients?

Craig and Cindy Corrie, parents of Rachel Corrie, a U.S. citizen who was killed by the Israeli army in 2003 received their award from President Erdogan.

Corrie was in the Gaza Strip in 2003 as part of her work with the International Solidarity movement, a movement that looks worldwide for people to help with their nonviolent protests against the Israeli military in the West Bank.

After her death, The Rachel Corrie Foundation for Peace and Justice was founded to “support programs that foster connections between people, that build understanding, respect, and appreciation for differences, and that promote cooperation within and between local and global communities.”

After receiving their award from President Erdogan, during their speech, both Cindy and Craig Corrie upheld what their daughter stood for.

Thanking the Turkish public for standing by them since the death of their daughter, Cindy Corrie stated, “We are honored and humbled to be included among the recipients, and we are mindful of the fact that the people of Turkey have stood with our family since 2003 when Rachel was killed.”

Drawing attention to the continuing human rights infringements occurring in Palestine, Craig Corrie stated, “We have watched protesters and members of media brutally killed during these past weeks, as the people of Gaza have turned to the world, demanding their rights and an end to occupation and siege. As citizens of the world, we have an obligation to protect the lives of those everywhere, who at great risk, stand for freedom, and bear witness for us to injustice.”

Rewarded her award by Emine Erdogan, Noor Fitri was aboard on the Mavi Marmara. After being detained by the Israeli forces, she was finally set free to return to her own country. Upon arriving to Indonesia, she founded Adara Relief International, which is an organization that seeks to help those that have been affected by war, conflict and natural disasters.

Upon receiving her award, after thanking the Al-Quds Platform and the Turkish presidency for their support to the Palestinian cause, Fitri remembered the martyrs of Mavi Marmara and said, “I take this award for my brothers that were martyred on Mavi Marmara.”

Benjamin Ladraa received his award from leader of the Istanbul Metropolitan Municipality Mevlut Uysal. A young activist from Sweeden, Ladraa has drawn attention to the human rights abuses and the Israeli occupation with his steps. Having set off his journey in August 2017, Ladraa has walked through 11 countries and got to Turkey in March 2018.

Explaining the reasoning behind his particular method of resistance, Ladraa stated that “every step taken is important.” During his speech at the awards evening Ladraa emphasized how walking has allowed him to meet new people and to explain the situation in Palestine. His end aim is to go to Northern Cyprus and take a boat to Palestine – not knowing whether he will be granted entry by the Israeli forces.

Naji al-Ali, forced to leave Palestine, and well known for his famous cartoon ‘Hanzala’ was assassinated by the Israeli secret service, Mossad, in 1987.

Hanzala was a cartoon depicting a young boy aged 10, who always had his back to the viewer, reflecting how the world has remained silent to the issues in Palestine.

Describing Hanzala, Naji al-Ali once wrote: “Hanzala was born at the age of ten and will always remain ten. At that age I left my country and only when Hanzala returns to Palestine will he grow up and exceed the age of ten. The rules of nature do not apply on him. He is an exception and things will only be natural in his case when he returns to Palestine. The child is a symbolic representation of myself and the group who lives and endures the situation we are all in. I offered him to the readers and called him Hanzala as a symbol of bitterness. In the beginning I offered him as a Palestinian child and with the development of his awareness he had a patriotic and a human outlook.”