In the aftermath of the upcoming state elections on Sunday, German Christian Democrat politicians will most likely clarify the party’s future positions by solving its intra-party conflicts. 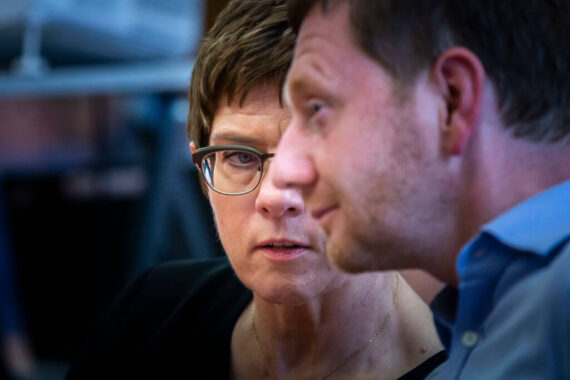 Party leader of the CDU Annegret Kramp-Karrenbauer and Michael Kretschmer Minister-President of Saxony attend a discussion event about the transition of the regions coal industryon August 25, 2019 Dresden, Germany. Getty Images

With no doubt, most of the attention over the past few weeks has focused on the Saxony election campaign and the CDU’s activities both at the federal and state level, in particular the highly public inter-party conflict between senior CDU members. CDU’s federal chairperson, Annegret Kramp-Karenbauer, and CDU Minister President of Saxony, Michael Kretschmer, both had controversial disputes with the former chief of Germany’s federal domestic intelligence and fellow CDU member, Hans-Georg Maaßen. As a representative of the so-called “union of values” group, a right leaning faction within the CDU, Maaßen was supporting the CDU in their election campaign in Saxony, a state the CDU is losing ground to the right-wing AfD. He also attended some campaign events until he decided to stop supporting the CDU’s Saxony election campaign due to criticism he received from Kretschmer.

In the previous weeks, though, it was Kramp-Karrenbauer who surprisingly criticized Maaßen, even stating that: “There are high hurdles for expelling someone from the party, and for good reason. But when it comes to Mr. Maaßen’s attitude, I don’t see anything that really connects him with CDU”. This was interpreted as a call for Maaßen’s exclusion from the party. These statements provoked anger among CDU politicians, particularly in Saxony. Later on, Kramp-Karrenbauer revised her statement by saying that she did not mean a party ban for Maaßen, and that “the CDU is a party with more than 400.000 members, that makes everyone have their own opinion, that makes us interesting.”

Saxony’s incumbent Minister President Kretschmer, criticized Maaßen due to his campaign activities, leading Maaßen to declare that he will not participate in any further election activities in Saxony. He also added that he will concentrate on the CDU’s activities and election campaign in Brandenburg. This is despite the fact that Maaßen does not have any official roles nor any future goal of being elected in that state. Maaßens’s mood was remarkable as he stated that “I wanted to help my party in Saxony but if the Minister President Kretschmer does not see this as necessary, I quit and wish the CDU Saxony good luck!”

CDU cannot afford additional huge losses in Saxony and Brandenburg, which might also undermine the future position of Kramp-Karrenbauer as CDU’s federal chairperson.

Furthermore, Maaßen recently invited Kramp-Karrenbauer to meet in order to explain his positions. However, this was  indirectly rejected due to her busy election campaign agenda in Saxony.

These recent incidents can be viewed from a negative and positive point of view. On the one hand, it is quite a good sign that leading CDU figures have started to openly criticize Maaßen due to his stances that contradict the CDU’s main lines. Although there are some new perspectives within the party, following the main CDU party line is an aim by the party’s leaders. This is despite right-wing oriented groupings in the party openly comparing themselves with rightists and actually admiring AfD’s perspectives. In such circumstances, it is a difficult decision to determine at what point a center party can tolerate dissenting voices and where to draw a clear line in order to ensure the party’s unity.

Unfortunately, it also shows how populist sentiment has struck center parties, even as the CDU. Considering these issues, it needs to be reminded that there has been a huge lack of criticism of stances held by Maaßen’s or others within the party’s right wing. Consequently, keeping silent and allowing Maaßen to speak for a long time during an election campaign in Eastern Germany, can regarded as a miscalculation from leaders in the CDU.

Thus, it becomes clear that in the aftermath of the upcoming state elections on Sunday, the CDU will most likely clarify the party’s future positions by solving its intra-party conflicts. For this the party cannot afford additional huge losses in both federal states, which might also undermine the future position of Kramp-Karrenbauer as CDU’s federal chairperson.