Iran and the YPG: Friends or Foes?

During Operation Olive Branch, the YPG has used, visually confirmed, Iranian weapons. Among them are Iran-produced 107mm rockets, which were also found earlier in Turkey during anti-terror operations against the PKK. 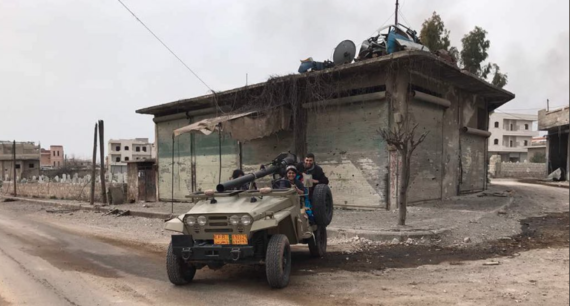 As the U.S. Secretary of State Rex Tillerson explained the shift in U.S. policy priorities in Syria towards an attempt to limit Iranian influence by close cooperation with the YPG-dominated Syrian Democratic Forces (SDF), questions have emerged regarding how realistic such policies would be. This is especially relevant in regards to the long YPG-Iran cooperation in Syria, of which signs are still visible in Afrin. Therefore, it is questionable as to how the very same YPG will “limit” Iranian influence in Syria.

Iran’s cooperation with the YPG before Kobane

While the U.S. officially listed the YPG as the Syrian branch of the PKK, with the battles in Ayn al Arab – better known as Kobane – the U.S. suddenly deleted the YPG from their list of terrorists. The U.S. decision to work with the YPG in Syria led to serious concerns in Turkey as the government in Ankara began questioning why a NATO ally was supporting a terrorist organization that threatens the national security of another NATO member.

Before the U.S. began to cooperate with the YPG in Syria, Iran, the Iranian Revolutionary Guard Corps and the Assad regime were among the main allies of the terrorist group. This was to such an extent that the Assad regime handed over certain areas at the southern border of Turkey to the YPG in order to neutralize the Syrian Kurds who were an active part of the Syrian opposition at the time. With such control in Syria, YPG militants eliminated important Kurdish figures and organizations in their areas of control, weakening opposition against the Assad regime.

Before the U.S. began to cooperate with the YPG in Syria, Iran, the Iranian Revolutionary Guard Corps and the Assad regime were among the main allies of the terrorist group.

More, YPG presence in Afrin and Aleppo city made them de-facto allies with Iran and Iran-backed militias. The YPG in the Sheikh Maqsoud district neutralized an important frontline for the besieged regime forces in Aleppo and lately besieged the city. The YPG in Afrin played an important role in supplying the Iran-backed militias in the besieged pockets of Nubbl and Zahra and for the siege of Aleppo, which resulted in the capture of the city by the Assad regime and Iran-backed militias. YPG militants in Afrin, Aleppo city, Ayn al-Arab and rural Hasakah had mainly been supplied by Iran and the Assad regime.

Iran’s cooperation with the YPG-dominated SDF

Tillerson states that the U.S. wants to maintain an open-ended military presence in Syria, not only to fight Daesh, but also to provide a bulwark against Iranian influence, to ensure the departure of the Assad regime, and to create conditions for the safe return of refugees. But these claims, namely supporting the SDF in northeast Syria as a tool against Iran, are problematic.

The SDF alliance was formed to fight Daesh and not Iran or the Assad regime. While some Arab units in the SDF had previous links to Syrian rebels who fought against the Assad regime, others have maintained important relations with the Assad regime and Iran. For example, one of the largest Arab components of the SDF, the al-Sanadid Forces, which are a tribal army of the Shammar tribe, has strong relations with Iran.

YPG militants in Afrin, Aleppo city, Ayn al-Arab and rural Hasakah had mainly been supplied by Iran and the Assad regime.

It is said that the Iranian Revolutionary Guard Corps were cooperating with the Sanadid Forces. Another example is Liwa Suqour al-Raqqa, a brigade that had links to the Assad regime. The largest local Syrian rebel faction in Raqqa – Liwa Thuwwar al-Raqqa – fought against Liwa Suqour al-Raqqa due to its links with the Assad regime and dismantled the group. However, the U.S.-backed and YPG-dominated SDF arrested the leaders of Liwa Thuwwar al-Raqqa.

Until today, the SDF has not fought one single battle against Iran-backed militias. Skirmishes with the Assad regime didn’t last for too long either. The most fragile tension between the SDF and the Assad regime erupted recently in Deir al-Zor over the fight for oil stations as the U.S.-led coalition stroke Assad regime militias, killing at least 100 Assad militias and Russian mercenaries as well. Even if the U.S. manages to break the YPG’s cooperation with Iran, the alliance formed in the SDF was not formed in order to combat Iran.

Does Iran support the YPG in Afrin?

With the launch of Operation Olive Branch, led by the Turkish Armed Forces and the National Army – a unit of all Free Syrian Army factions operating in the Euphrates Shield areas in northern Aleppo – Iran’s tacit support for the YPG became one of the most interesting topics. Senior Iranian diplomats and the Iranian president called for the end of the operation and emphasized their resentments against the Turkey-led operation.

While Iran’s president Rouhani called on Turkey to stop its military operation in the northern Syrian enclave of Afrin, claiming that it will only result in more deaths on both sides, he also stated: “We wish that Turkey’s operation in Syria will end at the earliest time.”

Statements made in the Iranian parliament were harsher. Member of Parliament, Muhammed Kasim Osmani, labeled President Erdogan a dictator and accused Turkey of committing war crimes worse than Saddam Hussein or Daesh in Syria. More, foreign ministry spokesman Behram Kasimi said: “Iran is following the developments in Afrin closely and concerned. We hope this operation at the Syrian-Turkish border will end soon, finishing the crisis in the area. Chaos in Afrin will enable takfiris to regroup and re-strengthen in Syria’s north.”

While many Turkish analysts and experts claimed that the statements made from Iranian officials were only “rhetoric,” developments in Afrin are confusing. If the claims made by pro-Iranian and pro-regime Al-Masdar News and some others on the ground are true, Iran and the Assad regime might then be providing the YPG in Afrin with supplies through Nubble and Zahra.

As Kino Gabriel, spokesman for the SDF said: “There are different ways to get reinforcements to Afrin, but the fundamental route is via the regime forces. There are understandings between the two…” On February 18, a senior member of the YPG told Reuters in a propagative tone that the terror group and the government of Bashar al-Assad have agreed for the regime army to enter Syria’s Afrin. On the following day, Syrian state TV announced that the regime forces would enter Afrin “within hours.” However, militias allied to the Syrian regime, the so-called National Defense Forces, did not enter Afrin and no official statement in this direction has yet been made.

Who is Supplying the YPG with Iranian Weapons?

During Operation Olive Branch, the YPG has used, visually confirmed, Iranian weapons. Among them are Iran-produced 107mm rockets, which were also found earlier in Turkey during anti-terror operations against the PKK. More remarkable was however the Iranian-produced Toophan guided anti-tank missile, which was used to target Turkish Armed Forces in Afrin. The Toophan missiles are an Iranian copy of the American TOW missiles. In addition to the Toophan system, the YPG in Afrin also used an Iranian Safir 4×4 vehicle with a mounted 106mm M40 A2 gun. These Safir vehicles were previously used in Syria only by Iran-backed Shia militias. The Assad regime is known to have no access to these vehicles. Along these, there is also ambiguity about the number of U.S.-supplied weapons transferred to Afrin.

There now remains intriguing questions as to how, where and when the YPG obtained Iranian military equipment. Does Iran’s military support for the YPG continue after Turkey launched Operation Olive Branch? Does the intense use of ATGMs by YPG militants in Afrin suggest an ongoing supply for the terrorist group? It is claimed that prior to Operation Olive Branch, the YPG in Afrin reportedly never used Konkurs. It was only after the launch of the operation that the YPG began to intensively use Konkurs systems.

It is extremely difficult to trace the chief actors of this arms delivery and it therefore remains an open question as to who supplied the YPG with Iranian weapons: Is it the Iranians themselves, the Assad regime, or the Americans providing Iranian weapons?