The visiting Iraqi Parliament Speaker, Salim al-Jabouri, has backed Turkey’s fight against the PKK terror group and said: "We are definitely against the existence of terror organizations, especially the PKK there [in northern Iraq], which can harm Turkey and the region.” 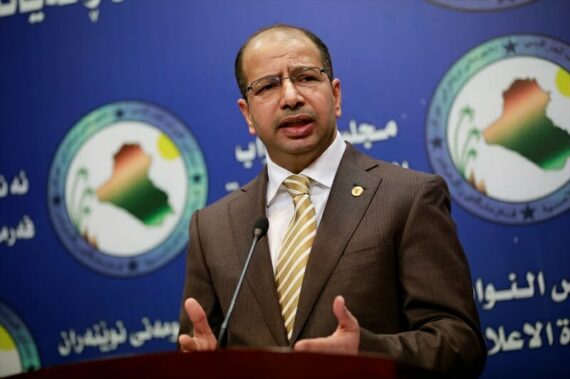 Speaker of the Iraqi Parliament Salim al-Jabouri speaks during a press conference at Parliament building in Baghdad, Iraq in February, 2018. AA

Speaking at a meeting with Turkish counterpart Ismail Kahraman, al-Jabouri said: “We are definitely against the existence of terror organizations, especially the PKK there [in northern Iraq], which can harm Turkey and the region.”

He said Turkey and Iraq would defeat terrorism jointly through “full cooperation”.

The PKK is listed as a terrorist organization by Turkey as well as the U.S. and the EU. In its terror campaign against Turkey, which has lasted for more than three decades, over 40,000 people have been killed, including women and children.

“Turkish companies have a good reputation in this subject,” he said.

Meanwhile, Kahraman said Turkey gave importance to Iraq’s territorial integrity, “which is important for the peace and stability of the region.

“Iraq’s fight against terrorism is reaching a positive conclusion…The joint move against the terror actions in Turkey pleased us as well.”

Since July 2015, Turkish jets have been conducting airstrikes on PKK targets in northern Iraq, where the terror group has its main base in the Mt. Qandil region near the Iranian border.