U.S. regional allies, the Israel-Gulf bloc’s demands toward breaking Iran’s regional influence and the rigidity of U.S. President Trump’s steps to that end will determine the rigidity of Iran’s counter maneuvers. If confronted with harsh steps, Iran will attempt to use its influence on Iraq to break the pressure on itself. While the U.S. will prefer actors in Iraq that will leave Iraq out of this tension by narrowing Iran’s sphere of influence, Iran will prefer actors that will act in its favor. 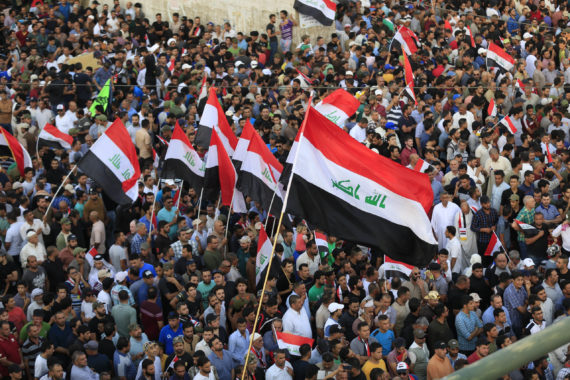 The Iraqi parliamentary elections took place on May 12, 2018 in the shadow of the concerns shaped by the profound crises the country confronted as of 2003. Leaving the sectarian discourses that determined post-2003 Iraqi politics aside, the political parties this time made an emphasis on the Iraqi nation and went to the polls with supra-sectarian lists. The Iraqi Prime Minister Haider al-Abadi’s Victory Alliance became the first party in Mosul, Moqtada al-Sadr’s Saairun coalition received a considerable vote share across the nation, and Ayad Allawi’s Al-Wataniya coalition listed both Sunni and Shia politicians. All these developments demonstrated that various political actors endeavored to address the Iraqi nation as a whole in terms of both discourse and practice.

Another matter of debate during the election process has been a question as to whether the government would be formed with a sectarian and ethnicity-based distribution of seats or with a political majority. Various circles in Iraq stressed that the presence of all the parliamentary parties in the government and the absence of an opposition blocked the political control mechanisms in the country. It was suggested that the political majority should form the government whereas those unable to enter the government should remain as opposition. Also, due to such political barriers, the corruption allegations could not be dealt with properly. Prime Minister Abadi brought the corruption allegations to the agenda and pointed out that it is time to fight against corruption following the successful anti-Daesh fight.

Another issue that was highly discussed during the election process was the relations between politics and arms. The collapse of the security sector in the country following the overthrow of Saddam Hussein, the fact that U.S. troops stayed in the country for a long time as an occupying force, the appearance of the Popular Mobilization Forces (PMF, Al-Hashd Al-Sha’abi) during the anti-Daesh fight, and the presence of a separate security sector in North Iraq led to a complicated security system in Iraq. Those making an emphasis on civilian politics, especially Sadr, defended the reconstruction of the Iraqi security sector, the complete exclusion of armed units from the realm of politics, and drawing a sharp distinction between politics and arms. Various political groups and societal segments expressed their complaints over the PMF and the Fatah coalition, who has strong links to the former. In addition, the comments of Ayatollah Sistani on the political situation, who is the most influential Shia cleric in Iraq and the leading Ayatollah in Najaf, stirred a great deal of debates ahead of the parliamentary elections.

Serious objections were made to the election results beginning from the night of the election. The Iraqi Independent High Electoral Commission announced that the votes in a total of 1024 ballot boxes were cancelled on the grounds of irregularities. Meanwhile, a number of news reports stated that several political parties are preparing to issue a parliamentary motion next week for the manual recount of votes in case the electronic tallies used in the election might be faulty. The manual recount decision will be issued if 165 parliament members vote for the motion. But such a decision is quite risky as it will unsettle the atmosphere formed by the election results. Correspondingly, the head of the Independent High Electoral Commission Riyadh al-Badran issued a statement on the subject and warned that a possible intervention in the election results might drift the country into an internal conflict.

The election results displayed that the Iraqi electorate wants reform, national unity, economic development and demilitarization while refusing to get involved in the U.S.-Iran rivalry. The one making the strongest emphasis on these aspects turned out as the frontrunner of the elections, which reflects the electorate’s will in this direction. It has been seen that Sadr hastily established contacts with the actors emphasizing the abovementioned aspects, such as Ammar al-Hakim and Abadi, and gave the signals of cooperating with Sunni political coalitions including as Al-Wataniya and Muttahidoon (the Uniters for Reform Coalition) while giving a green light to the Kurdish actors such as the New Generation, Goran and Barham Salih. Such acts of Sadr showed that he is willing to meet the demands of the electorate.

Considering Sadr’s political background and his discourse and messages before and after the elections, it is seen that he wishes to shape Iraqi politics on the basis of national consensus and a reformist perspective and render the country independent from external factors. Therefore, Sadr will probably want to cooperate with the actors close to him by eliminating political actors representing the burdens of Iraq, such as sectarianism, dependence on foreign actors and corruption as much as possible. This approach of Sadr will be quite effective in the ongoing government forming process in Iraq.

The divergence of the Shia political groups that cooperated in the past and the dissolution of the Shiite bloc in the run up to the elections showed that the Shias developed different visions on the future of Iraq. Abadi and Nouri al-Maliki, two figures from Iraq’s Dawa Party, ran for the elections on two different lists, whereas the PMF gathered the electorate from many political groups including the bases of Abadi, Maliki and Hakim and a divergence has been observed between Hakim and the Islamic Supreme Council of Iraq. These are some of the examples portraying the divergence of Shia groups. Also, the rivalries between Sadr and Maliki; Hadi Al-Amiri and Hakim; and Abadi and Maliki demonstrate the growing dissent. The spiritual leadership Sistani represents seeks to play a conciliatory role by avoiding to become a party to any side, but he does not refrain from taking a stance against crucial issues such as corruption. Alternative opinions regarding the relation between religion and politics that do not cohere with orthodox Shiism began to spread among the youth while the separation of religion and politics started to be articulated more frequently and vocally.

The number of minor and local groups increased after the dissolution of Sunni groups and some of them ran for the elections in the lists of Abadi and Fatah, which revealed that the Shia political actors in control of government bodies achieved to win the Sunnis over and the Sunni political elites failed to meet the demands of the Sunni electorate. Furthermore, it has been frequently expressed in field that the presence of the PMF in Sunni regions has a strong influence on the behaviors of the Sunni electorate and elite and negatively affected the political representation of the Sunni will. Another significant issue that needs to be addressed is the question as to whether the ballots reflect the will of the Sunnis subject to domestic migration to different parts of Iraq due to the Daesh threat. The reflection of the Sunni people’s will on politics and whether they would receive the share they demanded from the Baghdad administration will continue to be among the primary issues of Iraqi politics.

More, it has been observed that there is not any significant divergence in Kurdish politics. The Kurdistan Democratic Party (KDP) and the Patriotic Union of Kurdistan (PUK), who are the two leading actors of Kurdish politics, maintain their influence. There has been a decrease in parliamentary seats occupied by Goran and Islamic parties. It has been revealed that new political movements, such as the coalitions founded by Shahsuvar Abdulvahit and Barham Salih, enjoyed a voter support that suffices to carry them through. Despite that, it has been another point of discussion whether the Kurdish electorate found what they expected from Kurdish politics. The developments in the upcoming days will shed light on a number of issues including how the tensions in the Arbil-Baghdad line could be restored following the illegal referendum and the profound economic crisis suffered by North Iraq and how the internal balances in North Iraq will reflect on the relations with Baghdad. The attitude of the Iraqi Kurds during the government formation process will also be a major determinant in Iraqi politics.

The new political portrait that has emerged as a result of the interaction between politicians and the electorate for the past 15 years is not the sole factor reflecting the trajectory of Iraqi politics since Iraq is the leading country affected by the U.S.-Iran tension. In the following period, the character of the tension between Iran and the U.S. will shape both actors’ Iraq policies and determine the features they are looking for in their alliances in Iraq. The rising tension between these countries will negatively influence the voter-politician interaction in Iraq and the possibility of reconciliation in Iraq will increase in the contrary case. Therefore, the future of Iraq also depends on global and regional balances alongside the country’s internal dynamics, and the new government will be formed on this basis.

U.S. regional allies, the Israel-Gulf bloc’s demands toward breaking Iran’s regional influence and the rigidity of U.S. President Trump’s steps to that end will determine the rigidity of Iran’s counter maneuvers. If confronted with harsh steps, Iran will attempt to use its influence on Iraq to break the pressure on itself. While the U.S. will prefer actors in Iraq that will leave Iraq out of this tension by narrowing Iran’s sphere of influence, Iran will prefer actors that will act in its favor. As in the past 15 years, Turkey will prefer to play a balancing role to help Iraq overcome such tensions with minimum damage. In addition to this, Turkey will take on active roles in solving the water problem in Iraq, cooperation in counter-terror fight and the reconstruction of Iraq – displaying a policy rather different from those engaging in power struggle by proxy.

In a nutshell, the atmosphere prevailing after the Iraqi parliamentary elections showed the changing nature of Iraqi politics. A considerable part of the Iraqi electorate demands the solution of the country’s chronic problems, normalization of daily life and wants domestic politics to get over sectarian and ethnicity-based polarizations whilst another part still carries the burden introduced with post-2003 Iraq. In Iraqi politics, local dynamics are not the sole determinants as the U.S.-Iran conflict also has negative effects on the country. This conflict will be visible in the government formation process of Iraq and will continue to negatively affect the future of the country. On the other hand, the balancing role played by several countries in the region such as Turkey is making positive contributions to the relief of Iraqi people.