Turkey’s growing relations with Russia and the US will offer new opportunities for the de-escalation of the Syrian conflict. 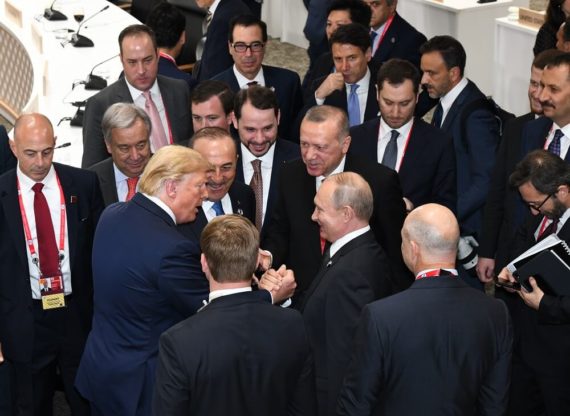 New realities have surfaced on the ground in Syria after the US and Turkey inked their mutual agreement. The partial withdrawal of the US’s troops from Syria led the PKK/PYD to cooperate with the Assad regime,m an alliance designed to restrain Turkey’s intervention by inviting regime forces to areas of critical importance. The PKK/PYD’s also attempted to keep the US’s support at the south of Turkey’s security corridor, in order to reduce the burdens of its new pledges to the Assad regime and Russia. The balance in Syria has clearly changed from its previous position. Less interested actors, such as European states, are still late to perceive the overall picture. And although Turkey has often been accused of an ‘axis shift’ due to its collaboration with Russia, this allegation may also be applied to other actors in the region who face new decisions. Hence both ‘friends and foes’ will have to reassess each other and determine to whom they can lean on. In order to understand the overall picture in Syria, the positions of each actor should be individually scrutinized.

The US was keen to provide support to the PKK/PYD and benefit from them as a tool in their plans to redesign a narrower Middle East, from Iran to Syria. But the US devastated its own policy after a long awaited decision by President Trump, most probably because of the PKK/PYD’s lack of capacity despite the billions of dollars spent by the US government.

However, internal political dynamics confused the overall process, President Trump made a U-turn in order to reiterate the ‘America First’ narrative of his election campaign. The way Trump sees the Syrian case is actually smart and pragmatic. The US has gained nothing from its relationship with the PKK/PYD, who falsely claimed credit for defeating Daesh, while the role of US Special and Air Forces in this victory has always been underestimated.

In parallel to the Iranian case and the energy politics in the Middle East, President Trump projected long term goals of the US that required him to erase the PKK/PYD folder from his cache. Although he still confused whether to embrace or repel Turkey based on his contradictory tweets, the wider politics of the Middle East, along with the Mediterranean and Black Sea region pushed President Trump to review his engagement with Turkey.

Russia’s approach has been to emphasize the Adana Agreement of Turkey and Syria which allows Turkey to intervene between 5 to 10 kilometers into Syria in case there exists a terror threat inside Syrian territory. The goal of Russia’s recent discussions at the Tehran, Moscow and Ankara summits were to have Turkey and the Assad regime engage with each other in favor of Russian interests. Such an expectation appears impossible for Turkey since Turkey expects the Genova Process to find a political solution, one that could see Assad removed pending constitutional amendments and the facilitation of free elections. Hence Russia can only push one button: choose the PKK/PYD or the Genova Process.

However, Russia does have the ‘luxury’ of including the PKK and its affiliate organizations in a new Syrian apparatus after the US’s withdrawal. The PKK/PYD’s rapprochement with both the Assad regime and Russia facilitated the expansion of Russia’s sphere of influence in shaping what will be the ultimate outcome of the Syria crisis. Meanwhile, Russia provided a shield to the Assad regime to achieve more territorial gains while the PKK/PYD terror network has been left humiliated by the imposed conditions, destined to compromise with Assad.  After all, the main question for Russia appears to be if it needs to stick with the Turkish cause as was agreed to before Operation Peace Spring or allow the PKK/PYD to serve in Syria unless the US Government changes the Syria policy one more time. On the other hand, the Genova Process seems to be a wise option for Russia in order to achieve a cost-effective resolution to the overall crisis.

The PKK/PYD has exhibited how incapable it is, and how it must lean on another actor for its own protection and survival. The release of Daesh (ISIS) prisoners proved it cannot handle its responsibilities. The success of Turkey’s military operation has marginalized its status in the eyes of its sympathizers and has tarnished its dream of building an autonomous region in Syria. The PKK/PYD has now subjected itself to a higher authority and clearly demonstrated its inability to sustain an armed movement except for the use of terror strategies. As the reality of the PKK/PYD is being understood by both Russia and the US Government, Turkey is now in-between both countries to find a wise solution to the decade-long Syria conflict.

Turkey’s political balance needs to be understood to determine its preferred course. It is a fact that the big picture of the Middle East and global politics requires Turkey to align itself with Russia. But long-term conditions will push Turkey to mend its ties with the US. However, the parameters are not that easy. Turkey need to enjoy the support of both parties to destroy the PKK/PYD threat and at the same time deescalate tense inter-state relations facilitate smoother regional politics with the USA.

At the final stage, Turkey’s growing relations with Russia and the US, along with the moderate opposition under the authority of the Syrian Transition Government, are relations which will offer new opportunities for de-escalation of the Syrian conflict. Turkey will be a bridge between the big players and effective local actors. Then should we not we think about a trilateral summit between the US, Russia, and Turkey to end the Syrian crisis?